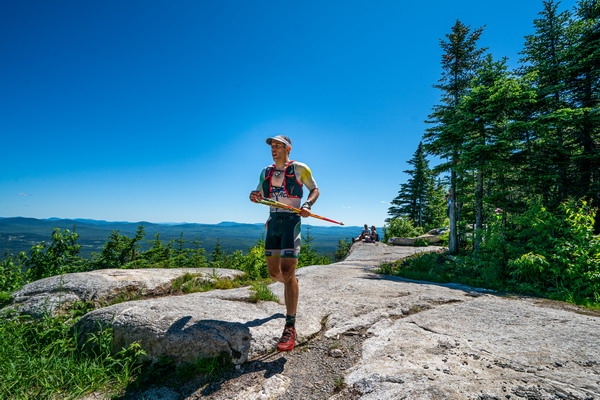 Lac-Mégantic, July 7, 2019-The third edition of the CANADA MAN/WOMAN EXTREME TRIATHLON led to very close battles all the way to the finish line on Sunday. In the end, Jérôme Bresson, from Sherbrooke, and Caroline Livesey, from Britain, were the first to reach the observatory, in mid-afternoon.

Bresson, 3rd after the 180 km biking section bridged the nearly 20-minute gap separating him from the leader to experience his second coronation at the summit of Mont-Mégantic. The 36-year-old champion completed the 225 km trek that began at 4:30 a.m. in 11:13:07, a time somewhat slower than the course record of 10:59:37 he set in 2018. He finished less than one minute in front of Sylvain Lafrance, who came in 2nd at 11:14:00.

Among the women, Caroline Livesey, 40 years old, finished just in front of Lyne Bessette, the defending champion. With what appeared to be a comfortable lead, Livesey remained in front from the start, right up to the entrance of parc Mont-Mégantic. However, her lead melted away as the women got closer to the sun. Bessette's strong trail running talent made it possible for her to pursue the British racer in the final straight. Her final push was nonetheless too little, too late, and Livesey crossed the finish arch 10 seconds ahead of her. Livesey finished in 12:10:33 whereas Bessette's time was 12:10:43. These times earned them the 7th and 8th spots in the overall ranking.

As was the case in 2018, Joannie Desroches completed the women's podium (13:25:50, 27th in overall ranking). The 32-year-old from Montreal improved her time by nearly an hour compared to the previous edition.

Jordan Bryden, from Alberta, who was in the lead at the end of the 180 km biking section, experienced few problems along the running course and was forced to slow down, paving the way for Bresson and Lafrance. For his first presence in the Lac-Mégantic territory, Bryden, 32 years old, finally arrived at the summit 10 minutes after the two leaders, at 11:21:08. "Lake conditions were perfect and I am very happy with what I was able to do in the biking section," explained Bryden, "However, I felt weakness in one of my ankles. That happens in run trails. I don't want to make excuses, but that definitely affected the technical aspect of my race."

Although Bresson succeeded in hanging on to his title, he faced adversity. Suffering from bronchitis, he seemed surprised to see a time of 00:59:41 as he exited the lake, nearly two minutes faster than his 2018 time. At the one-third mark of the biking section, he had gone from 11th to 3rd place, near Route du Morne in Lac-Drolet. "But after 140 km of biking, I was done," admitted the third-time Lac-Mégantic participant, "The last climb was hell. When I sat down in the transition, my tank was empty. I was tired. My legs just weren't doing what I needed them to do at the start of the running section. I stopped. As I walked, I even wondered what I should do. My goal wasn't to win, but I knew I was in a good position so how could I not want to maintain it and fight to the end."

Lafrance, 43 years old, from Victoriaville, also took advantage of the difficulties Jordan Bryden faced to improve his position. "I never thought I would be able to finish with a time like this," told Lafrance, who slashed 40 minutes off his 2018 time, "I must say that I really pushed to try to catch Jérôme. I needed a few more seconds. Maybe next time."

Successors For The Women's Category

This was Livesey's first start on the XTRI WORLD TOUR and she chose Canada to be her playground for her debut on this circuit. "It was amazing, but so difficult," stated the 40-year-old professional triathlete, who began trail running just four months ago, "I had never participated in an extreme triathlon like this before. I didn't find it that difficult to stay focused, but physically…wow! I can't believe how difficult the climbs in the biking section were, especially the last one that took us to the second transition zone."

Lyne Bessette nearly won her bet. For her swan song, the 43-year-old Olympic athlete from Sutton hoped to win for the third time in as many years in Lac-Mégantic. "I would have liked that! I wanted a hat trick! But in the end, I almost got it."

After she reached the finish arch, she announced that the 2019 CANADA MAN/WOMAN would be her last. "If I had won, I might have come back," she explained with a smile, "But no, I think this was my last participation."

Bresson was the first one to reach the summit. He qualifies as a "human machine". Eight days prior to the Canada Man/Woman, the Eastern Townships native took part in the Canadian Ultra Trail Championship in Quebec. He completed the 110 km course in 12:60:06, in 6th place overall.

In a few weeks, Bresson will fly to Norway, where he will participate in the Norseman for a second consecutive year on August 3rd, with hopes of facing less favorable meteorological conditions than those he faced during the 2018 event. "The Norseman is known for difficult weather conditions," adds the Canada Man/Woman champion, "Yes, the course is challenging, but when the weather is calm, it is more accessible. I would even say that, compared to the Canada Man/Woman, it is easier on some levels, especially the biking section since it ends with a 30 km descent, whereas here, we finish with the magnetic hill."

Bresson's victory for the Canadian event will also lead him to take part in the 2020 XTRI WORLD CHAMPIONSHIP, held during the mythical Norseman.

The 2019 edition of the CANADA MAN/WOMAN will have been the first to see a woman from the Lac-Mégantic region reach the stars. Maïté Galipeau Théberge, 27 years old, from Piopolis, finished 4th among the women with a time of 13:44:56, 34th overall.

About the CANADA MAN / WOMAN and ENDURANCE AVENTURE

CANADA MAN / WOMAN is one of the twelve races that make up the XTRI WORLD TOUR, a circuit that pushes athletes beyond what they thought to be humanly possible with the Norseman, the Celtman, the Swissman, the Swedeman, the Jánošík — Slovak, the Icon, the Hispaman, the Patagonman, the Manx, the Blacklake, and the Fodaxman.

The TRIATHLON SPRINT presented by Tafisa on Saturday was a prelude to the EXTREME TRIATHLON. Philippe Tremblay won in the men's category for the second consecutive year. Mireille Rodrigue climbed onto the podium's first step in the women's category, at the end of this adventure experienced by nearly 400 athletes at Lac-Mégantic's Complexe Baie-des-Sables. Individually or as teams, participants experienced an accelerated version of the EXTREME TRIATHLON, with a 750 m swim in lac Mégantic, 20 km of biking along the Route des Sommets, and 5 km of running along roads and trails.

An Extreme Adventure To The summit of Mont-Mégantic
On Sunday, July 7th, more than 200 athletes from approximately twenty countries will take on an exceptional personal challenge as they take

Free Trip Competition Winners Announced
At the beginning of February, the Canada Man/Woman organization team launched a contest: the 1st prize winner would be awarded a free