High Speed Racing In The Mountains 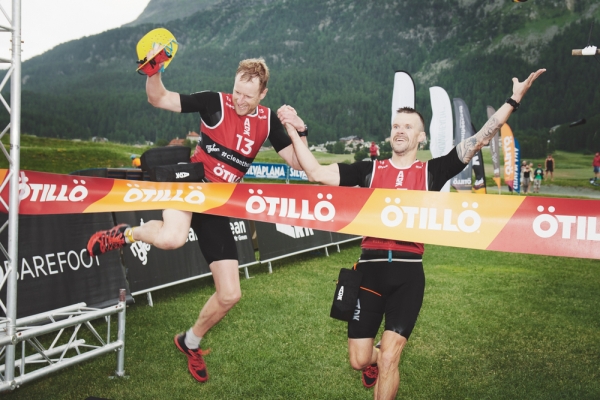 The fourth ÖTILLÖ Swimrun World Series race of the season and the last qualifier before the World Championship in September became a fascinating race.

This sixth edition of ÖTILLÖ Engadin saw nerve-wracking racing at the front again but with some new winners showing that they also are ready for the World Championship in September.

The Engadin Valley in Switzerland is one of the most beautiful race locations with fantastic trails, hanging glaciers and pristine mountain lakes. The total course is just short of 46 km with a total elevation gain of almost 1600 metres, of which almost 40 km is on foot and 6 km is swimming.

The Race in Detail

“We had to push hard on the running sections in the beginning to try to make a gap, which we managed to hold throughout the day. You can never rest, either you’re going up tough uphills or you’re going fast downhill, legs almost exploding. We tried to control the race and we were fortunate to manage,” said the thrilled winners Joakim Brunzell & Johan Carlsson; Team Simployer (SWE) after finishing as overall winners.

The course provides an original setting for a swimrun race, as runners in wetsuits are not quite expected in the alpine terrain. But it is the ideal landscape for swimrun, with challenging, technical alpine trails to run on and emerald green alpine lakes to swim across.  Besides the difficult elevation, the near 46 km course consists of almost 40 km trail running, sometimes very technical, and almost 6 km open-water swimming at eight different swim sections in the cold mountain lakes. The teams of two swam in a water temperature of around 13 degrees C, cooling them off after the tough runs. They had 16 changes between running and swimming throughout the course,

Despite a grueling race course the backdrop of ÖTILLÖ Engadin is nothing but spectacular. High mountains with snowy peaks reign over the valley with its scenic lakes, cows and horses grazing on the flowery meadows, close to the picturesque alpine villages surrounded by magical pine forests. It truly is a unique and original swimrun experience that many teams come back to year after year.

ÖTILLÖ Engadin started the international swimrun movement, as the first race ever outside of Sweden for its first edition in 2014

During the middle of the day a rain storm came through making it tough on some of the already cold teams. Besides that the conditions were near perfect.

Several teams had to struggle to make it in time for the two cut offs. Some had to abandon along the way.

The top teams pushed each other hard, chasing each other in a tight group all the way to the finish line. The level of competition has real exploded!

At all ÖTILLÖ swimrun World Series events teams race in pairs. Working wisely with your partner is decisive. Using each other’s strengths will push boundaries. The team experience is incomparable and can only be fully understood by those who have practiced it, and is part of why swimrun is growing so fast in popularity.

116 teams of two from 22 different nations travelled to the Engadin Valley to compete in the ÖTILLÖ Engadin, the last qualifier to ÖTILLÖ, The Swimrun World Championship 2019, which takes place in the Swedish archipelago.

The day prior to the race two shorter more accessible race were organised, the ÖTILLÖ Sprint Engadin and the ÖTILLÖ Experience Engadin, offering the same flavours as the longer more challenging race but in a smaller format.These races had close to 250 racers registered from a total of 22 nations.