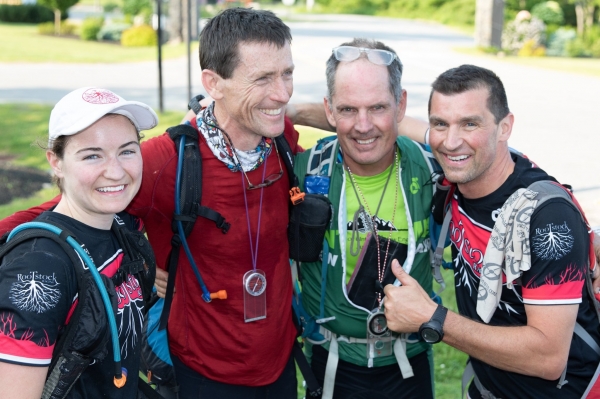 U.S. National Champions Rootstock Racing won the co-ed elite division and took first place overall in the fourth annual Maine Summer Adventure Race, held in and around the Portland area on June 22 and 23.

Rootstock teammates Nicki Driscoll, Brian Reiss and Mark Lattanzi raced alongside soloist Dave Lamb for the entirety of the race, as the rival teams combined forces after Lamb lost both his Untamed New England teammates to injury in the week before the race. Close behind Rootstock were Rob Hillman, Nick Cassotis, Mason Holland and Glen Lewis of New Hampshire Trail Vets, the winners of the open division and the third-place overall finishers.

The 24-hour race saw racers start with an individual orienteering challenge at the Pineland Farms outdoor recreational facility, followed by a 40-mile bike leg that included 25 miles of singletrack. Most teams were on the water by 2 p.m. Saturday, riding the Maine Summer Adventure Race’s marquee sea kayaks four miles down the Presumpscot River and into Casco Bay. In the bay they battled stiff winds to do a 14-mile loop around Casco Bay, highlighted by a visit to the historic Fort Gorges, where they climbed darkened stairways in the Civil War-era fort to find two checkpoints on the fort’s ramparts. Several teams were lucky to arrive at the fort at sunset and were rewarded with a stunning view of electric-pink skies over the picturesque city of Portland.

The kayaking stage ended with teams landing on Portland’s East End Beach and the race continued with an urban orienteering leg through the city’s bustling downtown area. A few teams couldn’t resist stopping for a quick lobster roll (or two) as they ran through Bon Appetit Magazine’s 2018 Foodie Town of the Year. The five-mile section ended with a jog over the Casco Bay Bridge into South Portland, where teams transitioned back onto their bikes for a 20-mile urban mountain bike leg utilizing locals-only trails with undulating boardwalks and a sandy beach section.

As night set finally set in (the race took place the day after the summer solstice), teams arrived at the Blackstrap Preserve for a 14-mile point-to-point trekking leg, which featured lots of optional points offering varying degrees of navigational difficulty. The fastest teams took more than five hours to clear this stage.

Thinking they were heading for the finish line, teams blasted back to Pineland Farms on 18 miles of bucolic back roads as the sun began to rise. But when they arrived at Pineland, they were greeted with one final challenge – a hike/bike combination leg. Each hiking point was linked with a biking point, with each pair worth two points. With time left in the race winding down, teams had to make a difficult strategic decision: whether to be aggressive or conservative in going for a total of eight points, with four checkpoints hidden in thick woods nearby and four checkpoints hidden on Pinelands rolling mountain bike trails.

At 7:44 a.m. on Sunday, with just 16 minutes remaining in the race, Roostock Racing and Dave Lamb emerged from the woods to claim the joint title of victors, obtaining 63 checkpoints out of a possible 66 CPs.  A few other teams, including New Hampshire Trail Vets, arrived with just seconds to spare, using every possible moment available to them to try to maximize their scores.

“This course was sneakily difficult. I think it was trickier than many teams might have expected, considering the course went through many of Maine’s most populated areas,” race co-director Kate White said. “We wanted to show off how great we have it in this state – that you can link up amazing singletrack, stunningly beautiful ocean paddling, and trekking in large areas of classic Maine pine forests, even with a stop for an award-winning dinner on the way.”

White said her race organization, Strong Machine Adventure Racing, became a nonprofit this year with the goal of growing the sport of adventure racing in the U.S. Northeast.

“We’re thrilled to see so many teams stepping up and challenging themselves to take on a 24-hour adventure race, especially those teams with first-time racers,” White said. “It’s exciting to see the sport growing here. We want to continue to build on New England’s reputation as a powerhouse of adventure racing nationwide, and a destination for racers from across the country and internationally.”

Strong Machine Adventure Racing will next host the Wildlands Adventure Challenge in Orland, Maine, on October 13, 2019.