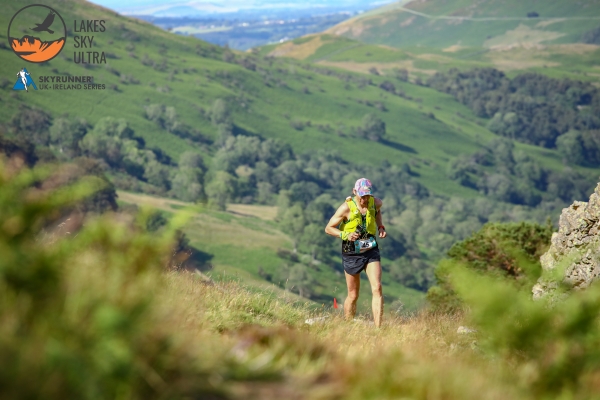 The 2nd race in the Skyrunner UK and Ireland Series 2019 was played out last weekend in the central and eastern fells of the Lake District.

The event was delivered by the slick and experienced team from the Lake District Sky Trails office, who are based in the heart of the UNESCO status English Lake District at Glenridding.  The new events centre at Patterdale Hall offered awesome and jaw dropping views of the surrounding fells as runners from all over the world arrived on Friday evening to register for one of the toughest races of its kind in the UK. Nationalities represented in the field included runners from England, Scotland, Wales, Ireland, Poland, France, Latvia, Slovenia, Sweden, Spain, Portugal, Austria, Canada, Lithuania and the USA.

The race was dominated in the first half by Andy Berry, who won the event in 2017 and took the 3rd place last year. Berry was going all out to either take the win or crash and burn. It seemed that the humidity and heat of the day got the better of Berry around Kirkstone Pass and Andy Bryce from Scotland took control of the pace and opened a gap on the ascent to the summit of Red Screes.  Bryce, who finished 3rd in 2017 was on a one-week return to home from the Middle East and seemed to cope well with the heat. Bryce continued to dominate the second half of the race taking the win in a time of 08:46:18.

Phillip Rutter and Andy Berry raced hard against each other jostling for 2nd and 3rd places, but with Rutter pushing harder than Berry could match, he was close to catching Bryce, and crossed the line in 08:49:05 only 3 minutes down.  Rutter said, “It was the first race of this type I’ve done and I loved every minute of it, the course was awesome and extremely hard”. Berry fought the heat to finish in 3rd place in 08:57:03.

New Zealand runner Sophie Amy Grant dominated the women’s race from the start, with Polish runner Kasia Osipowicz, offering a challenge in the first half, but Grant pulled away to create a gap that Osipowicz couldn’t close. Grant said at the finish; “I thought I had the race on my hands in the first half, but with opening the gap I quickly realized 1st place was in the bag”. Hannah Walsh put in a fantastic effort to take the 3rd place in the Lakes Sky Ultra 2019.

The Lakes Sky Ultra started at 06:00 under grey skies with the promise of sunshine later in the day. Runners soon realized that the grey skies offered no hiding place from the seriously close and muggy conditions with dehydration and heat exhaustion becoming a serious a battle in itself as the roller coaster course unfolded bringing ascent after ascent to batter the runners in to submission.

Charlie Sproson, the race creator and director was quoted saying, “We didn’t feel the heat of the day at 06:00 when the race started, but it soon became evident that the air was stiflingly close for the runners and events team alike”.

The race was originally started in Ambleside and did have technical climbing sections, however a re-design took the climbing sections out while still keeping some highly technical terrain. The Lakes Sky Ultra will now appeal to runners operating in the classification of “Sky Ultra” alongside races such as the famous Zegama Aizkorri in the Pyrenees, Trail du Besso in Switzerland, the Audi Power of Four Trail 50km and other European sky ultra distance races. It’s also comparable to other hard mountain races like the CCC and TDS in the Chamonix Valley.  The race is now a ‘true’ mountain sky ultra and starting in the valley of Patterdale, where the race director lives, offers a wonderful ‘mountain’ feel to this extremely tough course.

Sproson said, “We had always wanted to start the race in the Patterdale Valley so we made the move knowing the competitors would appreciate the awesome surroundings of the fells in this valley. Patterdale Hall offered the right vibe and we look forward to delivering the race from this location for many years to come.”

When Sproson was asked why did the LDST team remove the climbing sections he replied, “We found that many runners wanting the distance and ascent profile, didn’t actually possess the ‘climbing skills’ necessary to complete the route safely, so we removed these and created a new EXTEME race, called Pinnacle Ridge Extreme and kept the main element of the ultra sky distance for Lakes Sky Ultra”