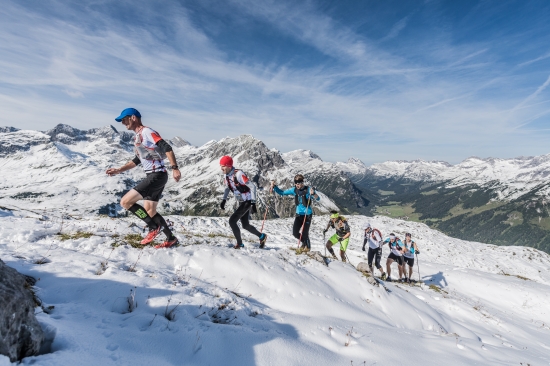 The Transalpine Run is celebrating an anniversary. For the 15th time the starting signal for one of the hardest und most spectacular trail running competitions of the world will be given on August 31 in Oberstdorf.

Over the Alps in eight days – on foot and in teams of two. It’s an extreme physical and mental challenge of 273.8 kilometers and 16,150 vertical meters, for professionals and amateurs in equal measure. The anniversary route leads over the villages and cities of Lech, St. Anton, Landeck, Samnaun, Scuol and Prad to Sulden at the Ortler, where on September 7 the finish will be reached. This year back again on the program: the mountain sprint in Samnaun.

With 300 teams out of 40 nations, the starting field is already complete. This demonstrates that even 14 years after the first event, the Transalpine Run hasn’t lost a bit of its unique attraction. For those who are not sure that they can manage a complete Transalpine Run, there will be the possibility to compete in the RUN2, which leads over the first two stage and brings you step by step closer to the big dream of an Alpine crossing.

The world’s biggest stage race for teams of two over the Alps is young as ever. A lot has changed since the premiere in the year 2005, but the adventure of running across the Alps within eight days has stayed the same: passing high alpine landscapes and having great panoramas as well as being exposed to the challenges of nature day by day.

What has made this race so fascinating over all those years?

Holger Schulze and Jürgen Kurapkat reveal some secrets of the “TAR”. The two have been participating from the beginning on. Holger Schulze – the record man – has finished 108 stages. Within those 14 years TAR he has done 3,700.43 kilometers of trail as well as 210,191 vertical meters. These numbers demonstrate that the TAR is a legendary event.

The Transalpine Run has set benchmarks in all fields. It all started in the year 2005, when 74 teams set off for the first time in Oberstdorf to run across the Alps. Back in that time, Holger Schulze from Munich was already in the starting field as a Nordic Walker. He belonged to the marathon scene and was looking for the big adventure, which he found in trail running, and stayed with that sport. Today he is 52 years old and has not missed a single TAR in the last decades. He finished all stages and had to go through ups and downs.

“You don’t remember the downs that good, but of course the highs. It took me a few years to be successful”, he says. At the premiere in the year 2005, he made the penultimate place with his partner Lothar Schiller. “At that time, we didn’t know what we had to cope with. We were walking rather than running”, Schulze says. Twelve years later he entered his 100th stage and celebrated his first victory in September 2017 in Prad at the Stilfserjoch. “It was incomprehensible”, remembers the man from Bavaria. Schulze had to hide a few tears when the big TAR family congratulated him and the event organizers Uta and Heinrich Albrecht gave him a special leadership-shirt for his 100th stage.

“Of course, a few things have changed at the TAR since the premiere in 2005. The event got bigger and more professional, but what makes the TAR so special has stayed the same: the family atmosphere, the friendliness”, says Schulze. “The Transalpine Run week is the best in the whole year for me. I can completely get away from it all, go through so many wonderful moments and make new friends.” So far Schulze has already completed 108 stages and likes to give the following advises to all beginners: “Specially in the beginning, portion your power wisely, don’t lose the fun and create a relationship with your partner. Even though, it is not your dream partner you’re running with, try to take problems and differences in performance easy”, says Schulze.

Jürgen Kurapkat – Co-Founder of the TAR

For the first time, Jürgen Kurapkat is competing with Holger Schulze as a partner this year. For years, those two were rivals in the sport, but always connected in friendship. Now they will set off from Oberstdorf into the direction of Sulden together as a team for the first time. That’s really something totally new. Jürgen Kurapkat was the one who convinced Holger Schulze in 2005 to start at the TAR. At that time, Kurapkat was working in public relations at the W.L. Gore Footwear Division, while Schulze was managing finances in their public relations agency. Jürgen Kurapkat not only has been participating in the TAR since the very beginning and has finished about 100 stages, he is also one of the founders of the TAR, next to Uta and Heinrich Albrecht. He could have made all 108 stages, but there were two or three years, when the man from upper Bavaria had to end the TAR on day five because of his job.

The 52 years old man has seen a lot over the time. He has accompanied the changes actively and seen how the TAR developed into an international recognized trail running event. “The event has become bigger with more runners, more sponsors and more side-events. It looks like the level of the runners has risen enormously and they become younger and younger. But maybe that’s because I am a senior master meanwhile”, says Kurapkat, who even 14 years after the premiere is still fascinated by the TAR: “The main character of the TAR and its fascination have stayed the same. It’s a unique mixture of competition, colleagueship and friendship with other runners. Calling it the TAR family may sound stereotyped, but in fact, the togetherness is unique. The intensity caused through the duration of the event and through racing with a partner is one of a kind. The week at the TAR feels like three normal weeks.”

Kurapkat also praises the stage crews. “The trails have become better and better. Even though, some of the locations and stages were similar on the paper, the crews have constantly come up with new trails.” He is also happy about the professional organization, the food stops, the marking and labeling, the teams on route, the luggage transport, briefings as well as the media relations with pictures and videos each day.

Heini Albrecht – An adventure in Civilization

Organizer Heini Albrecht, CEO of the PLAN B event company, remembers exactly the first event and the motivation to set up such a competition. “For me, there a three special factors, that have created the fascination and still do. For once, there is the dream of crossing the Alps on foot. A lot of people want to do that once in their lifetime. On the other side, there is the challenge of reaching something nearly impossible, at least for the non-professionals who build up the main part of the crowd. And maybe there is this thing about an adventure in the middle of civilization.”

Uta Albrecht also points out the fact of the adventure: “Based on the many positive stories the participants tell about this race, a lot of endurance sportsman and women want to experience that adventure by themselves. Some of them train hard for years and keep thinking of the event while they are running.  That’s insane.”

The Challenge For Men And Material: The Figures

The TAR is not only an extreme challenge for the participants. It is also one for the people behind the race, the crews and the material. Safety has been important from the first day on. So far 185 doctors, paramedics and nurses have been on duty. They have been handing out 6,886 blister pads as well as 6,550 cooling packs. They treated 241 emergencies and 622 big wounds. The emergency equipment that has been carried over the Alps sums up to 4.7 tons. Safety first is the most important command at the TAR.

To make sure everything goes right, and nobody does run the wrong way, there is always a marker team on the route. They have used 1,210 cans of chalk-spray, mounted 6,720 arrows, 2,220 distance-signs and 7,450 marking-poles, and collected everything at the end. The conclusion runners brought back 8,6 tons of material. Although some of the signs didn’t come back. The 210 lost signs probably are now used by fans to decorate their garages.

While running that much, the competitors must eat a lot. That’s why the feeding stations care for their nutrition. It’s unbelievable how much food has been cut and prepared in 14 years. Here are some figures from the menu: 11,000 kilograms each of bananas, oranges and melons as well as 1,200 kilograms of tomatoes, 2,700 kilograms of cucumbers and 2,800 kilograms of apples. Bread, cheese, salami, nuts and raisins were used 900 kilograms each. Additionally, there was needed gigantic 3.22 tons of pasta.

All those figures are outreached by the numbers of dietary supplements: 114,600 energy-bars and 117,600 energy-gels were handed out. That comes up to a total of 46.2 tons of food, which has been handed out over the last 14 years. Besides, there were 146,480 liters of drinks that were needed. Water was the most popular one and sums up to 69,760 liters.

An Emotional Finish in Sulden/Ortler Italy
Persistence, raw emotion, team spirit and camaraderie, these are the foundations of one of the greatest tests of human endurance, the

Testing Conditions For The Penultimate Stage
Inclement weather, coupled with testing trail conditions, lay in wait for the remaining 538 participants as the penultimate stage of the

Into The Swiss Alps on Day 6
With the 15th edition of the Transalpine Run entering its final stretch, the 40km sixth stage would see competitors leaving Samnaun for the

Mountain Uphill: A Rest Day For Some, A Race To The Top For Others
From the longest stage to the shortest stage, and the halfway mark of the 15th edition of the Transalpine Run. The fifth stage Mountain

On The King's Stage
Otherwise known as the “King's Stage”, the fourth stage of the 15th edition of the Transalpine Run is a brutal yet classic

Swiss Continue to Dominate the Transalp
Persistent rain throughout the night, ultimately presenting runners with some slippery and challenging terrain, would do nothing to dampen

Into St. Anton on Day 2
Cloudy skies over Lech am Arlberg greeted the runners on stage two of the 15th edition of the Transalpine Run as they readied themselves