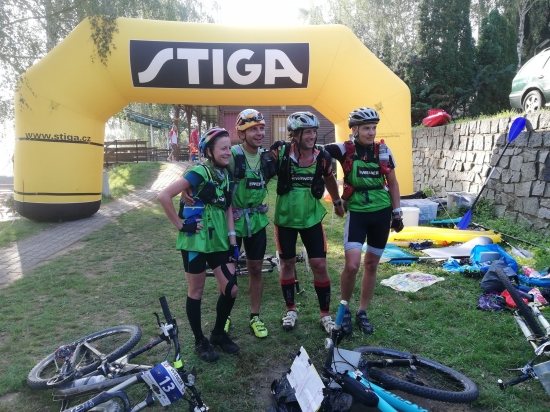 On the last day the route was shortened for teams from the bottom of the ranking, but all teams had to complete traditional discipline called Bolscross. „What the hell is Bolscross?“  It is is an obstacle route in woods or in an old flooded quarry, as was the case this year.

The racers pass through a corridor over a hilly track where they have to climb over large boulders and steep uphills or abseil into the water and climb on rope nets back up.  The route is named after its author, Mr. Bols, who loves to build these courses. The racers enjoyed the track for about one hour and praised the diversity of the route. Bolscross was also point where some teams met and got to know the gaps among others and final chasing could begin.

The first two places were set and did not change till the end of the race but after the Swedish teams withdrawal the battle for the 3rd place began. Czech “HSK Benecko Sport nás baví“ and “klacky.cz/EPO“ were the competing teams with minimal distance between them. Both teams did their best but two hours before the finish team HSK Benecko found more power and left klacky.cz, who just stayed ahead of the fifth team Metsapeatus from Estonia behind them.

The race took place at a large water reservoir this year and teams enjoyed the water a lot. Not only during the paddling and initial coasteering but also when they made shortcuts on the treking stage.

The hot weather caused thick morning fog which made orientation very difficult. For example one team arrived back at the start after a few minutes of paddling just because they did not see a thing and were paddling in a circle. Another team was swimming together with their headlamps on and one of them switched it off and the others were shouting at him whether he was drowning.

The winners of the Wenger Czech Adventure Race were the “AR Team“, who arrived from Ukraine. They managed the route in 48 hours and 5 minutes and as they said during the prize giving ceremony they made only two small mapping mistakes. Three and half hours later  and in second place were the Czech team Salomon Suunto CZ AR, and in the third place were another Czech team „HSK Benecko/Sport nás baví“ after more than 53 hours on the course.

AR Team Ukraine Move Into The Lead On Day 2
This was a very long day full of paddling at the Wenger Czech Adventure Race. Gaps between teams enlarged. Racers were riding back to the

A Lot of Adventure For a Small Price
The 16th edition of Wenger Czech Adventure Race begins last Thursday of August! The organizers have set up a route about 400km long.