Swiss Continue to Dominate the Transalp 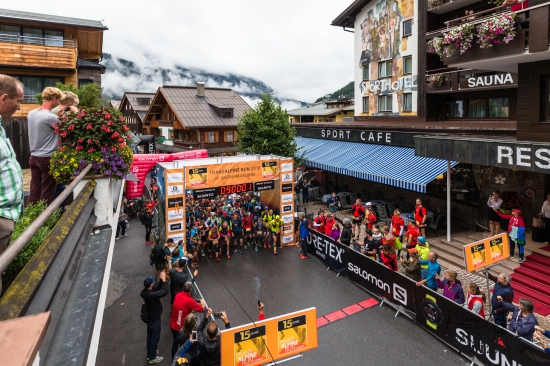 Persistent rain throughout the night, ultimately presenting runners with some slippery and challenging terrain, would do nothing to dampen the spirits of the remaining 285 teams as they embarked on their journey to the ancient Austrian town of Landeck, the third stage of the 15th edition of the Transalpine Run.

With many runners now beginning to settle into their “Transalpine rhythm”, it would be the overall leaders in all categories extending their leads as the race nears the halfway mark, and the longest stage to Samnaun. The stage wasn’t without its casualties, with one competitor sadly forced to retire after of a severe, but not life-threatening fall.

Continuing the Swiss dominance at the sharp end of the racing, overall leaders in the MENS category, brothers Stefan and Martin Lustenberger of Team Willkommen im Sonnental, maintained their calculated assault on the finish line, finishing in 3:58:01, 10 minutes ahead of Ramon Krebs and Gabriel Lombriser of Team Salomon Running Schweiz who finished in 4:08:07. With a 29 minute lead in the overall standings, the brothers are by no means home and dry: “We're certainly beginning to feel the effects of the stage racing,” Said Stefan “but we'll continue to focus on each day and work as hard as we can”. Mike Baumgartner and Adrian Zurbrügg of Team Daniel Schürch Ag, seemed to have taken their foot off the pedal somewhat, finishing a further 5 minutes adrift to round out the podium in a time of 4:13:17.

In the WOMENS category, and adding additional advantage to their overall lead by almost 30 minutes, the German duo of Suse Spanheimer and Ida-Sophie Hegemann of Team Salomon Running Deutschland once again took line honours, winning the stage in 4:41:05, an impressive 12th overall. It seemed that the stage two effort of Susi Lell and Marie-Luise Mühlhuber of Team Salomon Running had taken its toll, crossed the finish line visibly fatigued in 5:10:07. "My left leg simply did not want to go anymore, even on the first ascent", said Lell who was also grateful for the support of the other competitors willing her on. Mühlhuber, chiming in on the day's performance was equally frustrated: "I just do not like long pieces of asphalt or downhills that are not technical.” Nataliya Mamaeva and Elena Anosova of Team Blond Power maintained their third position finishing a further 31 minutes off the pace in 5:28:46.

Enjoying a third consecutive stage victory, Stephanie Kröll and Martin Kaschmann of Team Mountainshop Hörhager, took the stage win in the MIXED category in a time of 4:53:12, extending their overall lead over fellow Team Mountainshop Hörhager members Patric Hörhager and Christina Sautner by 15 minutes. Hörhager and Sautner, would finish the stage in 5:08:25. Mathias Galler and Kathrin Schichtl of Team Lauftreff Hohenems, having made the podium the day before, once again took third position in 5:22:30.

It would be in the MASTER MIXED category, where the third stage would serve up some exciting racing, with the top 4 teams all finishing within a few minutes of each other in Landeck. Hella Schmidt and Petru Muntenasu of Team Leki took the stage win in 5:05:13, just 65 seconds ahead of second placed finishers Alexandra Gundel and Roland Schindele of Team STW Allgäu Isch Schee who finished in 5:06:19. Overall race leaders, the Italian duo of Lord Jens Kramer and Irene Senfter of Team Sulden, took third place for the stage in 5:06:35, 29 seconds adrift.

After an early start in Landeck (809m), the first section of stage four takes runners via Hochgallmigg (1218m) and the Landecker Skihütte hut (1766m) to the Fisser Joch ridge (2432m) where the first aid station awaits. From there they head to the Kölner Hütte hut (1965m) and via the Böderweg trail along the Böderbach stream to the next ridge, the Arezzjoch (2587m), where they find the second refreshment station. The highest point of the day, the Ochsenscharte (2787m), is followed by a downhill section to the Stierhütte hut (2290m) on the Swiss border (1725m) and the third refreshment station. The final section is relatively flat all the way to the finish in Samnaun (1841m).

An Emotional Finish in Sulden/Ortler Italy
Persistence, raw emotion, team spirit and camaraderie, these are the foundations of one of the greatest tests of human endurance, the

Testing Conditions For The Penultimate Stage
Inclement weather, coupled with testing trail conditions, lay in wait for the remaining 538 participants as the penultimate stage of the

Into The Swiss Alps on Day 6
With the 15th edition of the Transalpine Run entering its final stretch, the 40km sixth stage would see competitors leaving Samnaun for the

Mountain Uphill: A Rest Day For Some, A Race To The Top For Others
From the longest stage to the shortest stage, and the halfway mark of the 15th edition of the Transalpine Run. The fifth stage Mountain

On The King's Stage
Otherwise known as the “King's Stage”, the fourth stage of the 15th edition of the Transalpine Run is a brutal yet classic

Into St. Anton on Day 2
Cloudy skies over Lech am Arlberg greeted the runners on stage two of the 15th edition of the Transalpine Run as they readied themselves

15th Transalpine Run: A Legendary International Event
The Transalpine Run is celebrating an anniversary. For the 15th time the starting signal for one of the hardest und most spectacular trail