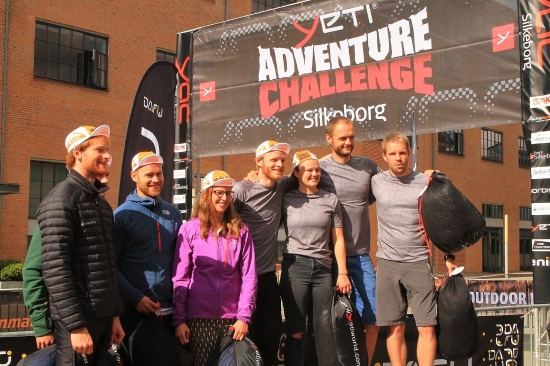 European Series Adventure Racing returns to Denmark this week at the Yeti Adventure Challenge Silkeborg (YACS).  The 410km Masters race is the last of six in this year’s European Series and next year the race will be the hosts of the European Championship.

The race this year has entries from France, Germany, Ireland, and even one from New Zealand, and they will be racing against some of the best Danish teams. These include recent AR World Series winners Team Yeti, who will be defending their title at YACS, and the mixed ARES course teams will be competing for total prize money of 10,000 Euro (the highest in Europe), plus there are equipment prizes from race sponsors Yeti for the other categories and distances.

YACS has been organised since 2005 in cooperation with the local orienteering club, and has steadily grown from a small local race to one of international standing. The event includes races of 3 different distances (Challenge, Fighter and Masters) to encourage mass participation, and has in the past been the Danish Championships and had Frederik the Crown Prince of Denmark as a competitor.

In recent years the skills and experience of the organising team, many of them racers themselves, has helped build the event towards the European Championships in partnership with the host town of Silkeborg (Denmark’s Outdoor Capital), and race sponsors Yeti.

In 2016 World Champions Team Seagate raced the event and found the low hills of Denmark and the intense navigation challenging when they finished second to Team Yeti.  Then in 2017 the Masters course was extended to expedition length and the race moved onto the international calendar joining the AR European Series.

This year’s Masters Race starts on September 5th, and will be an A to B course finishing in Silkeborg and is expected to take teams between 40-60 hours. Teams are told the route will be 30% paddling, 30% trekking, 38% MTB, 2% climbing ... and most importantly 100% navigation!

There will be a sea kayaking stage for the first time, as well as paddling on rivers and lakes, of which there are many in the region around Silkeborg, also known as the Danish Lake District.  Denmark isn’t mountainous but the terrain is varied with heathland, grassland, remote coastlines and extensive forests, which include hundreds of kilometres of mountain bike trails.  The complex network of trails and waterways means that teams will have to be constantly vigilant with navigation.

This year the Course Director is Simon Grimstrup who says, “I am really happy with the course - it is a true expedition race, and that means that teams literally go from A to B, without any loops.

“The teams will experience a lot of different Danish nature from the rough west coast on the Atlantic Ocean, to the fiords with all their seals and birds, not to mention the difficult navigation among islands. Inland they will cross some of the flat moor-lands, and finally end up in the hilly area around Silkeborg.

“Along the way they will also experience some very nice historic sites as well.  I am really looking forward to showing some lovely parts of Denmark to the teams and for them to have a great journey. I have designed a course I would like to race myself.

“The challenges for them will be some difficult orienteering, a tough kayak-stage, the hilly terrain, and of course the weather, which in September can be an Indian Summer or autumn gales! Luckily the waters are still warm which makes all water activity a lot safer!”

Teams will gather in Silkeborg from September 4th and there will be a prologue in the town for the Masters race at 15.00 on Thursday 5th before teams are bussed to the undisclosed start line, ready for the race start at 19.00.

The Masters race always finishes in central Silkeborg alongside the completion of the Challenge and Fighter courses.  The shorter races have hundreds of competitors and many of the challenges take place in the town itself, so the combined finishes attract large crowds to watch the teams, making the final day of competition a true festival of adventure racing.

You can find out all about the Yeti Adventure Challenge Silkeborg at www.yacs.dk, and during the race there will be live tracking for dotwatchers to follow the teams. SleepMonsters.com will once again be at the race as a media partner with Anne-Marie Dunhill reporting live from the course.

To find out more about the Adventure Racing European Series visit; http://www.areuroseries.com/