Who Saved The Best For Last? 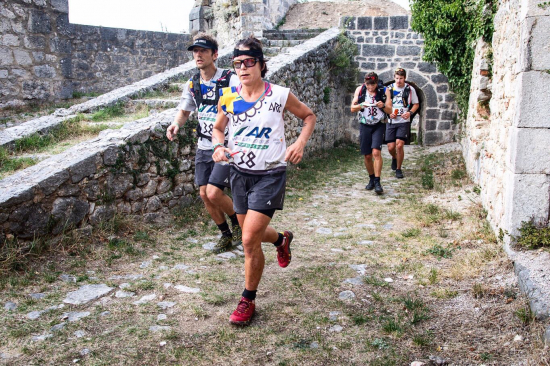 For sure, the organizers, and probably Swedish team USWE Adventure as well. The third day of ARC 2019 saw the 34 remaining teams ride Napoleon's road and trek among curious “anti gravity rocks” in the early morning. They visited the historic Knin fortress, did some orienteering on the spot and then went to the sensational Krka waterfalls. That would sound like a nice holiday if it weren't for the merciless tempo of the USWE Adventure Team.

Just when most who follow adventure racing thought that famous Czech team Black Hill Salomon would take over the race, the Swedes had other ideas. Obviously fast in the night time, USWE upped the tempo during the day as well. Still, entering Knin their lead was no more than 6 kilometers ahead of the chasers. Those behind, of course, had no plans to let them go. Raidsadventure.fr, Hoka One One and Black Hill Salomon were all still going strong before the last day of racing.

In the first minutes of Friday (accidentally the 13th) the closest chasers were the French team Raidsadventure.fr, some 40 minutes behind USWE Adventure. Those in the lead also had the good fortune to pass the tricky via ferrata along the river ÄŒikola canyon during the day. Steel cables are much scarier in the dark. Also, Krka waterfalls are much more beautiful in the sun but the fastest four teams were not likely to stop and enjoy the wonders of nature so close to the last stages of the race.

The best example of how fast these teams are going is the fact that there was a four hour gap between the first five teams and Team 400 in the sixth place at CP 50. Just to remind you, Team 400 is also sometimes known as Naturex, second in the ARWS world ranking. Not in their strongest line-up but still a super strong and experienced team. Just like Polish teams Adventure-trophy.pl and Gymcity who squeezed into top 10 and replaced strong Slovenians. Best of the three are now Pustolovec Rajd in 10th place. Somewhat surprisingly, the only local team Space Goats are still in the race in 26th spot, fighting to avoid the cut-off and finish full course of the race.

And the race is entering what could be crazy finish. Not many people expected the last leg to decide the whole podium but the last 14 kilometers of kayaking before finish in the Pine Beach Resort Pakoštane could be very dramatic. USWE Adventure leads but there are three French teams and one super strong Czech team right behind. 40 minutes in 500 kilometers race means nothnig.

USWE Packs ”Kick Ass” In WORLD SERIES Adventure Racing
“We went to Croatia to challenge both mind and body. Together we brought some new stuff to test, cause we knew, if it worked on a