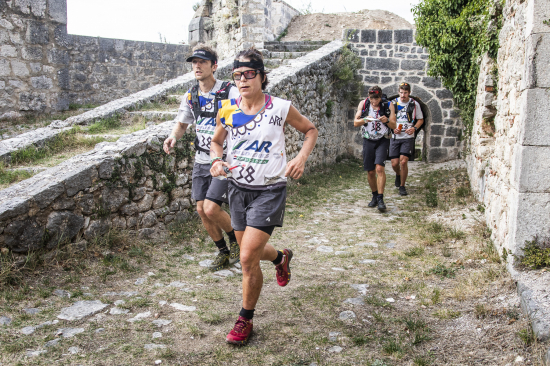 “We went to Croatia to challenge both mind and body. Together we brought some new stuff to test, cause we knew, if it worked on a non-stop adventure race, it will work for anything.“

When the team reached the finish line in Pakostane they had been racing non-stop for 73 hours with only 1.5hrs of sleep. USWE Adventure Team claimed 1st place in this grueling race, covering 17 legs of kayaking, running, mountain biking and climbing.  All with navigation using only map and compass.

The start of the race was at 9am the 10th of September and the last teams crossed the finish line Saturday the 14th at 4pm.  The start field line included 41 teams from 17 nationalities. The winner is rewarded with a free spot in the next Adventure Racing World Championships, which will be hosted in Paraguay in September 2020.

Jacob is also CEO of USWE Sports, a rapidly growing Swedish sports brand, and sees the opportunity to challenge the gear in adventure racing.

“I started at USWE less than 2 years ago. I brought my Adventure Racing mindset into the company, both gear knowledge and team management.  You have to believe in success to be able to reach it.  In an adventure race, believing in yourself and your team is the key. Not only when the wind is in your back, but all the way until you’ve finished.“

USWE is famous for their innovative hydration packs for mountainbiking, motosports and running. The company is growing rapidly and are preparing for a new range of products, including bigger packs for short hiking and travel.  The USWE Adventure Team tested a new prototype back pack during the race and it turned out a winner.

“Our main target group is not adventure racers, but … as a racer myself I know that if it’s perfect for Adventure Racing this means it will be amazing for any outdoor activities.”

The pack will be around 35L, lightweight, water proof, rip proof and adventure racing proven. The unique part of the pack is the harness system and the organizing pockets. The harness allows the user to carry the weight without too much pressure on the shoulders. The pockets and accessories will hold all the gear needed in an adventure race or a 1-2 day outdoor activity”

Adventure Race Croatia covered almost 500km divided into 130km running, 66km kayak and 303km of mountain biking.  The racing was close and competitive and soon got into a fight with 4 teams.  The two French teams “Hoka One One” and “Raidsaventure.fr – Absoluraid” as well as the “Black Hill Salomon” team from the Czech Republic.

USWE Adventure Team started without pushing too much and were convinced that patience would be the important factor in the end.

But on the first bike leg the problems were piling up.  This leg set the pace on the first night on forgotten gravel roads in the Zadar region.  All the bikes were geared up with tubeless tires, but one started to malfunction.

“The first flat was around 30 minutes into the leg. We tried to fix it with a boost of CO2 and went on, but it didn’t hold and we had to put a tube in. That’s two stops that you really don’t want to do when the racing is close. Then another wheel messed up the pace and the team were forced to stop yet another time to fix a tire.

“We felt that we were loosing both speed and momentum, but were at the same time convinced that if we just kept moving forward and kept patience it would get us into the game again”.

The first bike leg finished with a great downhill on gravel roads and of course, the 4th flat tire on the leg. Still the team were in reach of the leading pack after the first night and took the lead on the 2nd day.

“We managed to gain a 25min lead when reaching TA 6 (Transition Area 6). We got there just half an hour before sunset and decided to assemble the bikes and prepare for the next leg.  We also decided to use the shelter at the TA for 1.5h sleep. This would make us strong on the following stages during the 2nd night and it would also mean the other teams could clearly see that we were in the lead, sleeping and recovering.  I’m proud we had the guts to make this call. It turned out super successful and is one of the key decisions for the win”.

Once the team got on the bikes they caught the other teams.  Some were sleeping out on the leg and some tried to push through the night without sleeping.

The other key to success was the navigation throughout the course. Felix Breitschädel is an experienced World Championship participant in orienteering and guided the teams through the terrain both on and off the tracks. Without a top class navigator, you simply cannot win.

The third key moment happened at the Knin fortress close to the mountain Dinara. The teams stopped and resupplied both for the short sprint orienteering in the fortress as well as the two following legs.

“Our lead was only a few seconds when we got in to the TA, but we stayed for some minutes and the two French teams left directly. We started the push up the hill while eating and were surprised on top when we realized we hgadcaught the French teams. I saw Felix eyes started to spark and he said to me something like; "Why are we here?  We started with the ambition to win and now we have the opportunity. Shall we win or are we just here to finish the race?

I laid my arm around his shoulders and responded: “Team, lets push the speed up and win this race!”

After this moment USWE Adventure Team outsprinted the other teams at the fortress. The bikes were already prepped and they pedaled through a 41km bike leg in “no-time”. At the next TA the lead was around 30 mins and the gap increased. A 5km via ferrata climbing leg followed by 25km biking and the running leg of 18km running.

“We decided to push through the last night without any sleep. The first legs were OK, but we were a bit worried about the 55km mountain bike stage in the late hours of the night. It’s really hard to keep awake and keep the power up on the bike, but we managed the challenge by using a 4 min power nap.”

At the last TA the lead was around 1.5hours and the team could enjoy the final 14km kayak stage to the finish line at Pine Beach in Pakostane.

Who Saved The Best For Last?
For sure, the organizers, and probably Swedish team USWE Adventure as well. The third day of ARC 2019 saw the 34 remaining teams ride