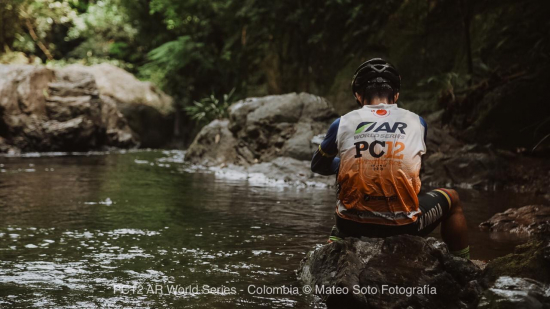 The PC12 Adventure Race in Colombia was the first of two new AR World Series Demonstration Races this year, and it proved to be a ground-breaking event on a tough course, raced in exceptionally hot conditions.

After several years of peace in Colombia it is now safe to visit much of the country again and the adventure racing community there wanted to welcome visitors and stage a race.  The organising team, lead by Ricky Velez, Lina Vargas and Juan Aristizabal, who all have ARWS racing experience around the world, chose the area known as "Magdalena Medio" because of its contrasting landscapes, and because it had been previously inaccessible as Velez explained.

“The Norcasia region was affected by violence until about 3 years ago.  Previously it was an area you couldn’t enter due to coca crops, illegal mining and armed groups. With the peace process many of these areas are now open to adventure tourism and in keeping with our principles, we wanted to go there.

“The town welcomed us with open arms and offered us so much support that we decided to change the route of the race to be around the town.”

For this first race the only visiting international team came from Ecuador, which was perhaps to be expected, though the race calendar did not help this year.  However, even for the Colombian teams the race area was new.  Most of the teams on the start line had some international racing behind them, with the two Saferbo-Seti teams the most experienced on the ARWS circuit.

The teams arrived in Norcasia for a course of 278km with 6 stages and 7515m of ascent, and Velez said, “Each stage had its magic.”  There was river rafting and a 14km tubing stage, plains full of wildlife including hippos, monkeys and macaw, jungle trails and steep hills, canyons and caves, and many waterfalls, with one checkpoint behind a curtain of water.

One thing the race did not have was a PC12 ... The name of the race comes from an incident in a race 3 years ago where PC12 was put out in the wrong place and none of the teams could find it.  After that it became a standing joke that if a team took a poor route or struggled with navigation they were “on PC12”.

To erase that bad memory the organisers took the title The PC12 Adventure Race and designed a race where an imaginary PC12 would be a dream checkpoint. They set all their race times to end in 12 minutes (so the start was at 09.12) and after PC11 came AT3 where the athletes had all of the food and drink they wanted, beds and chairs, and were “treated like kings”.

The teams were glad of the respite from the heat, and to be in or on the water whenever possible as the race was hit by record high temperatures. It was expected to be hot, but not for the temperatures to be in the high 30’s.  Jorge Mario Rodriguez, the captain and navigator of the winning team, ‘Saferbo Seti 1’ said, “On one long hike-a-bike uphill at midday our watches recorded 43°C!”

The teams and the race had to take great care to avoid heat stroke, and the original course was shortened for all the teams, and even then only the two Saferbo Seti teams recorded a full course finish.

Rodriguez was impressed with the course saying, “It was probably the most beautiful race I have ever been in, a wonderful area with a lot of biodiversity. There were so many animals and waterfalls and the course was very dynamic and never boring. It was a well presented race and every PC had its own difficulty and we felt it was of world class standard.”

His team did not have it easy to claim their win. “We managed to find some really difficult early PC’s and got a big lead over the other teams.” He said. “Then we had 2 people who got sick. First my wife got some heat stroke, so he had to stop to let her COOL down, then Juan Daniel got sick from vomiting and diarrhoea for the last 36 hours of the race.  It was unbelievable he was able to finish and that we still won.”

The team relied on their experience which includes races all over the world such as Huairasinchi, Ecomotion, Raid in France and most recently Expedition India.  They have a big squad with 3 teams and their tactic is to navigate well and rest 2 to 3 hours each day.  They also have one of the longest running sponsorships of any AR team from Saferbo (a transport company) and IT company SETI.

“They have been our sponsors for over 10 years,” added Rodriguez. “Two of the team work at SETI and we all have our own full time jobs.  (My wife has a marketing company and I am a reconstructive plastic surgeon.)  To have such great sponsors’ support us and help with race fees and transportation is something we are very, very grateful for.”

For the organisation Ricky Velez summed their experience and what lessons had been learned.

“We have been racing for more than 17 years at international races, visiting many countries and unusual places with wonderful people and learning a lot, but I never imagined planning a competition.  It's very hard but it's just as rewarding as racing.

“The organising team had moments of great stress but we knew how to handle them, with good planning prior to the competition and always keeping our spirits up.  We learned a lot and the team of volunteers responded superbly so the competitors could enjoy the race to the max whatever the situation.

“Planning and executing a first competition was hard but personally I think it will be harder to plan a second competition with unique landscapes as the second has to be much better than the first!

“We ended up very tired, but super animated for next time, and we are already thinking about possible scenarios.  All the volunteers want to continue and the comments made on social networks by competitors and sent to our emails show us that the work was well done. Our main sponsors have written and told us that for 2020 they want to be present giving us more support.

“For 2020 we would have to stage the race in April, in which case we will have to push ourselves even more if we want to make PC12 a dream come true next year.”

Seeking PC12 in Colombia
PC12 is one of the new ARWS Demonstration races and 12 teams set off this morning on a 300km course in the Antioquia region of Colombia.