(This is the first of a 6 part race report following the story of Team Uruguay Natural through Eco-Challenge; World's Toughest Race, as told by team captain Ruben Manduré.)

Eco Challenge marked for me many years ago the beginning of a new life, one which made me abandon other sporting passions to dedicate myself almost entirely to expeditionary racing. That is why, when I knew that it would be organized again, I told myself that I had to be there to share it with my current team mates.

The level of organization is the maximum we can aspire to in this sport. Every dollar invested (and there are millions of those) is used to create a unique atmosphere in which adventurers from all over the world are at ease. Nothing is missing, a huge infrastructure is deployed, we have different types of brand new boats waiting to be used for the first time by high performance teams or amateurs, who have similar dreams, and very different  forecasts.

In the days before the race, a luxury coastal resort in Navi finds us in full pre-race preparation, with old familiar faces from legends of this sport. Antonio de la Rosa and Guri Aznárez, for example, arrive with their respective teams of friends, with the aim of, based on their experience of a thousand battles, taking them to the finish line.  Mike Kloser comes with a team of top-level veterans, ready to put up a fight and a fancy assistant: Neil Jones, the guy who many years ago gave me navigation tips that are still useful today.

I look in another direction and find more friends from the world of adventure: the Summit team in full, with former world champions captained by the legendary Emma Roca and my friend Fran Costoya tuning the engine to fight at the top, or Travis Macy, who comes to try the feat of taking his Alzheimer's patient father to the finish line. I keep going through the hotel and I meet Urtzi Iglesias, who commands his team Vidaraid under the Brazilian flag.

Twenty years ago, when I watched Discovery Channel programs edited after each of these events, I dreamed of participating and identified with the suffering characters.  Perhaps today, when over the years I have become a competitor who has traveled the world through this sport, I see it with different eyes.  But I cannot forget that the essence of the program is basically to be an entertainment for the family rather than a technical story of the competition. The sooner we understand this, the better.

The Toughest Race is, on the one hand, a reality show of ordinary people facing a great challenge, which arouses interest in the masses who admire their willingness to do so, and, on the other hand, it is a fierce competition between the world's top teams to win an attractive prize and the prestige of placing themselves as high as possible in the final ranking.

The distances and the degree of difficulty of the route proposed by Kevin Hodder and Scott Flavelle are really brutal. Bear Grylls mentions it repeatedly to keep the audience informed, but for us it is not necessary, we know what we are getting into. 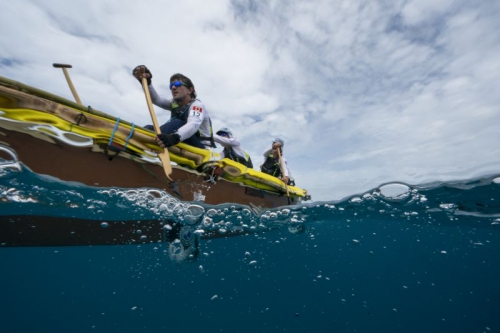 The first leg of the competition is a long paddle that starts on the Navuloa, a murky and almost draughtless river, which flows into the Pacific Ocean at Navitu a few kilometers after the start. We are drawn to be in one of the last starting positions on the bank, that is, the teams that are in the first positions start with a three or four-hundred-meter advantage.

As always happens in an expedition in which we want to position ourselves well, the first twenty-four hours are vital, then we have to resist.  So we go out rowing hard, trying to avoid teams that cannot move their boat fast, or are stranded, or turned around. In less than an hour, the whole picture is already clear and in perspective: we are in a top ten position and Team New Zealand pass us.  We try to take them as a reference and keep up their pace for about thirty minutes, but it is too ambitious and could lead to collapse. We stayed remarkably close to the powerful French team, so I see my friend Benjamin Midena's face concentrated on keeping a strong pace.

The wind does not appear, neither do the sails, so we must maintain constant speed with pure muscle, and in a temperature that increases as the sun rises in the clear sky.  We arrived at CP 1 on the island of Leleuvia about five or six minutes behind the leaders.

When the afternoon began to fall we arrived at Ovalau Island and anchored the Camakau to a branch not too close to the shore, because the tide there could cause a lot of time to be wasted if the boat is left in the dry.  Encouraged by the presence of Arancha Alamo, who surprises us with her presence, we make a decent transition, carry water, analyze the map, and leave by a consolidated path, in the heat.

It is not possible to maintain a continuous trot, Thiago Bonini Bagnolesi feels the rigour of the tough paddle and we have to slow our momentum, we even stop at a house where they offer us homemade water ice cream, a delicacy we cannot resist. The French move away from us, and then, before reaching the next PC we are overtaken by Tiki Tour, who, although affected by the heat, advance at a devastating speed with their super girl Jo Williams setting the pace.

After the CP we enter the jungle by a steep path that will take us to the next PC located at the highest point, with a steep slope in muddy terrain that makes it difficult to walk. We try to protect Thiago so that he can recover, so we take turns carrying his backpack, hydrating him, and adjusting the pace so as not to stop.  We reach the PC and as we descend the mountain the temperature starts to drop, Thiago recovers little by little and we can run again. After a while we arrive back at the Camakau, already in the dark.

While we make a quick transition, we see our compatriot team Chips Adventure, recently arrived from the first oceanic stretch and ready to start trekking. We offer them words of encouragement and set off back onto the water.

The next section takes us back to the island of Leleuvia, but to another part of its shore. Before marking the PC, we must find the first of the five medallions that we will have to collect during the tour. Thiago dives gladly in the transparent water and at the first attempt he comes out with the piece of metal between his teeth, which says "Ocean". We resume paddling towards the big island, Viti Levu, to the next transition.  On the way we leave behind a team that had an outstanding performance in the first paddling leg, it is Colombia, captained by the great runner Jorge Diego Llano, rival and friend of so many years.

We arrived near the coast about 4 hours later, but the last stretch is on foot with the water at our waists, where the Camakau will be tied up safe from the low tide. They fulfilled their task and although we never used the sail, it was good to have complete control of that boat in open water. We take a little longer in the transition, we are given new maps and we see the paddling continues. We have to inflate and prepare the SUP boards for a long stage of forty kilometers that promises to be hard, because at that time on the Natuvamatha Creek we are in the outgoing tide, so when we leave the bay and enter its course, it will be slow and laborious progress.

We paddle and paddle in absolute darkness, we stand on our boards, sometimes we lose sight of each other. Federica Frontini suffers in particular because she finds it hard to keep up, has not trained much in this discipline, and must make a major effort not to slow down the team.  She faces it with dignity and in silence.

At one point, after dawn, Thiago announces that he cannot keep his board in the right direction, something is wrong with the keel. We take some time to try variations then stop next to a bridge and we notice that the keel is no longer there. After trying to repair it without success we decided to continue, so we took turns to use the board without a keel and complete the section.

Somewhat slowly we finally reach the end of the section in the village of Sote. Just then, Vidaraid, who have been paddling at a strong pace with an ingenious double paddling system that optimizes their speed, catch up with us.  Next to me pass Camila Nicolau and Guilherme Pahl.  They are concentrated, as always in this top team, characterized by their determination.

We decided to eat hot food in the transition as we set up the bikes for a forty-kilometer bike ride on good roads. We leave a few minutes after Vidaraid and it starts raining slowly, it is a relief that the temperature drops and as the road is firm it does not hinder us.  We arrive without incident at Camp 1 in Naivucini Village, where the obligatory rest awaits us and also our dear assistant Lali Moratorio, who is delighted to see us.