When we arrive at the first Camp of the race in the late afternoon it is raining harder. I want to retire quickly to rest with the team, but there is news. The race is suspended until the early hours of the morning, because the rain has raised the level of the boxed-in stream that we must follow, and it is too dangerous.

We know that about five or six teams have already passed that short stretch and are heading for the next transition, another one is locked in the canyon and about eight teams will stay with us in the Naivucini Camp.  The rest could not get out of the previous transition. We will all be staying where we are now and Lali Moratorio is in full swing, takes care of us and passes tortillas to us.

The next day, at dawn, the rain stops.  Far from being reassured by the rest, we knew that this pause will cause strong teams to start up again at full speed.  And in this group we see several hares.  So, the trekking that takes us to the canyon is at the rhythm of a trail race. We run, we swim, we run, we climb walls, we swim again.  The navigation is easy because the trails always end up in the creek bed, crossing it again and again, so Thiago and I are relaxed. 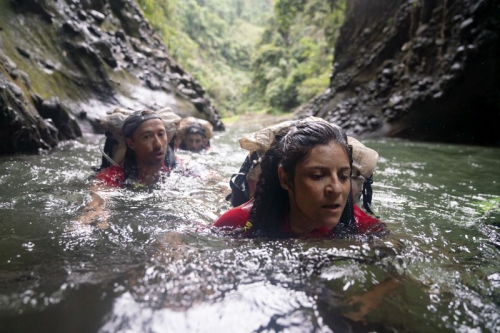 We go at a good pace in single file and I notice that after a curve we enter a dark area where the sun never comes directly because of the height of the walls, so I'm about to raise the alert for the change in the humidity of the rocks when I feel a blow and a strong exhalation right behind me. I turn around and see that Federica has fallen among the rocks. Gonza and Thiago arrive from behind to help her up.  She is a bit battered but fine and does not complain, and I hardly see a slight drag on her right knee, nothing to worry about.  For now.

After a bend in the river we find the CP and take the "Jungle" medallion. The navigation is a little confusing when we leave the canyon and follow the jungle paths, but we navigate well through that maze, choosing the right direction to reach the next transition. It is by the Wainimala River shore, where we find tied up bamboo canes, paracord rolls and many spectators eager to help build our two bili bili, the ancestral boat that serves as a means of transportation for the locals.

We let them build them, they do it well and fast, so we take to the water next to Team Atlas, Canadians reinforced by our longtime battle buddy Lars Bukkehave. We exchange positions with them during the whole long trip as we paddle with a couple of long poles down the river, with a slight current in our favor. It is slow and tiring; the speed is limited by the boat and there is nothing to do but be patient and very consistent. 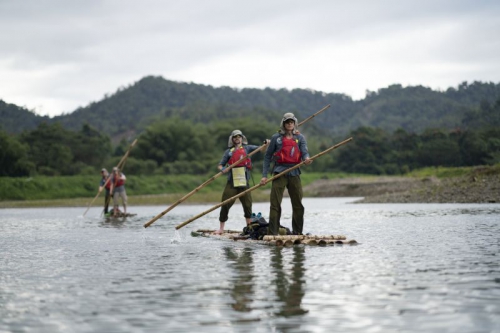 The Decision To Sleep

It's already getting dark as we arrive at the next transition, a small village with a school where we put the bikes together and ride for our second night, a long stretch along consolidated roads. The team is strong, with Federica radiating energy with every steep climb, so we set a good pace and devour the kilometers to reach the next camp, where we can burn another three hours of obligatory rest in addition to the ninety minutes for transition.

It was still early and we were tired, so we made a decision that we would regret later: to sleep the four and a half hours, to free ourselves from that burden and go out and pedal very hard before the rafting, which has a dark zone between 6:00 am and 6:00 pm. It was midnight.  If others chose to go out after only the 90-minute break, they would probably do a much slower ride than us, and then they would have to stop and pay for those hours later. Federica says she prefers to leave, to make sure we get to the rafting, but my arguments are good because there is plenty of time and we decided to stay.

At 6.20 a.m. we rode out very hard to do those 60 kilometers. We rode well and evenly without making any navigation mistakes, so at 11 in the morning we were at a crossroads 20 km from the transition. We took the right direction and, even though it is not raining anymore, the road changes. It’s no longer made of stone and compact earth; this stretch is just filled with a sticky clay mud that spreads like a blanket all over and around its edges. The martyrdom begins, shortly after we start we must get off our bikes that are swamped and progress at the pace of a sick animal. It’s hell.

We are moving so slowly that at 2.00 in the afternoon I begin to fear that our arrival before the dark zone is in danger, but we still do not give up. Gonzalo, with his tireless gregarious soul, keeps going back and forth helping to load bikes and clean them in every water hole we see, while I try to see on the map something that will help us get out of there faster.  Soon, our arrival at the point where we leave the bikes and continue on foot to the rafting is imminent, so he tried to cheer up the team by  crowning a particularly difficult climb. 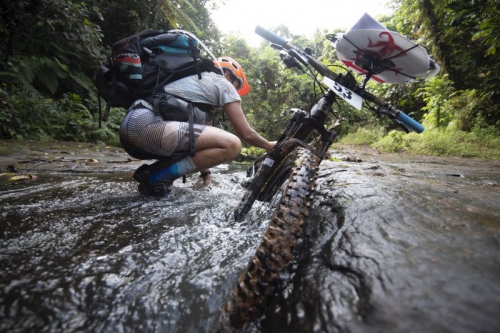 It is already 3.00 and we have time. At that time, we are caught up by Team Bones Adventure Racing, fighting like us with the mud. The powerful Mari Chandler is at the head of the team and as she approaches, she looks at me and says: "What the hell!”

Race For The Raft

We arrive almost together and the organization has mounted a compressor and some trestles so that we can wash the bikes before putting them in their boxes, because if we do not they won't ride again in the race.  We are washing in shifts with Bones when the PC manager approaches and with an innocent face tells us: the dark zone starts at 18:00, but if you don't start paddling by 16:00 you will have to stay on the shore until 6 am.

That was not in the roadbook, which said that if we started at 6pm we could get out of the dark zone, because the dangerous stretch of the river was at the beginning. The news produces in us the same reaction as a wasp sting. With our backpacks loaded we ran the 4 kilometers in less than 18 minutes, a feat at that stage of the race.  We arrived at exactly 3:55, so that's just enough time to take the raft, throw it down the steep slope and dive in, while we put on our life jackets and get into the right order for paddling. They tell us more about the previous news, at 18:00 we will have to stop on the riverbank wherever we are. It is bad news, but given the circumstances we feel grateful that we will be able to open up a 2 hour gap on our pursuers.

The Navua is a wonderful river, its canyon section takes speed with dizzying curves and some grade III rapids that make it fun. Thiago is a rafting expert and is at the helm. We go at full speed down the white water when an excess of confidence takes us by surprise, and we get stuck on a big rock. Federica behind and I in front fall out while Thiago and Gonzalo fight to get the flooded raft out of that critical position.

I climb up on a neighboring rock, somewhat beaten, and in one jump I climb onto the boat that shoots out when it gets back into the current.  Federica is floating downstream about 100 meters ahead, so we paddle hard to reach her before the next rapids. She is relaxed, in the correct defensive position avoiding obstacles and when we reach her she takes our hands and a second later she is already paddling normally. It is not until later we laugh nervoulsy about such a close shave. 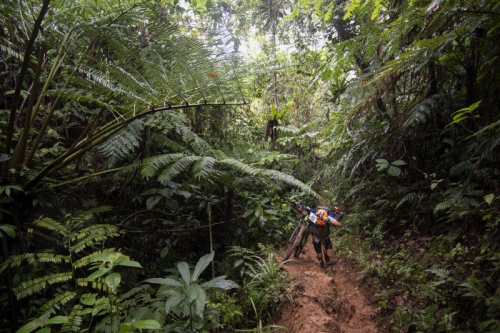 Around 18:00 we know we must stop, our satellite tracker gives away our movement, so we will have to get out of the river somewhere appropriate. It is not easy; the flow of water runs fast between high walls and we do not see a safe place to stop. In a moment, a big stone plain of about 30 meters offers us a good port, so we paddle hard to the left bank. When we stop, we see that the downstream end is already occupied by Bones, so we stay in the previous sector and work to set up a respectable camp to give us shelter at night. This is the best opportunity to set up the Tarp, an ingenious canvas with holes and ropes, which is deployed with trekking poles and forms a tent stable enough to stay dry for the third night of the race.

We light a fire with dry bamboo, eat something hot and get as much sleep as possible. But the magnitude of what just happened to us prevents me from sleeping. The decision to rest and burn mandatory hours in the camp was a mistake that will surely mean we cannot reach teams we had within range and now they are going to take 12 hours of advantage, and they are very good. I also think that before that we had already lost some time due to small mistakes or weaknesses, and that any delay causes a chain reaction. I lose consciousness as I think how to progress quickly at sunrise.