The Eagle Bay Epic Adventure Race soared to new heights on the weekend as 1,500 competitors spread their wings over one of three off-road adventure race events in south-west Western Australia.

The event attracted an additional 2,000-plus supporters, who cheered from the sidelines in beautiful weather conditions and gave the new race a big thumbs up!

“That was epic! The courses were epic, the event atmosphere was epic; the competitors and spectators lavished the spectacular setting; we couldn’t be happier!” said Event Director John Jacoby of Rapid Ascent.

Kristen Gadsdon, a previous four-time winner of the Augusta Adventure Race, was the mountain biker for the winning female team in the Leeuwin Long Course, saying that the event has given adventuring racing a reboot.

“There was an instant vibe as soon as you arrived!  Music was playing, people were buzzing. The course was brilliant and I can definitely see that it has given a lot of people a kick-start back into adventuring racing,” said Gadsdon. 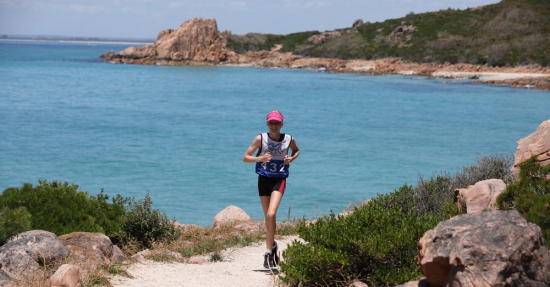 Byron Hudson and Phip Hughes showed up their nearest rivals, taking out the Leeuwin Long Course in times of 4hrs 09:07 and 5hrs 04:33, respectively, with Hudson only narrowly beating second place Brendon Dimmer by 20 seconds.

“I had no idea I was going as well as I did; I was just out there having a good time and it was only after I passed Brendan coming out of the swim that I backed myself,” said Hudson.

“I really enjoy running and that stretch of coastline is just magic! The course format was awesome too.” added Hudson.

The course was described by participants as the “best of the best” and included a gruelling 23km mountain bike, 2km ocean swim, 13.5km paddle, and 12.5km trail run traversing the breathtaking landscape along the coast. The run leg also included a water jump and 50m swim mid-way through.

Phip Hughes, who played catchup after her bike chain came off, was relieved to win the overall female category.

“Ben you’re a legend – that’s the guy who fixed my chain – it was such a relief to get back on the course; it was a great race all-round!” said Hughes.

In the relay team of four category, it was a tale of ‘blink and you’ll miss it’ with the speed and strength of ‘Team Epic’ who clocked in a time of 3hrs 56:47.

Team members included William Lee, Kristopher Taylor, Brendan Rice and Andrew Mowlem, who all raced individually as part of the Vibe Short Course on Saturday, backing up on Sunday with the Leeuwin Long Course team win. 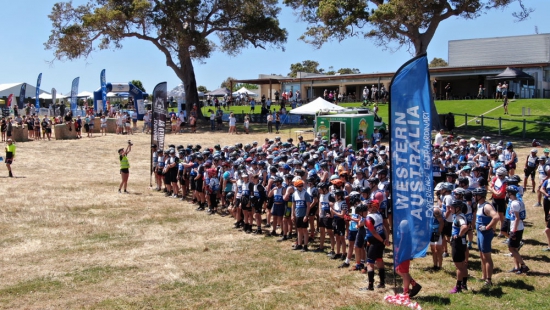 “The course was beautiful, especially the paddle leg, which was more tranquil than down in Augusta. We are usually just paddlers, but have always wanted to do it solo; so we gave yesterday a crack and are stoked to win the teams today,” said Lee.

The Vibe Short Course saw many newcomers, locals and social athletes tackle a 13km mountain bike, 1.2km ocean swim, 5km paddle and 7.9km trail run either solo or in relay teams. The shorter race being the most popular of the weekend with over 600 competitors.

Andrew Mowlem of ‘Team Epic’ (above) is setting up his trophy room nicely taking out the short course solo male line honours, along with under 18 rising star Femke Negus winning the female category; posting times of 2hrs 15:17 and 2hrs 33:07 respectively.

The Kids Adventure challenge on Saturday afternoon saw over 400 kids aged up to 13 years take on the most exciting 3.5km running and obstacle course of the year, complete with spiders' webs, hurdles, crawling and slippery dip obstacles along the way!

Couples had to piggy back one another over the 400m course that included hurdles and limbo bars, whilst the crowd cheered and clapped from the sidelines. Conducted in a head-to-head elimination style there were two heats of four pairs with a winner-takes-all final being the highlight of the weekend for many people.

It was great to see a large number of competitors and supporters as part of such a sensational  weekend, from adventure racing stalwarts and previous participants, as well as many locals, families, first-timers, and over 400 local primary school kids.

Further event information can be found at www.eaglebayepic.com.au.