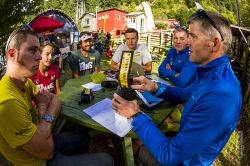 The next edition of the Godzone Adventure Race, based in Wanaka, filled up in record time recently.

For an expedition race that's very difficult to pull off so we asked Warren Bates, the race co-founder (and member of the adidas TERREX team) how this success came about.

As Warren is well known for his fearless opionions we discussed a few other issues on international adventure racing too ... and here's what he had to say.

How did GODZone come about?

GODZone is the lovechild of an over active imagination and boredom. I moved from London to Queenstown 4 years ago to break the corporate routine and enjoy more family time. New Zealand was a shock to the system. Not just the beauty and freedom but the amount of free time suddenly at my disposal.

Free time, in general, is a good thing. However, mix it in copious quantities with a personality like mine and you’re either going to get a hair-brained scheme or the mother of all midlife crises. I opted for the former and GODZone was born.

What do you think sets GODZone apart from other races?

New Zealand’s adventure racing history is without compare and we’re fortunate to leverage off that. Kiwi teams are extremely good which makes for competitive racing but, it is the strength and depth of youth and female talent here that sets GODZone apart.

This crop of Kiwi youngsters could dominate World AR for the next 20 years if motivated to do so. You have to admire the system and parents who have allowed this to happen against a global backdrop of increasing risk aversion.

On a more personal level I think the work that goes on behind the scenes, the attention to detail and professionalism is what separates us from other events. This is down to the quality of the organising team, of which I am just a small part. Perhaps my greatest strength as a Race Director is the clarity in which I see my own shortcomings and the knowledge that surrounding yourself with quality people is the way forward in any business. I’m very lucky to work with talented people who are fun to spend time with.

Is it difficult or helpful to keep racing at a high level while organising an international race?

Racing into my twilight years allows me to stay in touch with what is happening in the sport. You won’t be surprised to hear that racers and organisers see things from a very different perspective. Wearing both hats is enlightening but ultimately frustrating. When I see other organisers screw the basics up I want to scream “it’s not that bloody difficult”. By the same token when I hear racers complain I’ll often shake my head and mutter “…they haven’t got a clue.”

When we set up GODZone the team mantra was, ‘The best adventure race in the World’. Not the toughest; not the hardest, the most extreme, the longest, the wildest, etc. In my opinion you might as well say “the stupidest” or the “the one where you are most likely to have a crap experience and never come back”. It’s just media-inspired nonsense that resonates with the sort of people who have no idea of what extreme, wild, or real hardship is.

With this mantra in mind it’s crucial that we get the balance right when we consider the needs of the competitor versus what we can resource and deliver. As I’m still competing I tend to take the racers perspective. Everyone else on the team thinks in terms of what can be done on budget, without a hiccup, whilst maximising opportunities for media and host location. It promotes a healthy balance and is probably a key to our success to date.

What surprised you most on the organisational side?

How stressful it is. A concept that you are passionate about can leave you a bit misty eyed about all the positives at the beginning. Once that concept is close to delivery you start stressing over tiny decisions that seemed so simple many months ago. If you consider what GODZone constitutes this is hardly a revelation.

Send hundreds of people into the wilderness. Don’t tell them where they are going until just before they start. Purposely make the navigation challenging. Expect the teams to get by on minimal sleep. Throw in the vagaries of weather and hey presto, you unleash a beast that you simply can’t micro-manage. If you have a hint of the control freak about your personality, this inability to micro-manage leaves you in a tough place mentally for two weeks or more.

How do you see the future of expedition racing, GODZone and the World Series?

The future for expedition racing has to be shorter, more technical courses with much more professional organisation. Competitors want to be inspired, challenged and to have fun. Very few people these days have the time, inclination or desire to slog for 6-10 days. It’s boring, hard to resource and doesn’t work for the media. Events over the past 10 years have dumbed down risk and technical skills but increased distance to act as a counterweight to perceived difficulty. It’s been a poor trade-off for the paying customer and something we have reversed at GODZone.

I’d personally like to see less emphasis on the World Championships and only run the event every second or, perhaps, fourth year. Competitors and media are inspired by great events (Tour de France, Wimbledon, The Masters, Kona, etc) not World Championships.

We also need to address the issue that the World Championships is now solely the preserve of those countries that have access to large amounts of tourism dollar (3 Championships on the bounce in South/Central America) and not on the basis of who will actually deliver a world class event and bring those much needed North Americans and Europeans back into the sport.

Where do you stand on the issue of moving towards national teams for the World Series?

A good case was put forward in favour of national teams at the World Champs (and beyond) with pros and cons on both sides of the argument. However, removing the emotional fluff and flag waving we voted on the basis of what was best for GODZone and what our customers wanted – against and in the minority.

Perhaps the majority of ARWS directors were persuaded that national teams might entice TV major coverage, sponsorship and, ultimately, money back into the sport? We don’t think that’s likely and besides, those things are not important to our competitors. Who knows? It was never debated and we’ll go along with the decision.

GODZone 2015 is based at Lake Wanaka.  Why did you choose that location and what’s special about it?

We chose Lake Wanaka as it sits perfectly with our desire to deliver a truly world class event that excites and inspires everyone involved. From a hosting perspective it fits very well with an international airport just 45 minutes away. The town is big enough to get all you need but not so big that you lose touch with the amazing wilderness that surrounds you.

It’s also a pretty cool place to hang out and the locals are sport mad with many of the leading multisport athletes making it their home. I predict there will be hundreds if not thousands at the finish to see the leading and local teams in. One of the few genuinely enjoyable things about being a Race Director is the course design and recce process. The area around Wanaka is breath-taking, even by New Zealand standards, and I’ve loved what I’ve seen so far.

The teams are going to enjoy something very special.

For more information on Godzone visit http://godzoneadventure.com and to find out more about Wanaka see http://www.lakewanaka.co.nz/