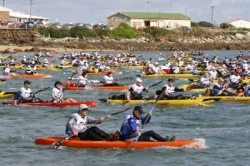 After the success of their first World Championship in Tasmania the AR World Series owners (Louise Foulkes and Craig Bycroft of Geocentric) might have been expected to take a break before the rigours of the year ahead, especially as the first ARWS races do not take place until late February.  Nothing could be further from the truth, they are busy planning the year ahead, working on global T.V. production plans and new races, and introducing improvements to the management of the Series.  So, what is going on behind the scenes and what can we expect to see from ARWS in 2012?

The first date for race followers to mark in their calendars is February 18th.  On that day the 2012 Series of Qualifiers kicks off with TWO South American races. These are Huairasinchi, which takes places in Ecuador from 18-21st February, and Tierra Viva, which takes place in Argentinean Patagonia from 18-26th February.

Ecuador offers visiting teams a unique cultural experience, varied terrain, and the added challenge of racing at high altitude and Race Director Santiago López told me a little more about this fascinating race.

"Huairasinchi, which in Kichwa language means 'the strength of the wind', was established in Ecuador in May 2003. At that time in Ecuador no other adventure race had ever been organized and the idea of running, biking, paddling and across steep terrain and using fixed ropes in teams of 4 was really exciting.

"For the first Huairasinchi 35 teams signed up, including three teams from the National Army, and one from the National Police department. The race was a complete success, with significant national press coverage, especially taking in consideration that football is the king of sports for most of the population!

"This year Huairasinchi will have its 10th edition with a very strong group of national teams that race every year to prove to themselves that they can finish. They are joined by a group of some of the top adventure athletes in the world.  Huairasinchi has been part of the Adventure Racing World Series ARWS since 2009 and has attracted many teams from every continent to one of the hardest races in the calendar.

"Huairasinchi always tests racers in very different terrains and altitudes, in a country that is characterized by its diversity of climates, vegetation and cultures.  In one Huairasinchi a team can cross a snow covered mountain pass over 4800 meters and finish the race paddling along a river at 100 meters in a tropical forest.  Ours is the shortest race of the ARWS calendar, but it is also the highest adventure race in the world, giving teams little room for error. It is no coincidence that 2 of the last World Champions have won Huairasinchi first (Buff Thermocool and Thule Adventure Team)."