Rules in Adventure Racing - An Exploration of Grey Areas 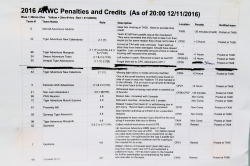 The AR World Series have just put out a new draft set of rules for consultation, based on a review of penalties and protests in 2016 and extensive discussion at the 2016 Athlete Forum, which took place after the last World Champs.

As an organisation ARWS have been working for many years to refine their series rules for expedition racing, and doing an admirable job – because it’s an almost impossible task!

Teams and race organisers have continued to throw them curved balls and complex situations to sort out over the last 18 months of racing, and this latest draft aims to learn from those experiences and avoid them recurring by providing a clear and concise set of rules.

There are a host of reasons why it’s hard to define rules for adventure racing, which I once only half-jokingly described as, “a sport where any number of people, can do anything, anywhere, for any length of time”.  It’s by nature an exploratory sport that pushes boundaries, and that underlying philosophy is hard to define and constrain.

Most sports have rules in the clear knowledge of what is going to happen, they are dealing with known contingencies. Adventure Racing, by its nature, throws up the unexpected and unpredictable, so rules have to cover unknown contingencies – which is hard to do!

That is especially so when expedition races themselves are all run by private companies, with their own way of doing things, and in many different countries, where  ideas on what adventure racing is might vary. And that’s before throwing in any confusion due to language problems.

Adventure racing has also always had a strong element of strategy and lateral thinking. Teams can choose different routes for a start, and they have to deal with equipment failures and variable weather etc. That freedom to adapt to any situation is an essential part of adventure racing. As a result of this teams have regarded ‘interpreting the rules’ as an AR skill in its own right … if there is an advantage to be gained within the rules they will take it!

And they can be very creative at doing this too.  One example from a winter race was a section where the planner clearly intended teams not to use a road, unfortunately the route book said, “do not ride along the road”.  One team read that … and pushed their bikes along the road rather than through deep snow off-road.

All of which makes the ARWS efforts to define a set of series rules all the more creditable – it just puts into context what they have to deal with!

Some discretion is written into the draft rules and this has to be there to allow scope for race organisers to plan without too much constraint. For example they can allow kayak sails at their race if they choose, though they are generally prohibited.

It is good to see the ‘100m rule’ being replaced by the more practical instruction the team should be ‘able to see and verbally communicate with each other’.  (I’ve never been at a race yet without seeing the 100m rule broken, though never with intent or danger to anyone.)

As you’d expect the Race Director has the final say on delivering the event, but the introduction of independent ARWS race judges allows for the rules and any disputes to be handled separately – which is a big step forward.  It’s also a task the Race Directors are happy to hand on! (They are still on any judging panel.)

The draft rules include a big section on support and assistance, mostly dealing with support which teams cannot legally have, and a chunk of this covers what media and supporters can and cannot do.

The increased number of media at races, the transparency of GPS tracking and much more immediate reporting has been one of the reasons there have been more disputes in recent years. (Or to put it another way, things which have probably ‘always gone on’ are now much more visible and public, so needed to be ruled on.)

Outside assistance is one area which is always going to cause issues and a personal opinion is that the draft rules don’t cover this sufficiently. They say teams can seek food/drink/medical help from retail businesses or the public but don’t deal with the issue of teams booking into accommodation on the course – which has happened many times in my experience and seems contrary to the spirit of adventure racing.

At the same time I’ve spoken to many teams who have been invited into family homes to sleep for a while and it has been one of the most memorable experiences in their race, but the new rules say all private property, even with owner’s permission, is out of bounds.  (It’s a perfect example of how hard it is to create rules for AR without limiting the experiences teams have on the course.)

Dark Zones have been a constant source of problems and are not mentioned anywhere, but the new rules do say the race clock does not stop, which should clear up the problems caused by time-outs on dark zones.

Another directive is that fires are not permitted, but you could argue fire lighting to keep warm is an outdoor skill, and teams caught in a dark zone should be able to light one while stopped. (This is one of those rules the Race Director can override however.)

Conduct is dealt with too, including directives not to cause disturbance or offence to the public on the course, but conveniently and completely overlooking the issue of teams stripping off in public. (When a very large school party walked past the first kayak to run transition area at the last World Champs some marshals were running around whispering, “no nudity, no nudity”.)

The way teams deal with rubbish is covered too, but simply telling teams to dispose of rubbish properly won’t stop them if they feel they won’t be caught (sad but true).  Maybe all teams should have to show their food wrappers at each TA before dropping them in a provided bin?

Enforcement of any rule is of course especially difficult on adventure racing courses covering huge areas and with limited staff and financial resources, and this is just one of many examples.

However, having the race judges on hand to oversee and supervise is a big improvement, and so is having some clearly set out rules, which the ARWS have provided for their series. Other races would do well to consider them for their own events.

You can download the draft rules at http://arworldseries.com/resources and comments are invited for another 7 days.