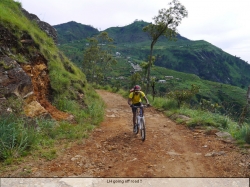 I first visited Sri Lanka way back in 2006 as a backpacking tourist, at which time, the country was recovering from the 2004 tsunami and

Shane James - Running to Live
In October 2012 I met Shane James whilst covering the Himalayan 100 Mile Stage Race. I wrote about him in my article “Ordinary People Doing Extraordinary Things”.  I clearly remember the

From ARWC 2013 to AR World Series Racing For 2014
Following an emotional and exceptional Adventure Racing World Championships in Costa Rica the AR World Rankings have been revised, and the world's greatest endurance athletes are already looking

Across the Equator and From the Amazon to the Andes

Sounds like a good plan for an AR World Championships doesn’t it?  At the minute it is only a plan as the course for Huairasinchi and

National Teams @ ARWC - Pandoras Box or Holy Grail?
Nathan Fa’avae’s open letter to the AR World Series appealing for a national teams policy at the AR World Champs has triggered a major change in the top tier of adventure racing. For the 2014

The Aces in the Expedition Adventure Racing Pack
No matter how you shuffle the cards the hand with the most aces is going to win, and it’s the same with expedition adventure racing teams. So far this year mixed teams of 4 from around the

ARWS - The Final 3 Rounds
Over the past couple of months in the AR World Series teams have had the chance to race in 3 more uniquely different environments, and those with the heart and stamina to push for the podium have

Reactive Lighting; The Intelligent Choice?
Using a head torch for outdoor sports and activities is taken for granted these days, so it’s easy to forget that the head torch was a revolutionary idea when first produced by Petzl in the

AR World Series Serves Up A Treat
In the past month the AR World Series has taken teams to North America and Europe for the first time in 2012 as part of a schedule which spans 5 continents in 11 races.  In races 6 and 7

Map Boards Special Feature
Pretty much the first thing on most peoples list as soon as they contemplate a map-based bike race is a map board. Teeth and pockets will both admittedly hold a map, but reading a map in one

Racing Away From the Competition on 3 Continents
At the beginning of April expedition adventure racing returned to its roots in New Zealand for the inaugural Orion Health Godzone Adventure Race, based in the adventure sports mecca of Queenstown.

2011 in Review
It's a new year! New races, challenges and adventures await, but before moving on here is my personal review of the highs and lows, and the trends in the year of adventure racing just gone by.