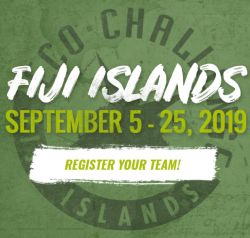 ‘Entries are open for Eco-Challenge’.  That’s not a line anyone in adventure racing expected to read again, not after the race abruptly disappeared 16 years ago.  Then earlier this year the announcement came from MGM TV (Mark Burnett) that the race was to be revived. The idea gained momentum with Bear Grylls presenting, and then Amazon Prime Video backing the project. It was really going to happen, and now it has.

Entries opened today and it was announced the race would be in ... Fiji. The race will pick up exactly where it left off in 2002.

A lot has changed in those years, in adventure racing, technology and television. Back then Eco-Challenge was one of the few pioneering races, now there are hundreds of races around the world and an established Adventure Racing World Series. There were no satellite trackers back in 2002 and Facebook hadn’t started so the whole dot-watching idea was a non-starter!  There was very little online reporting either, so you won’t find much online about the glory days of Eco-Challenge.

Reality TV was only just getting going as well and that was thanks to Mark Burnett and the Eco-Challenge documentaries. Eco-Challenge won him his first Emmy and he went on to become the powerful Hollywood mogul he is now, the king of reality TV shows.  And of course there was no Amazon TV either.

So we have a rebooted Eco-Challenge, stepping out of the past and bringing Adventure Racing to the masses once again, which can only be good for the sport (though the Race Directors of 3 ARWS events, two AR Euro series races, and the USARA nationals might prefer it had happened at another time of year).

What we know so far suggests they are sticking with what worked before, in some ways at least. Some of the crew are the same including the key figures in course designers Kevin Hodder and Scott Flavelle, and producer Lisa Hennessy.

The race goes back to having a support crew member for each team, something that has long been out of fashion in AR (though GODZone do have a supported category now). It makes sense in TV terms as another element to the storyline, but is something many established teams will have little or no experience of. Support crewing is a very specific skill in its own right and can make a big difference to teams and outcomes, so it’s going to give those who plan on entering something new to think about and work on.

The race is projected to be 400 miles and take 10-14 days to complete, so it’s very definitely an old-style expedition race. (It’s a US organised race started by a Brit ... so that’s nearly 650km to most of you.)  Given that Avaya won the recent World Champs on a brutal 460km course in just under 5 days, the going will have be very slow for the winners to take 10 days!  That is something else which has changed, there are many more ultra-organised, unflappable and superfast teams now. I don’t think they will stop for chats in transition either so maybe they’ll have TV time-outs!

Team make-up is the traditional mixed teams of 4 but there is a nationality rule so 3 of the team must be nationals or resident 5 years in the same country. Given the flexibility of the line-up in some teams, especially when late replacements are called in, that may give some teams problems. There will be a hot market for an experienced 4th racer too.

Another step back into the past, and a very welcome one for the elite teams, is that major prize money is back on the table.  It’s $100,000 US for the winners, $50,000 for second and $25,000 for third.  That kind of prize money hasn’t been on offer since the first Primal Quest, and the winners’ pot is twice what it was last time Eco-Challenge was in Fiji.

It’s a big incentive for the world’s elite teams, and Eco-Challenge will surely want the best there, so they can be assured of selection if they apply. The process is to apply before Jan 18th 2019, and part of that application is to upload a 5 to 10 minute team video to Youtube or Vimeo (though it need not be public). Eco-Challenge will then select the teams for the race.

It’s a TV show as well as a race after all and there are 10 episodes to produce. Teams will be tracking down anyone they know with video experience and wondering if they can get together to film?  Some live nowhere near each other or in different countries, though it’s not a requirement to film everyone together.  (The instructions don’t say the video has to be English either.)

One thing which has changed considerably is the entry fee, and it's proof prices do go down as well as up!  The entry fee in 2002 was $14,500 and some feared it would be as high again, but its been set at $5,000 which is realistic given the current price of other expedition races. (Also the teams are the stars of the show!)

In the coming months we’ll find out more about the new Eco-Challenge and their plans for the race, including who is taking part.  It’s going to ruffle a few feathers no doubt but it’s also sure to give Adventure Racing a publicity boost, which it sorely needs.  (Maybe all those obstacle course racers around the world will tune in and finally realise what true ‘Adventure Racing’ really is!)

You can read about the race and entry information at https://www.ecochallenge.com

Eco-Challenge Line Up Announced
Amazon has announced the lineup of teams from 30 countries that will be competing on “World’s Toughest Race: Eco-Challenge