Saddle Up for the 11th Annual Pisgah Stage Race 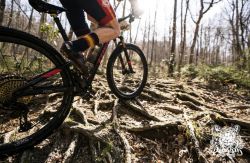 5 days, 140 miles and 20,000 feet of elevation gain. The 11 Annual Pisgah Stage Race, hosted in Pisgah National Forest April 8-13, 2019, is revered as the best and highest quality stage race in the world with consistent, gnarly singletrack on the docket every day. Pisgah has earned a growing reputation for having some of the best trails in the country featuring rhododendron tunnels, picturesque creek crossings, incredible leaf colors, and rooty, rocky singletrack.

Blue Ridge Adventures(BRA) is well-known for putting together premier endurance events including road rides, stage races and mountain biking races, and BRA rolls out the red carpet for the internationally attended Pisgah Stage Race. The week’s events include 5 days of racing, a recovery zone with snacks and recovery drinks at the race finish, Leaders’ Awards Ceremony and happy hour each evening with adult beverages, farm-to-table catered dinner six nights, continental breakfast and a closing ceremony celebration party. BRA even offers new on-site housing at the Brevard Music Center and full-on travel packages from the Asheville Airport for those interested in an all-inclusive epic mountain bike week.

“We are excited to move into our 11th edition of the PSR. New courses, lodging, meal upgrades and one of the most diverse group of racers to date slated to attend; this year’s event is going to be explosive!” Says BRA’s Founder and Race Director, Todd Branham.

As a leader in the trail building world, Branham’s creation of the Pisgah Stage Race course is always a thing of beauty. This year’s race features three new courses that travel through 76% singletrack, 19% dirt and only 5% asphalt riding. The course includes the East’s most rugged trails, including a daily enduro section, two of which will be new in 2019.Despite the multitude of singletrack, the Pisgah Stage Race is designed to be a true race, not a test of survival.

As one of three MTB stage races in America, The Pisgah Stage Race sets itself apart with daily enduro sections, that keep racers coming back year after year. PSR is already over 60% sold out. See you at the starting line!

Get a sneak peek here.

Pisgah has developed a growing and well-earned reputation for quality singletrack woven into the tallest and most rugged mountains this side of the Mississippi. Branham utilizes his experience as a professional trail builder in understanding the flow of the terrain to lay out courses that deliver a unique euphoric race experience.