Are You Hard Enough To Take On The Double Stalker? 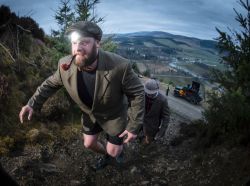 3000 hardy trail runners will be heading to Traquair House, Innerleithen, in the Scottish Borders, for The Mighty Deerstalker, the biggest and the toughest 'do it in Tweed' themed night run to be staged in the UK, when it returns in force on Saturday 16 March 2019 with The Double Stalker, a new character building two lap option (double distance, double obstacles and double 1824ft ascent!).

Having been forced to cancel the 2018 edition due to severe snow conditions, Rat Race Adventure Sports is delighted to announce that The Mighty Deerstalker, with its energy sapping natural and manmade obstacles and lung busting ascents, is back on their event calendar in 2019.

Jim Mee, MD of Rat Race Adventure Sports, said: “We’re thrilled to be back for 2019 after our hiatus caused by the unseasonably extreme weather of March 2018. With our biggest field ever, it is clear that the event is much loved and cherished. When we set out to create the legend of the ‘Stalker back in ‘06, we never thought it would become quite as legendary as it has. Long live the notorious Mighty Deerstalker!”

The Rat Race team set the fully waymarked route of this the most outlandish trail running event in the British calendar, whose true distance is a closely guarded secret.  They send tweed clad, head torch wearing runners off in eight separate timed waves to wade across freezing cold rivers, navigate through dense woodland, vault over straw bales, contend with gloopy super-suction mud covered banks, balance along log beams, scramble up a vertical scree slope and jog up and over a mountain or two, all in the pitch dark of a chilly March night.

This year Scotland’s original endurance adventure challenge, established in 2006, offers the Half Stalker (half distance), the Full Stalker (full distance) and the bonkers new Double Stalker; together with the equally infamous Mighty Beerstalker after party and the camping and glamping.

With this utterly exhilarating and audacious challenge in the rugged and evocative landscape of the Tweed Valley taking an average of 167 minutes to complete, runners need to be physically and mentally tough.  Yet none more so than those Bravehearts who have signed up to take on the new Double Deerstalker, a gruelling two laps of the Full Stalker course.  They will set off with their own special start wave at 15.30 in the afternoon, running lap one in the relative comfort of at least some daylight.   At the end of their wee warm up lap they will not re-enter the event village but instead access a dedicated snack and tea stop before heading out into the dark night of the Scottish wilderness for lap two and the most intense test of mental and physical character.

With 2018 entries automatically deferred to the 2019 event, organisers are looking forward to welcoming at least 3000 elite athletes, weekend warriors and first time have-a-go heroes, 50% of whom will travel to the Scottish Borders from outwith Scotland, to the start line, many of whom missed out on the fun and camaraderie of last year’s event.

Since 2015 Rat Race Adventure Sports have been partnered with Children with Cancer UK, the leading national children’s charity dedicated to the fight against childhood cancer -www.childrenwithcancer.org.uk. Rat Race have already raised £1 million for the charity and are looking to double that in the next three years.