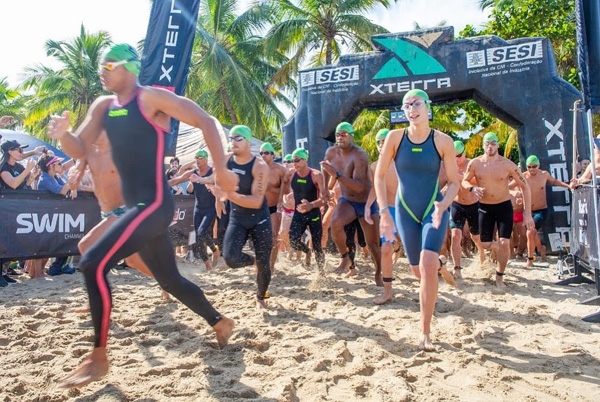 Sam Osborne and Samantha Kingsford from New Zealand captured the 15th annual XTERRA Brazil elite titles on the island of Ilhabela, on Saturday, May 11, 2019.

It's the ninth XTERRA World Tour win for Osborne in his career and his second in a row this season following his victory at XTERRA New Zealand in April. It's the second career major title for Kingsford, who won her first at XTERRA Albay last year.

In the men's race Osborne came out of the water in second place about 30-seconds behind Brazilian elite Marcus Fernandez, and just ahead of German road tri standout Sebastian Neef.  Once on the bike it was all Osborne, as he took the lead in the first K and never looked back. "Tried to settle into my rhythm as best I could on this course, which really has two parts.  The first half is more traditional but the second has some horrendously steep climbs," said Osborne.  "We had a fair bit of rain leading into race day which turned the technical parts into some proper hectic descents. It dried a bit & become much more playable on race day, but I spent a couple of nights dreaming about how to tackle them and managed to crack them. I knew there was a lot of time to be had if you could ride the technical sections well, and if it scared me a bit, it must have scared the others too."

Osborne posted the fastest bike split of the day (1:16:57) and survived the grueling run to take the tape in 2:19:54, just 40-seconds in front of three-time XTERRA Brazil Champ Felipe Moletta, who posted the fastest run split of the day in 39:26. "Heading into the run, I think it is famous how steep & long the first hill is," explained Osborne. "Splits were scarce, or maybe it was my lack of Portuguese, but I couldn't see anyone at the top of the climb so from there I just tried to run consistently, but safe. It is one of the few places were hitting the deck on the run could be more dire than the bike."

Osborne celebrated down the finish stretch alongside a huge local cheering section and added that, "the Brazilians have been incredibly hospitable, and I have enjoyed my time here. Also got to experience something new today watching the rolling traffic management up ahead as two motorbikes were in front of me clearing the roads, stopping traffic, and trying to keep the feral dogs away from us. They did an impressive job of keeping us safe during the race."

Moletta was solid in second, with Neef two minutes behind him in third, Diogo Malagon – the 2015 Brazil Champ – in fourth, and Marcus Fernandez in fifth.

In the women's elite race Kingsford dominated from start to finish, posting the fastest swim-bike-and-run splits on the day to take the tape in 2:53:57, more than five minutes ahead of XTERRA Chile Champion Valentina Carvalho in second. "Probably the hardest XTERRA course I have done, so I was happy to take the win at this race," exclaimed Kingsford.  "That course definitely made you work hard for every inch, which made the win feel even better."

Kingsford started so strong in the swim she was mixing it up with the elite men and by the time she got to the midway point and the notorious pier-jump to start the second-lap there were no other elite women in sight. "The jump off the famous pier mid-swim gave me a chance to have a glimpse back to see if any other women were with me but I couldn't see any, so I knew I was in a good spot."

Kingsford came out of the water with a two-minute lead and rolled from there, but the day wasn't without its anxiety. "I was a bit nervous about this bike course because it is a brutal course," she said. "It has a lot of tough, long, and steep climbs which take a lot out of you and then you get into some very technical descents that keep you on your toes."

Although she had a sizeable lead on the bike, Kingsford didn't know it so pushed hard the whole way. "It was hard not knowing how far back the second woman was from me. I was getting a few splits here and there but not enough to give me a clear idea as to what my lead was. I knew I just had to stick to my own rhythm and ride smart and safe."

The bike course in Ilhabela is full of flavor as it has a bit of everything, including a trip through the town and back streets, through the forest and into single track in the jungle. "I definitely enjoyed my time here in Brazil," said Kingsford. "The organizers and locals have been so welcoming and hospitable to us Kiwis, and we will definitely have to come back to this race again!"

Sabrina Gobbo came in third, putting an end to her five-year win streak (2014-2018) to an end. Laura Mira finished fourth and sits atop the Pan Am Tour elite women's standings after three events with 203 points, and Mirian Gomes rounded out the top five.