Lesotho. The Kingdom in the Sky 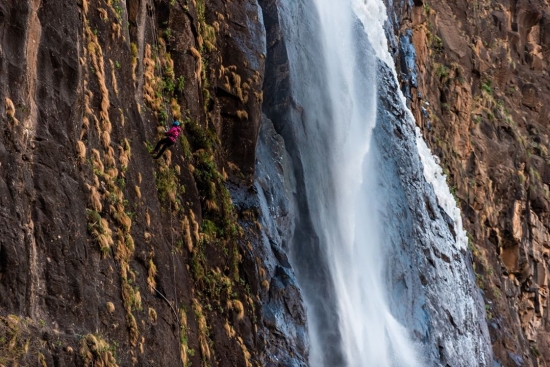 “We are returning to our roots - for us Africa has always been very special and there is no better place than Lesotho - The magnificent Kingdom in the Sky - located in the heart of Africa and filled with passionate people and magnificent landscapes. It’s going to be a very special race for all of us.”

In the footsteps of legends

Kinetic Events celebrates 10 years of adventure racing under the Expedition Africa banner by returning to the heart of Africa and aims to create a magical race in the Kingdom in the Sky - Lesotho. Exploring ancient tribal lands and early cattle tracks, the route promises to showcase the remnants of Jurassic grandeur and glacial forging and showcase the region’s unspoiled natural resources. To walk where kings and early herdsmen once walked - in the footsteps of legends.

“The course will challenge the teams and offer some “once in a lifetime” legs and disciplines, with some sections of the route having never been open to the public before. The logistics are also massive for this event and will really stretch the organisation and planning in the expansive rural environment,” explained Race co-director, Stephan Muller.

“We invite teams from all over the world who have been part of our journey to join us for this exciting race high in the mountains of Africa,” shared Heidi Muller, Race co-director.

Some of the world's best teams are expected to secure a place for this unique race and the competition for top honours will be fierce. The race will certainly offer world-class entertainment and will provide the perfect platform to showcase the athletes that form part of the Adventure Racing World Series (ARWS).

“We will have many of the top teams competing and this event will really highlight the sport of adventure racing that we love so much. It is going to be a tough couple of days for many teams but our hope and real focus is to create a race that people will remember for many years to come - that is why this race will be special for us,” said Heidi.

Lesotho is a democratic, sovereign and independent country with the unique characteristic of being totally surrounded by its neighbour, the Republic of South Africa. Formerly a British protectorate, it gained independence in 1966 and the Kingdom of Lesotho is one of the three remaining monarchies in Africa.

It has a land area of approximately 30 355 km², roughly the size of Belgium or Taiwan, or the American state of Maryland. Located at the southern tip of Africa, Lesotho is completely outside the tropics and enjoys a cool, temperate climate.

Often referred to as the “Switzerland of Africa”, it is blessed with a beautiful, often snow-capped range of mountains, the Maluti.

The Kingdom’s is centrally positioned in the heart of Africa’s most developed area, South Africa, and is well-served by air, rail and road links to all its major centres.

The culture of Lesotho is a blend of modern and traditional ways of living of the Sotho people.

Inhabitants of Lesotho are referred to in the plural as “Basotho” and in the singular as “Mosotho”. The people are predominantly Sotho in ethnicity. Lesotho means the land of the people who speak Sesotho.

The Basotho have developed a unique culture and traditional dress to suit their mountainous homeland. The cone-shaped Qiloane Mountain, which is one of the kingdom’s landmarks, is the prototype for the iconic ‘mokorotlo’ – the Basotho hat made of woven straw. In the rural areas, beautifully patterned woollen blankets ideally suited to the high-altitude climate are the regular form of daily dress for men (especially horsemen and herd boys) as well as many women.

The religion of the country is also a blend of traditional beliefs and modern systems such as Christianity and Islam. Even while embracing various religious beliefs, church services still feature traditional activities such as chanting and wearing of cultural attire.

The geology of Lesotho is built on ancient crystalline basement rock up to 3.6 billion years old and most are sedimentary or volcanic units, belonging to the Karoo Supergroup. A once-intense area of volcanic activity and igneous rock deposits during the Jurassic Epoch, the rock formations are contrasted by the intense erosion due to high rainfall and a rare case of southern African glaciation during the last ice age.

The result is a contrasting landscape of highlands, lowlands and foothills. Interestingly, Lesotho is the only independent state in the world that lies entirely above 1,000 metres (3,281 ft) in elevation. The highest point is the peak of the Thabana Ntlenyana mountain at 3,482 metres (11,424 ft) with over 80% of Lesotho above 1,800 metres (5,906 ft).

Lesotho is a land of great diversity and hope and Kinetic Events believes that by hosting Expedition Africa in the region, it will create a framework for local government departments, businesses and communities to be involved in the event.

The opportunity to highlight the amazing adventure options the region has to offer is a primary focus. To this extent, Kinetic Events has been working closely with the Lesotho Tourism Development Corporation (LTDC) to promote Lesotho as a major travel destination.

Head of Strategic Marketing, Tebello Thoola has been working alongside the Kinetic Team and is optimistic about hosting the event in the area in 2020.

“We are looking forward to seeing Lesotho get international exposure as a unique tourism destination. People will get to see the breathtaking landscapes and scenic beauty. They will have the opportunity to enjoy cultural experiences, the main tourist attractions and accommodation facilities. Our hope is that people from all corners of the world can learn about Lesotho, generate interest and ultimately visit Lesotho again,” said Thoola.

With the amazing support and partnership of the LTDC, the event is well-positioned to offer an exceptional experience for athletes, volunteers and supporters on an international stage.

The Kingdom of Lesotho is an adventure lover’s ultimate playground and the opportunity to explore and find adventure is endless.

The course will cover approximately 20% paddling, 30% trekking and 50% cycling and will include rope work and one or two special surprise activities.

The host venue and race village for Expedition Africa 2019 will be Afriski Mountain Resort, one of only two ski resorts in Southern Africa. Located at 3050m (10 006 ft) above sea-level, it is the second highest resort in Africa and boasts skiing opportunities all year round. International teams will be collected at OR Tambo International Airport and transported to and from the host venue.

Special packages will be added to the resort’s accommodation options for families and supporters. This will ensure they are close to the athletes and will have the chance to follow the route during the race.

Lesotho is also home to the second largest dam in Africa, the Katse Dam. A massive body of water covering 36km² with a holding capacity of 1520 million m³. The impressive 185m (606 ft) high dam wall has a unique double curvature arch design and is a key feature of the Lesotho Highlands Water Project.

The sheer volume and clarity of the water is spectacular and this will provide a unique paddling leg for the race.

The MTB and trekking legs will traverse far-reaching valleys and mountains and navigate teams through rugged National Parks. These include sections the Liphofung Nature Reserve, Tsehlanyane Nature Park and Bokong Nature Reserve. Another highlight will also include a section through the Maluti Drakensberg Park.

There will even be a leg that features a traditional donkey and Basotho pony as an added cultural experience.

The Kingdom in the Sky awaits

Expedition Africa 2020 is ready to showcase the magnificent Kingdom of Lesotho.

As part of the 10-year celebrations, teams will be invited to join in traditional ceremonies and customs, thus allowing them to fully immerse themselves in the unique culture of the area. The opportunity to engage with the people of Lesotho promises to be a very special part of the event.

A specially designed Expedition Africa 10 Year Celebration race garment is included for all competitors and the jacket will certainly be a reminder of the special event and memories of the celebrations.

The logistics and transportation of equipment for the event will be one of the largest undertakings in the history of Expedition Africa. As a result, a team of highly experienced crew and volunteers has been secured in order to ensure the success and efficiency of all systems and plans that is expected at an international event.

Coverage for the event will be provided by one of the best media crews in adventure racing. Kinetic Events is very fortunate to have partnered with Elevated Adventure Films and Adventure Life SA who will cover every aspect of the race. Viewers and supporters will be treated to a visual content display of epic proportions on a daily basis.

Regular “dot watchers” and fans of adventure racing will be able to track every kilometer of the remote course thanks to the satellite technology tracking capability of the GEN 3 SPOT tracking units. The SPOT trackers carried by each team and the tracking paths and information are expertly integrated into the comprehensive tracking system on www.kinetic-events.live.

The website will be live on 1 August 2019 and there will be a LIVE broadcast and Lesotho Video release on the 31 July 2019.

The Kinetic Events Team and Lesotho are ready to celebrate and look forward to sharing this incredible adventure with the world.

The Sky is truly the limit.

We look forward to greeting you soon.

“Welcome to the Kingdom in the Sky”

Event dates 9 April to 19 April 2020. For ALL the information about the event visit www.kinetic-events.co.za.