A Nail Biting Race To The Finish 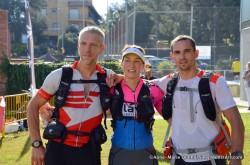 As the first three teams were racing to make the time cut-off at 19:00 on Saturday evening, teams further back were completing an urban orienteering section in the heart of the historical town of Girona. Fans of the immensely popular series “Game of Thrones “ will know that several scenes from season 7 were filmed on location here.

The town was heaving with tourists on the warm Saturday afternoon, children played in the sand in the city’s main square and a long queue weaved its way down a narrow sidewalk as clients waited patiently to purchase ice cream from the famous Rocambolesc Gelateria. Darting in and out of the swarms of tourists, racers collected CPs and headed out of town and up a hill overlooking the city.

The checkpoint here was at the top of a medieval fort with 360° views to the Mediterranean and nearby France.  It was hot and dusty and when we stopped to examine a cork tree, a viper slithered in front of us. As Raidaran-Trangoworld collected the CP, Xavi Rodriguez raised his arms to the sky and made an impassioned cry for an independent Catalonia.

Back at the Espace La Pineda sports complex in Sant Gregori, teams that had missed the cut-off were re-grouping and tracing the second set of maps (6-10) that they had been given. At each transition area, teams that had missed sections had to wait until the full course teams had exited and once again racers commented on how nice it was to be able to wait in a covered facility.

Section 6 was 25km of trekking, caving and canyoning. The cave was located high in the hills overlooking Girona, the skies were clear and the city lights sparkled in the distance as the three lead teams collected the CPs.

The next transition area was in the pool house of the sports center in Santa Cristina d’Aro. During the race briefing, the RD had told teams that there would be a café in this TA that would stay open all night so they should bring along some euros if they wanted to top up their food provisions.

Euskat Raid Team was the first full course team to reach this TA, around 01:30. Not only was the café open all night as promised, but the gentleman behind the counter was incredibly kind and cheerful. He patiently filled teams’ freeze dried meals with hot water and bore the chaos that only an AR transition area can manifest.

Transitioning from the 49km MTB section, teams embarked on a 25km trek and via ferrata. Discussing the via ferrata, Anna Movin of the Danish X team said afterwards, “We survived and afterwards I was like ‘wow, I did that’! The via ferrata was really technical and it was the first time that I’ve ever been scared. But it was also beautiful because we were there just as the sun was rising.”

Since missing the cut-off, teams further back in the field had been continually assessing which sections they could make and which they had to skip so not all did the trek and the via ferrata but for those who did the section during the night, it must have been quite an adventure if an experienced racer like Anna felt fear during the day.

Section 9 was 35km of mountain biking that lead teams back to the town in which the race had started: Caldes de Malavella. The top three full course teams started the section in the following order: 07:19 Euskal Raid, 07:28 Euskat Raid Team and 07:36 Black Hill Opava.NET. After the second night of racing, to have the lead teams still so close together, it was abundantly clear that it would be a competitive, nail-biting finish.

At 10:15 we saw these tope three teams at a CP outside of Caldes de Malavella, still racing incredibly close together. Maitane Garmendia of Euskal Raid spoke briefly about the last MTB section, saying in Spanish, “The night was difficult because there were no good paths and the CPs were placed in places that were difficult to see and the night complicated everything.”

Completing the last section back at the sports hall in Caldes de Malavella, the lead teams collected the final map, section 10; the rogaining section that would decide the race. Teams further back in the field who had skipped sections were also battling their way in, aiming to reach the 12:00 course closure. When Danish team X were asked if they wanted the regaining map, they exclaimed, “No rogaining, we’re too tired!”

It was a truly thrilling finish as the top 3 teams crossed the finish line within minutes of each other. They all shook hands, hugged and congratulated their competition on the race.

Because of the final rogaining section, none of the media knew which of the three teams were the winners, and neither did the teams. Then Carles Domingo Dilmer, the RD, quietly informed the Czech team Black Hill-Oopava.NET that they had won the race. It was a priceless AR moment; the expression of disbelief on their face as they computed the information!

During the prize giving I asked Tereza Rudolfovà about that moment and she explained their surprise saying, “Team #2 were always in front (ed. Euskat Raid Team) and we didn’t find the final CP on the trek. Since they were always in front, we were never actually racing for first place, not even trying to chase them, but the race went really well for us…”

That is the beauty of AR; it’s truly not over until you cross the finish line. As teams further back in the field analyzed the results, they realized that if they had skipped certain sections they would have been higher in the ranking but as the saying goes, hindsight is 20/20 vision.

Of the 19 teams that started the race, 14 completed it. Teams were able to hose down their bikes, shower and sort out their gear at the finish line. The prize giving ceremony was quick and efficient, followed by a mouth-watering paella that had been cooked on site.  With news of the raging forest fires in Portugal and the Galicia region of Spain, the return to reality was brutal for the two teams from Galicia as they embarked on the 12 hour drive home and our thoughts here at SleepMonsters are with them and their exquisite region.

The 2017 edition of the Aventura X-perience Expedition Race was well organized, suited for both highly competitive international teams and more inexperienced ones. The Catalan region of Spain, with easy access by air and by car, is an ideal terrain for adventure racing with the coast nearby as well as higher elevations.

SleepMonsters would like to thank all of the organizing team, and especially Carles Domingo Dilmer, Raul Comino and Ger Cuevas for their unwavering good humor and asistance in our race coverage. Special thanks also to Sergi Mir Miguel and Natalia Gonzalez Obizola of the tourism office in Caldes de Malavella for the walking tour of the ancient sites in their beautiful town prior to the race start.