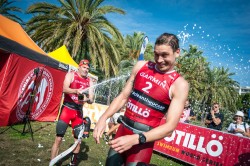 This first- ever ÖTILLÖ Cannes ended the 2018 ÖTILLÖ Swimrun World Series season on a perfect note. Almost no wind, sun and warm temperatures along with very fast racing at the front made for a perfect setting.

Team Garmin - George Bjälkemo & Pontus Lindberg (SWE) - The 2018 ÖTILLÖ World Seires Winners - managed to pull away in the end and to win the overall race in 04:36:59, 19 seconds ahead of Team Envol - Nicolas Remires & Julien Pousson (FRA)).

Team Garmin also claimed the title as winners of the 2018 ÖTILLÖ Swimrun World Series with a near perfect record of 5 wins this season.

The first women’s team - Team Envol - Desiree Andersson & Fanny Danckwardt (SWE) completed yet another impressive race and concluded their season with the title as the 2018 ÖTILLÖ Swimrun World Series winners. They finished after 05:14:50, 10:55 minutes ahead of Team Envol _ Anna Hellström & Susie Moonan (SWE).

“It has been a fantastic and a very hard day. We are very happy to be back on top after our hardest day of racing until date. All day has been at full tilt and a constant battle for the win.” said the very happy George Bjälkemo (SWE) after winning with Pontus Lindberg (SWE) Team Garmin.

This was the final stop of the 2018 ÖTILLÖ Swimrun World Series and the beautiful city of Cannes in the South of France set the stage for the finals of the World Series.

ÖTILLÖ prides itself in having unique races in unique places, Cannes really fits into this mold. It was the first time that ÖTILLÖ combines nature and an urban environment. The nature part of this course is magnificent with the start and beginning of the race being on and around both the Lerins Islands. With a long swim back to the mainland the racers then came back to an urban environment with the world famous Croisette, two big hills in the form of La Croix de Gardes and La Californie, the beautiful Suquet and the old town before finishing in the Square Verdun. The course was very much appreciated by the racers.

More than 500 racers from a total of 24 nations took part in this last ÖTILLÖ Swimrun weekend for 2018, the second qualifier for the 2019 ÖTILLÖ Swimrun World Championship in the Swedish archipelago. Next stop is in Hvar and the beginning of the 2019 season on April 6/7.

Water temperatures have been just over 20 degress and close to 27 degrees in the air. A perfect end to the season.

Several teams had to struggle to make it in time for the two cut offs. Some had to abandon along the way. The top teams pushed each other hard, chasing each other in a tight group all the way to the finish line. The level of competition has really exploded!

At all ÖTILLÖ swimrun World Series events teams race in pairs. Using each other’s strengths will push boundaries. The team experience is incomparable and is part of why swimrun is growing so fast in popularity.

The day prior to the race two shorter, more accessible race were organised, the ÖTILLÖ Sprint and ÖTILLÖ Experience, offering the same flavours as the longer, more challenging race but in a smaller format.