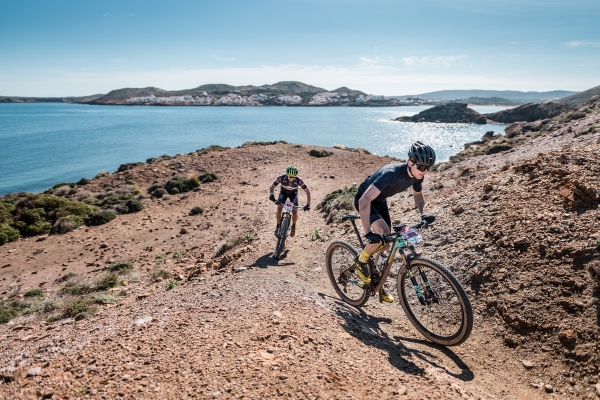 After a night of feasting at the race hotel buffet (and some energetic post-briefing dancing), 5:30 am quickly came around the next day. It was nearly time for the second - and toughest - stage of Camí De Cavalls. The infamous Queen Stage, we’d been forewarned about what was ahead - it wasn’t named ‘Mordor’ for nothing.

After a mountain of food for breakfast, with bellies full and bodies suitably caffeine fuelled, we took the bus to Cales Piques on the far north east of the Island. As the bus swung round to drop us off, we were welcomed by a brilliant blue sky merging with a calm, uninterrupted sea; a sharp contrast to the forthcoming assault on not just our body, but minds and senses!

Collecting our bikes, I made a last minute (and adverse decision) to pump up the tyres - finishing just in time to hear “585 y 586” called for kit check. Epic 360 brings riders and runners together with nature - aiming to leave no trace - and so strict checks were in place to ensure food wrappers were well-marked with rider numbers. An hour penalty would result for anyone careless with their rubbish.

Charging off the line at 8am, today was a fast start on tarmac road - riders spinning cranks furiously to get to the front before the rocky madness ensued. Our legs felt heavy, but we felt strong - vitamin D a welcome tonic to the dark winter we’d escaped from back at home.

It felt like an impossible feat though, fighting invisible lines and finding it hard to get a rhythm on the unyielding rocks. Our tyres were more than up to the task, but we were learning our first lesson - less is more when it comes to pressure on this wild, wind-blown terrain.

Unfortunately a snipper rock took Erin down, gouging out a sizeable chunk of her shin and shaking her up a little. From there we took it steady, looked up and out to the endless seascape - and played cat and mouse with the sharp end of the ultra running field. Having one of my closest and strongest friends beside me was all I needed to keep my head together and push through this grueling section.

As we made it to the first feed station, riders faces reflected our sentiments - don’t underestimate the relatively sedate gradient; this was a battle for every inch of our bodies and brains!

Taking air out of our tyres we rode off - the terrain transformed into dusty, dry and root covered forest track. We are back up and running - well, riding - and fast. As we sped up, grins grew wide as we moved through the playful twists and turns - this time runners moving to the side as we descended through a now lush green landscape.

The camaraderie was stand out - with cheers and the occasional supportive uphill push from runners - mirroring a mutual respect and admiration. Often, we’d comment “Full respect for running this!”, with replies back “We don’t know how you ride this!” - all the while smiling and suffering at the same time.

Reaching the coastline the flapping flags of the feed station marked the gateway to the feisty, fiery-red rocks and unforgiving earth that was ‘Mordor’ at around 30km. Mentally prepping whilst guzzling a mix of Spanish tortilla, pastries and a healthy dose of coffee and chocolate bars - we ventured on.

The next 10km had us heaving, hauling, pushing and scrambling up - and down - a series of relentless hills akin to the surface of Mars - with a ratcheting heat to match. A troop of teams came together with us - laughing and joking in a mix of Catalan and English about ‘type 2 fun’ - all the while lapping up the adventure that made the humdrum of desk life seem light years away.

As we hit the fire-track road, a sigh of relief came as our bums reunited with bike saddles and we pedaled at speed towards our next course marker at 44km.

Met by enthusiasm personified - any chance of feeling beaten dissolved with the cheery chat from the gate keeper! Spurred on by his infectious energy, we began the loop of fast flowing trail that skirted the very sides of the cliff edge near Cavalleria - halted only by a set of steps twice the height of our little legs! Hike-a-bike wasn’t quite over yet ...

Making it back to our friendly post guard, he marked our numbers and confirmed we’d competed the section. Now it was time to head for the cherished finish line. Flying down the track, I couldn’t help but think how similar it was to home as we looked around - cows munching on bright green grass; donkeys and dogs watching us from the side lines as we flew by on bikes.

Our speed was brought to a standstill by a set of small steps built into the wall. Groaning, I didn’t think my little arms could hack another bike haul. Thankfully my expression was met with a grin as one of the support team lifted our bikes over - a signal we’d made it to the official finish timing mat!

All that was left to do was spin out the legs for a short neutralised section to Es Mercadal - Erin and I chatting and cheering on the ‘Friends For Trails’ team - a super strong female duo tackling the ultra run.

Dropping into town, the towering El Toro was a familiar site as we rode our way to the line for the second time, followed by hugs and cheers - and more cake of course. Erin’s injury soon took priority - she’d dug deep but once the adrenaline wore off we made sure to get to the attentive medical tent just to be sure. A few stitches later, it was time to relax in the afternoon sun and recharge for the final stage.

The Third And Final Day
After the onslaught of the previous day, as the bus made its way to our final start line on day three of Camí De Cavalls, we were

Mountain Bike Endurance - Menorca Style!
Day One - 64 km - Cuitadella to Es Migjorn Gran My first memories of Menorca were as a small child in the early 90’s, where my