An International Mash Up At The Front And Still Anyone's Race 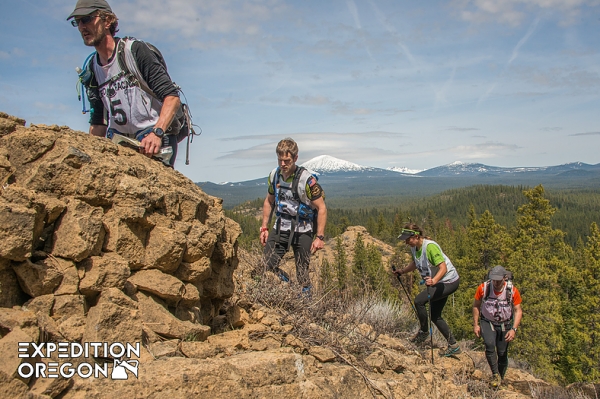 48 hours in to the race, there is a definitive pack jockeying for positions in the top 5.

After the fast start in the mountains, all of the top teams were expecting to beat the river dark zone, but then as the massive AOS Skincare Stage 2 unveiled itself, they switched expectations - realizing that they’d all get stuck in the dark zone.  Some even slowed down, imagining they’d basically all end up there with enough time to get 6 hours of sleep …

But here is the thing with AR.

The “fast” estimated times we give racers for the stages are based on daylight and a vetting team of athletes who have a full night sleep.  Despite communicating this to them at pre-race, most teams (including my own when I race), fail to accept that it is hard to continually meet those times during night travel and with sleep deprivation.

Top teams ranged from 3:15 to 4 hours on the Nite Ize Stage 3 orienteering course depending on their route, which was in line with the expected 3-6 hours. But they did it all during broad daylight.

As they entered AOS Skincare Stage 4, we heard many comments about “no reason to push too hard.” Many teams must have imagined a fun 10-hour mix of pavement, forest road, and miles of Bend’s world famous single-track.

Instead, as night fell, teams' pace slowed even more as the 36 hours of racing took its toll and navigators made small mistakes over and over again trying to pick the best route through the high desert trails.

Lars Bukkehave of #1 Team Leki/Bend Racing Canada even admitted, "This is the worst I’ve navigated in 10 years. We are micro-navigating everything and second guessing." Which is really showing in their struggle with finding check points that aren’t hard to find and that less experienced teams are easily finding.

CP22 was especially challenging at night with a short hike-a-bike taking racers back above snow line for a short distance.

#2 Quest AR struggled here, nearly being caught by the Swedes and French.  It must have lit a fire under them though when they crossed paths with the tall Scandinavians.

# 2 Quest powered through the last 25 miles of epic bike trails to roll into TA4 before 1AM; enough time for a decent 4 hours of sleep.  The French of #12 Alpha-Dental arrived a 2AM, so they also got a recharge.

The final 3 of the top 5 (Sweden #9 Naturkompaniet Pioneers, USA #3 Bones AR, and Canada #1 Leki/Bend Racing Canada) all fell apart to some degree in the early morning hours, arriving just before 4 AM. Not much sleep for any of them. Maybe an hour.

Interesting to note that the Swedes took the lead at CP22 for a moment and then lost 3.5 hours to Quest before TA4.  Quest took 3.5 hours to ride it and the Swedes 7 hours, being caught and passed by both Bones and BendRacing/Leki.

This AM, Bend Racing was first on the water for the 30-mile Alpacka Raft Stage-- impressive, but the craziness in their eyes hinted that they wouldn’t hold it for long.

Day 3 will be a big day with a mix of technical whitewater and easier 10-mile trek and bike in prAna Stage 6 before they arrive at the last orienteering and climbing stage, the Henderson Flat Stage 7.

Bringing up the rear is the local team “Around the Bend” who is forging ahead only getting the mandatory points. We are very impressed that they are still racing at this point and rooting for them to keep it up, as they’ve already exceed the length of their longest ever race by 40 hours!

The most amazing fact? We are 48 hours into one of the most technically difficult and demanding endurance events in the world and no teams have dropped out.