ITERA Attracts An International Entry To The Scottish Highlands 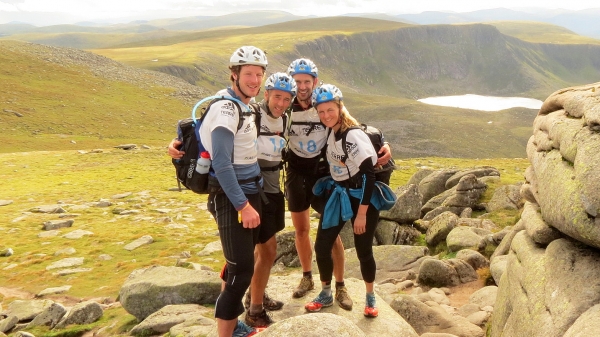 Organising and marketing an expedition adventure race requires imagination and skill, a willingness to take risks, and faith in your ability to put the right package together to attract enough teams.

It’s a blend Open Adventure have been working on for over a decade, and the entry for the ITERA Expedition in the Highlands of Scotland this August shows they’ve got the right mix of ingredients to attract teams of all abilities and from all around the world.

Entries are still open but at the moment there are 36 teams on the start list which has 10 different national flags alongside the entries.  Teams are travelling from the USA and Canada, from South Africa, and from 6 European countries, and will gather for the race start in Inverness on August 10th.  (As they don’t know the course there is a lot of faith on their part too. They are travelling a long way to find out what the signed up for just before the start!)

One of the many attractions of the race is that it’s part of the Adventure Racing World Series and teams who finish earn World Series ranking points.  International teams enter knowing the race organisation meets a high standard and the elite teams know the course will be challenging enough for their standard, and that the competition will be intense. The race follows a standard set of international rules and the ARWS provide independent referees to oversee the competition.

Holding the race in the Scottish Highlands is a huge draw too, both for teams from the UK and abroad.  There has not been a big expedition race in Scotland since Open Adventure organised the ‘Sting in Stirling’ in 2012 and with a 600km route starting in Inverness the scope to explore the mountains, lochs and coastline of the Highlands is huge.

It’s a unique chance to explore one of Europe’s great wilderness areas which the teams are keen to take, for a variety of reasons!

“The Scottish highlands are a wild and beautiful place and we all want to experience more of it. We know we are going to the perfect location for an epic adventure that Paul, Tom, James and the team are sure to deliver.  The anticipation and excitement are already growing.” - Team Lochland Runner.

“When I was a wee child, I watched this film called Braveheart and since that moment Scotland has been on my list to travel ...  One quiet day in the office an email came through announcing ITERA would take place in Scotland ... I jumped out of my office chair and yelled "FREEEEEEDOM!" – Team Adventure Life (RSA)

“Our team is excited about coming out to explore the Scottish highlands! How cool is that?!” – Team Lost but Making Record Time (CAN)

It is always a good sign to see teams return to race again, and the entry list has a lot of familiar team names from past races. (This despite the last ITERA in Ireland being hit with some really, really awful weather!)

Jan Rogers of Team McSeamus Clan commented, “ITERA Ireland Best Holiday Ever! Perhaps it was a little wet and occasionally windy and the scenery would have been stunning if we could have seen it. But, we were entertained 24/7 for 5 days, we met so many lovely people along the way and had an amazing journey.

“Our expectations of Scotland are that we will go places we have never been before and we will do stuff we have never done before, the sun will be shining and there will be no midges – we are due a bit of good luck on an expedition race!”

Team FMR, the defending title holders from the race in Ireland are back, and are one of 6 French teams taking part. Also returning (for a third ITERA) are SWECO of Sweden, The Lowland Leopards from the Netherlands, and a very long list of UK teams who are regulars at Open Adventure races.

One of these teams is Nav4 – JRP, lead by Joe Faulkner.

“I can’t think of a better landscape to journey through than Scotland and in particular, Northern Scotland.  Inverness will serve as an excellent base from which to enjoy our adventure journey.

“NAV4 have had a team (or two!) at each of the UK based expedition races for the past decade or so, and have raced three previous Scottish Expedition AR races.”

There are quite a few race organisers taking part among the teams as well. Team BudiñoRAID are from a Spanish adventure race, as are the Liger Raid team from France.  From the UK there is an OMM team lead by Stuart Hamilton, the organiser of the Original Mountain Marathon, which is one of the biggest UK outdoor events.

“The motivation for doing the ITERA is getting out of our comfort zones, the sense of challenge, adversity and achievement that is consequently associated with it.  We chose ITERA as we wanted to do the race in Scotland rather than another country and all of us are hoping that we learn more about ourselves, have fun (albeit possibly after the race) and take part in an event as a competitor rather than an organiser.”

The organiser’s reputation is another reason many teams have given for signing up, and for returning to race with them again.  Attention to detail is something Open Adventure are known for and also delivering a course that is both challenging for the elite and accessible for slower teams.

French team Lozère Team2Raid are one of the teams who will aim to be at the front of the pack and team Captain Nicolas Rambier said, “We expect to live an authentic wild race, technical in all aspects, we also hope to show a good race to all our supporters in France on live-tracking websites.” (The satellite tracking will be run by partner company Open Tracking, who are the biggest and most experienced company in the world at tracking adventure races.)

Most teams have expressed an expectation to get around the full course and over the finish line, and as ITERA’s have a very high finish rate compared to most expedition races the chances are they will, but only after a memorable Highland adventure.

You can see the full team list for ITERA at https://www.itera.co.uk/race-details/team-list/

You can find out more about the race at https://www.itera.co.uk/

Notes To Assist Rehabilitation Of Multi-Day Adventure Racers
Now that you’ve survived several days racing in the wilderness, these handy tips from Eddie Winthorpe of the Nav4-JRP Team may

SWECO Take Second as ITERA Wraps Up
Through day 5 of ITERA teams were arriving in Inverness city centre, riding in past the castle to the finish line in the plaza outside the

Lozere Team2raid Take The Win At ITERA
On the final morning of ITERA, and going into the fifth day, three teams were still on the full course for the race.  SWECO had lead

From Glen Garry to The Great Glen
Teams at ITERA were paddling and rafting down Glen Garry on the afternoon and evening of day 4 of the race.  The race had adapted the

Out to Applecross
The full course teams in ITERA, and those short course teams who had the energy, followed the route out to the remote village of Applecross

At Kinlochewe
Teams are descending from their Fisherfield traverse into the village of Kinlochewe to the transition in the village hall, which is packed

Hit by a Headwind
Last night’s course change and today’s headwind have hit the teams and the race organisation hard, and it’s been a tough

Oh la la! Portage!
Stage 4 of ITERA is proving to be a huge test of endurance for the teams and some of the French teams I met portaging their kayaks along

Elphin Safety Check Means a Course Change
Teams finished their coast to coast ride near Ledmore Junction in a small village hall at Elphin, although there did not seem to be a

Horrible History in Strath Rory
Scotland does history very well, it has lots of it, in all varieties, and on the first day of the race teams have been passing through

Off With A Bang At Dunrobin Castle
With a blast from a shotgun ITERA started at 08.30 this morning in front of the baroque turrets of Dunrobin Castle, seat of the Duke of

The Rush For The School Gates As ITERA Gets Ready To Go
The Milburn Academy was a hive of activity today as teams made final preparations for the race, and they were on deadline.  The school

Two New (ish) Teams For ITERA
Adventure racing teams are more flexible than most sports teams, and two teams at ITERA have brought together racers who didn’t

The ITERA Course Is Revealed!
The curtain slowly rose before the expectant teams at the ITERA Expedition Race briefing, and the race route was revealed.  A huge