Hitting The Heights On Day 4 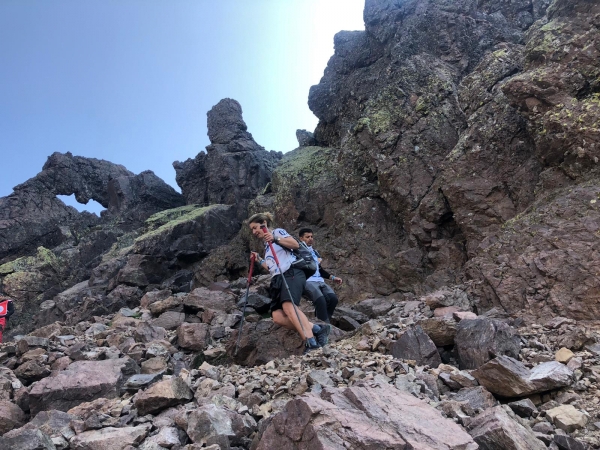 At 6:00, the check point of neutralization reopened after an exhausting night. It is above the highest village in Corsica, Calasima, that eco-adventurers have set off to flirt with the highest peaks of the Corsican mountain.

The competitors start on a trail to join the famous GR20. From there, it's a real mountain race that starts, 1400 meters of altitude to reach the summit of the most beautiful Corsican mountains, the Paglia Orba. The competitors are very lucky to walk in the snow looking at the sea ... which other territory in the world can offer such magical moments? And just under the summit, the organizers have installed a rappelling of 50 meters on the granitic walls of the mythical Paglia Orba! As a competitor told us "I am exhausted but what happiness, to go down the Paglia Orba as a reminder, but what luck! "

We must now remain vigilant and join the Col de Verghju. And it is on a beautiful trail that the raiders penetrate the magnificent territory of Evisa. From the Col de Vergio crews discover a multi-secular pine forest laricci to join the Aitone assistance point in Evisa.

A first course of Mountain Bike allows eco-adventurers to discover a natural setting between the high mountains traveled this morning and the extraordinary Gulf of Porto that can already be seen and will be the scene of the next day's stage.

The sequence of a second mountain bike event allows the more adventurous to have a great time. The organization has indeed rehabilitate during winter and spring a mountain bike route as demanding as it sends. This single track while demanding a flawless dexterity is also an ode to the discovery of the Evisa trails. The route joins indeed the path of discovery of the chestnut.

And these landscapes will remain etched in the minds of competitors who understand why for more than 25 years, the Corsica Raid Adventure is a legendary and unique race.

The arrival was at the heart of the village of Evisa where again, the town hall and the inhabitants have prepared an exceptional welcome to teams from around the world and thanks to the Corsica Raid, have discovered the Corsican friendliness.

Racing Day and Night - The Long Stage
The competitors left the coast for two days and one night of mountain racing. Corsica is a real mountain in the sea and the competitors

Experiencing Corsica's Delights on Day One
Let's go! This morning at 9 am, the 36 teams have set off in the heart of Saint Florent for a new edition of the Corsica Raid Aventure.

Gathering On 'The Isle of Beauty'
The Corsica Raid Aventure started under the sun today at Campsite San Damiano in Biguglia, south of Bastia. The organizers were ready to