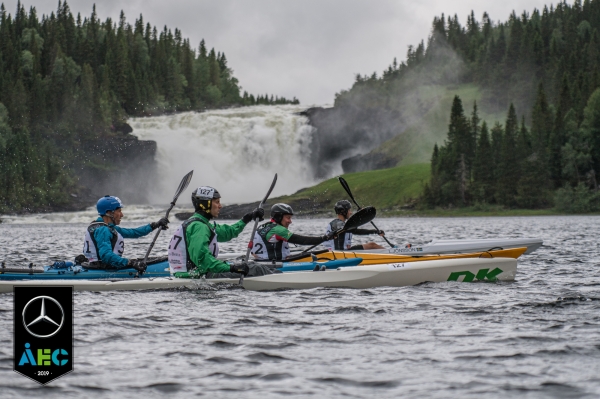 ÅEC race organization decided in the early morning hours of Friday to cancel both the Lake Class paddling and the 1,000 meter vertical run over the peak due to low visibility and wind gusts of up to 30 m/s. The run course relied on the “bad weather alternative” for the first time in 23 years.

“The lake is too exposed,” said Scott Cole, one of the race directors along with Henrik Weile and Martin Rask.  “We felt that the river was not only more protected, but also safer given that River Class competitors had proved their skills through pre-race certifications. Many swam in the rapids anyway, but they knew how to handle the conditions.”

The 500+ competitors did not seem bothered by the weather-shortened course.  The decision seemed warranted on Saturday morning when large whitecaps were ripping down the valley on the lake.   Nicolas Mougin from France appreciated the decision: “Congratulations and respect to the race organization’s focus on sports values and safety.”  Indeed, the extreme weather created a unique bond among competitors, with plenty of stories blowing around the buffet dinner on Saturday night: the favorite was about the runners that reported “leaning in” to the wind with their full body weight without falling over!

Emil Dahlqvist from Sweden took home the 1,000 Euro prize money for the River Class for the second time, beating a strong field of previous winners, as well as top New Zealand multisport racer Sam Manson. Jari Palonen was the fourth River Class racer to cross the finish, but had to stop for 60 seconds for the passing train after the first transition.  Race officials adjusted his final race time to account for this unexpected stop and he was bumped up to the podium, pushing New Zealander Sam Manson to fourth place by only 15 seconds.

“I am definitely coming back” says Sam. “There aren't many multisport races with whitewater kayak stages, so I will certainly be passing the word on back home.”

Marie Nilsson won a tight women’s race, where the top three finishers were within 5 minutes of each other after 6 hours of racing. It was Marie’s first victory and she beat out two previous winners Malin Hjalmarsson and Marika Wagner.

For Australian Robbie Savage, the race ended just a few km from the finish, as race staff pulled him off the course when it was obvious that he wasn’t cycling or thinking straight.  “Sadly 2019 didn’t turn out well but it was an amazing course - a real multisporter’s race. The people who participate and support the race are truly incredible; I enjoyed the hospitality and warmth of the people in Are. I’ll be back to give it another go!”

Six competitors came from France, having won a unique social media competition sponsored by Mercedes Benz. These three DUO teams brought along a film crew and created quite a bond among themselves. Luckily, one of the teams was made up of two whitewater paddling guides, so they moved over to race solo in River Clas when they saw that the Lake Class paddling was cancelled. “I loved this race with its atmosphere and sincerity” says Nicolas Mougin. “Thank you for allowing us to live this wonderful adventure!”

The new “Run N Bike” race class was introduced in 2019, which attracted 80+ competitors. The result was, however, somewhat ironic as everyone except River Class was forced into a two-sport race.

On Thursday before the race over a 100 participants joined the Lundstams Kidz Event at Copperhill Mountain Lodge, a course involving running, biking, and rope adventure for youngster aged 4 to 14.   “This was cool, I want to find another race like this,” said Thor Lindnord.

”It turned out well, despite many last minute course changes. Our team of 80 volunteers worked around the clock,” says Henrik Weile.  “Now it’s time for all of us to have a long sleep.”