Racing to Remember the Raid Gauloises 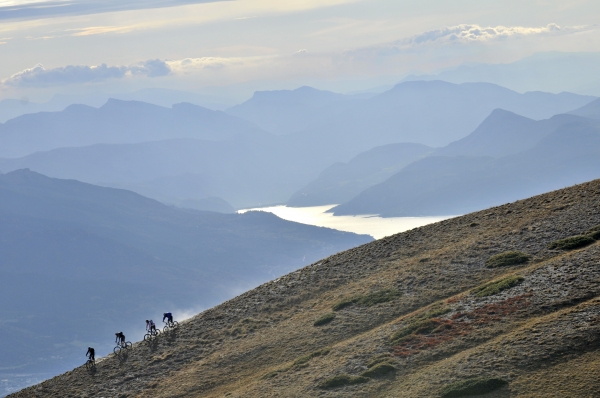 I seriously doubt that any racer during an expedition length race has not at least once wondered how in the hell they got themselves into this mess and what in the world are they doing at the other end of the world, with three other smelly creatures that might pass as humans, experiencing the prolonged ecstasy and agony that only adventure racing can deliver.

You have a Frenchman, Gerard Fusil, to thank, or curse, depending on whether you’re reading this from the comfort of your sofa or chasing sleepmonsters out in the wilds.

In 1987 Monsieur Fusil had the idea of creating an adventure that combined sporting disciplines, travel and contact with other cultures, as a team sport.  (The genesis of the initial seed that grew into modern adventure racing will be the subject of another article to follow shortly and it’s a fascinating tale.)

Over the course of two years he developed the concept, wrote the rules, procured sponsors, publicized the hitherto unknown concept, and in 1989 the first edition of the Raid Gauloises took place in New Zealand.

To commemorate the 30th anniversary of this legendary race, Hervé Simon, a member of the Executive Board of the FFTRI (an official French governmental sports federation) decided to organize a weekend of festivities to mark the occasion.  This included a short race followed by a gala dinner.

The co-organizer was Jean Baptiste Calais, a veteran of three Raid Gauloises, who recently raced on the French team that took second place in the Expedition Oregon race in the USA.

A Warm Welcome in Risoul

The Haute-Alpes region of France is Jean Baptiste’s playground for training, so it was a logical location for the anniversary celebratory weekend. The mayor and the tourism office of the ski resort of Risoul 1850 hosted the festivities and they were the perfect hosts in a stunning high altitude location.

At 1,850m Risoul is a family friendly resort that is a hive of activity during all four seasons. Driving on the road up from the valley to reach the ski station, there were at least a dozen hairpin curves to maneuver, each with a sign indicating a famous road cyclist; a stage of the Tour de France arrived in Risoul in 2014, and La Vuelta passed thorough that same year. Risoul also sponsors an adventure racing team, Team Raid Vauban Risoul; it is clearly a mecca for all outdoor activities.

The race was held on Saturday, July 13th, and teams signed up either as a four-person team or two-person, in mixed or single sex formation (the Dalton Girls raced as a team of four women.) Racers had two distances to choose from; 59kms or 38kms. The race disciplines were orienteering, mountain biking, trail orienteering and rafting.

Race numbers and timing dibs were collected either from the tourism office on Friday evening or on the morning of the race.

The race start was set for 09:30, at the base of the ski lifts. The starting line was the usual joyful chaos of any adventure race as racers mingled, chatted nervously and took selfies. Although there was a lot of bantering in French between the veterans of the original editions of the Raid Gauloises and the younger generation of racers, there was  an underlying current of tension as the racers prepared to do battle.

A slightly flustered Emmanuel Elalouf, who had raced in the original Raid Gauloises, said, “We put our team together and said we were going to race for fun, and here we are, twenty years later and it’s still the same stress before the start, you’d think we’d have learned by now!”

Hervé Simon gave a short race briefing in French before the start during which he exhorted the racers to carefully read the road book, emphasizing that this was a weak point for adventure racers. As well as the safety aspects, there was also an irascible land owner to look out for. After he spoke, it was Gerard Fusil ‘s turn to address the gathered racers, as well as Christian André, the head of the tourism office.

After the speeches, the Raid Gaouloises 30th anniversary race for the teams of four began at 09:40. The first section was a scored sprint orienteering section of 3km. Racers swarmed out like hungry ants as they scoured the grounds around the ski slopes for the coveted CPs.

Returning to the starting line arch, they hastily transitioned to their mountain bikes for a 19km section with 450m positive elevation gain and 1,100m descent. The race for the teams of two began at 10:30; on the website this distance was coined “Discovery.”

The MTB route was mainly technical single trails. This SleepMonsters reporter was briefly posted halfway through the section to take photos and the overwhelming smell of over-heated brake pads as racers navigated the descent attested to the difficulty of the section. We joked that the many racers on the “Discovery” distance were probably primarily discovering that they needed to work on their downhill technique!

The transition area from MTB to another trail orienteering section was next to a field of sun ripened golden wheat, behind large piles of mulch; the flies were delighted to greet the sweat-drenched racers as the temperature soared.

The trail section led the racers to another transition in the fortified village of Mont Dauphin. This stunning UNESCO World Heritage Site, designed by the famous French military architect, Vauban, was built in the 17th century.  Looking for a brief respite from the heat, several racers dunked their heads in the village fountains, while bemused members of a wedding party surveyed the incongruous scene.

There was a time cut-off at 15:00 on this section but the Race Director extended it by a half an hour. At this transition, several racers mentioned how much they were enjoying the orienteering maps.

The final section was 17kms of rafting on the Durance river. There was a time cut-off here as well. The Italian racer Marco Ponteri, a Raid Gauloises veteran, was racing with his eighteen-year old daughter, Anna Clelia. Marco explained afterwards that they were using the race as training for a much larger challenge later in the year. Unfortunately they missed the rafting cut-off by a few minutes, hobbling in to the transition with heat-flushed faces.

This section on the Durance river was a welcomed relief from the heat for all of the racers. Many of their families were waiting for them at this transition, enjoying a riverside picnic, and the mood was festive.

Racing With A Legend

The teams of two were able to take to the river in inflatable kayaks but the teams of four had to wait for another team to arrive to take off in the 8 person rafts. A neophyte team was paired with the ‘Raid Gauloises Love Story’ team which included Marc Balaskovic. Marc competed in all of the editions of the original Raid Gauloises.

As Marc was briefing the newbie team, they asked him how many Raid Gauloises he’d done and when he said “All of them!” there was a respectful silence as they digested the information. One of the rookie racers had cracked a rib on the mountain biking section and as he’d never rafted before, the tension was etched on his face; he couldn’t have been in better hands.

The race co-director, Jean Baptiste Calais, had worked tirelessly to prepare the race portion of the river, clearing branches and cutting trees. Judging by the delighted expressions as the racers exited their rafts, all of his hard work paid off.  He was also doing security on the river and when one boat capsized, he was into the river faster than it took those on shore to realize what had happened.

The final CP was manned by Claude Abitbol, a retired university professor whose expertise is adventure racing; he has studied the sport since its’ inception and he’s written three books in French on the subject.

Chatting with racers at the finish line in the grounds of a campsite as they sipped hard-earned beers, it was clear that they’d enjoyed the race. Philippe Narbonne and Paulo Scatoli have raced together for many years; in true Raid Gauloises spirit, they said that one of the main draws of adventure racing was the contact with the local population when they race abroad. (They’d raced the Transmarocaine in March of this year.)

Racers further back in the pack had a wait for the shuttle that would return them to Risoul. As the race director dashed around, tying up the loose ends at the finish line, I overheard one man, new to adventure racing, mutter about the wait, saying that the Race Director ought to buy them a bag of fries to compensate them. (I couldn’t help but wonder how he would have managed during one of the original  Raid Gauloises!)

It was impossible not to be struck by the irony of his entitled comment on this race to commemorate the 30th anniversary of the Raid Gauloises; the most extreme adventure, imagined by one man, that took teams to the furthest reaches of the planet and pushed them far beyond any perceived limits.

Congratulations are in order to Hervé Simon, Jean Baptiste Calais and the entire organizing team; adventure racing and certain racers needed a reminder of the origins of the sport as we know it today and you delivered brilliantly.

The festivities continued in the evening with the prize giving ceremony and a gala dinner in Risoul during which three films with historical footage of the original Raid Gauloises races were projected, interspersed with veteran Raid Gauloises racers who took to the stage to share their personal anecdotes and Gerard Fusil explained the how he got the idea to create the race.  But that’s another story…

(Ed. Note: SleepMonsters would like to thank the Risoul Tourism Office for their kind assistance in facilitating our coverage of this event.)