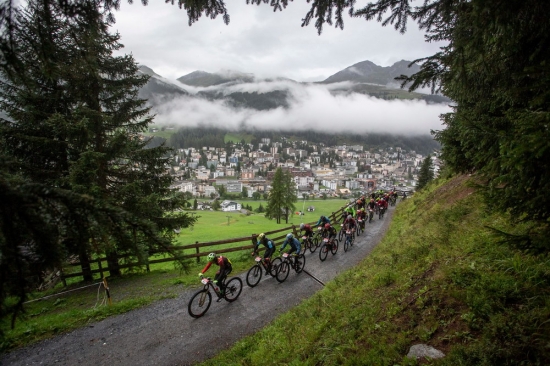 The Trek Selle San Marco teams rode to a superb one-two finish on the opening stage of the 2019 Swiss Epic, while the Shimano S-Phyre combination emerged victorious in the Women's category.

On the opening day of the 2019 Swiss Epic, from Davos to St. Moritz, the all-Italian Trek Selle San Marco teams put in a commanding performance. Michele Casagrande and his partner, Fabian Rabensteiner, crossed the finish line just 0.3 seconds ahead of their stablemates Samuele Porro and Damiano Ferraro. The women's stage victory margin was greater but the racing was tighter as the lead changed hands numerous times on the 86-kilometre-long route. It was ultimately the Shimano S-Phyre team of Corina Gantenbein and Kathrin Stirnemann who emerged victorious on the day.

The stage began with news of further rerouting, due to heavy overnight rain, and out on course no rider could dispute the decision. Within a few short kilometres everyone was splattered with mud, their glasses rendered useless and their kit reflecting the wet weather and muddy conditions faced on course. However, the weather and challenging terrain did little to derail the Trek Selle San Marco teams' superb performance. "We went to the front to try to control the pace early on, but on the long climb to the Albula Pass we could not match the Trek teams" Konny Looser, of the BiXS Pro Team recounted. The first 50 kilometres, as Looser hinted, had seen a large group of favourites testing each other's legs. Along with the two Trek Selle San Marco teams and BiXS the group also included jb BRUNEX / Fischer BMC, Devonbosch Stellenbosch, Texpa Simplon, Centurion Vaude and Buff SCOTT.

As the gradients steepened, the contenders started dropping off the pace set by the Italian quartet. The young jb BRUNEX / Fischer BMC combination of Casey South and Noah Blöchlinger were the last to falter, leaving Casagrande and Co. up front on their own. Having spent a training block in the Dolomites acclimatising to altitude, the climb to 2 312 metres above sea level, at the summit of the Albula Pass, did not leave Trek Selle San Marco short of breath. "We enjoyed the race today," a mud-caked Samuele Porro said after crossing the finish line. "We were stronger on the climb, but we did not want to push too much on the descent because it was really slippery. This was the first stage and we have a long week ahead. But today, we are really, really, happy" he concluded, knowing that their performance today will count for nothing if they cannot maintain similar form for the rest of the race.

For the Trek Selle San Marco team management the lack of a clear leading and support team worked perfectly on Stage 1. Porro and Ferraro were happy to roll across the line nearly alongside Casagrande and Rabensteiner. How that dynamic will develop over the next four days could be pivotal to who emerges as the 2019 Swiss Epic champions. Any in-fighting between the two teams could present opportunities for the likes of jb BRUNEX / Fischer BMC to ride their way into the leaders' yellow jerseys. South and Blöchlinger have it all to do in the remaining 261 kilometres, having finished 6 minutes and 1 second behind Casagrande and Rabensteiner on Stage 1.

The Women's stage winners may have a more comfortable buffer over the second placed team heading into Stage 2. The lack of the team dynamic, which is shaping the men's race, means Gantenbein and Stirnemann's 37.3 second advantage is anything but secure. After an opening stage which saw the lead change hands in the final 20 kilometres and on the back of Gantenbein's mild cramps in the last 3 kilometres of the day, there is a lot of work to be done. "That was a pretty hard day, with the mud and the rain" a smiling Gantenbein said on the St. Moritz finish line. "But yeah it was cool to have the downhill where we could catch up again and then make [up] some time" she elaborated. Explaining how they had caught and passed Centurion Vaude's Alice Pirard and Stefanie Dohrn who had held the lead over the Albula Pass, Gantenbein said: "The last few kilometres were really hard and I cramped a bit. I think it's because of the weather and the cold. Luckily, I had Kathrin [Stirnemann], in the last few kays she was like my motorpacing." Gantenbein was in good spirirts, , the cramps in her hamstrings clearly not bothering her unduly.

Pirard and Dohrn could not capitalise on their strong start to the stage. They summited the Albula Pass in the lead but lost a place to Shimano S-Phyre on the 7-kilometre-long descent that followed. The Centurion Vaude team were then caught in the closing kilometres by Ariane Lüthi and Samara Sheppard of Wielka Orkiestra Świątecznej Pomocy. The Swiss/New Zealand combination overpowered the Belgian/German team on the flat run in to St. Moritz and crossed the line just 1 second ahead. The result leaves Lüthi and Sheppard as Gantenbein and Stirnemann's closest rivals, while Pirard and Dohrn are well placed to challenge 38.3 seconds behind the leaders.

Wednesday's Stage 2 takes riders to the highest point of the race; the Laj Alv natural reservoir, at 2 543 metres above sea level. The route is back-loaded with climbing, with the day's two most significant climbs falling within the final 25 kilometres of the 69-kilometre-long stage. Based on the results from Stage 1  this should suit Trek Selle San Marco and the Centurion Vaude women, but only time and the Swiss Epic will tell if that prediction holds true. To follow the action from the course from 08:00, local time, visit www.swiss-epic.com.

BRUNEX / Fisher BMC Victorious in Lenzerheide at the Swiss Epic
The Queen Stage of the 2019 Swiss Epic saw the race traverse alpine passes and valleys from St. Moritz to Lenzerheide. The technical

International Stars Set to Take on Swiss Epic
The elite women's field for the 2019 Swiss Epic is shaping up to feature a distinctively multinational feel. Swiss marathon