BRUNEX / Fisher BMC Victorious in Lenzerheide at the Swiss Epic 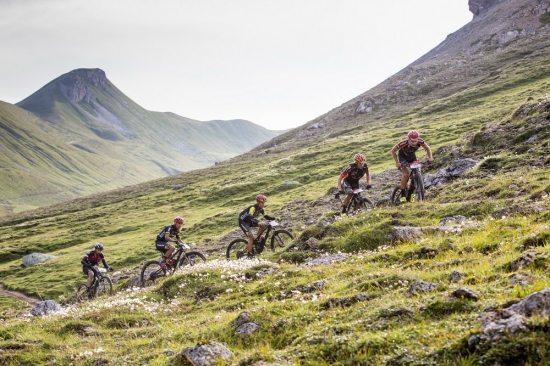 The Queen Stage of the 2019 Swiss Epic saw the race traverse alpine passes and valleys from St. Moritz to Lenzerheide. The technical closing kilometres rewarded the cross-country riders jb BRUNEX / Fischer BMC with a stage win.

The Queen Stage of the 2019 Swiss Epic took in an 80-kilometre-long route through the alpine passes and valleys from St. Mortiz to Lenzerheide; on Thursday, 22 August. With the stage concluding with a section of the World Championships XCO course it was unsurprising that the cross-country riders in the field thrived. After coming close on Stage 2 the jb BRUNEX / Fischer BMC team secured their first stage win of the race.

After missing out by just over a second on Stage 2 Casey South and Noah Blöchlinger ensured they reached the finishing straight well clear of Trek Selle San Marco A. "Today was good for us because it was a technical course" Blöchlinger reflected. "We pushed from the beginning today. At the top of the Albula Pass we had a small gap with the Italians [Trek Selle San Marco A]". Elaborating on this partner's initial comments South added: "At the bottom of the long descent to Filisur they [Trek Selle San Marco] had a gap. But we just stayed calm. We pushed on again and passed them on the climb to Lenzerheide. So, it worked out perfectly"

Once they had the lead there was no looking back. South and Blöchlinger rode home the stage winners in a time of 3 hours, 31 minutes and 1.7 seconds. In so doing they cut the Trek Selle San Marco A team's general classification lead by 33.9 seconds. Michele Casagrande and Fabian Rabensteiner still hold a commanding lead of nearly five and a half minutes though. They could therefore afford to ride a little more cautiously.

"It was a good stage again for us" Rabensteiner stated, non-plussed by the loss of half a minute. "In the end my teammate [Casagrande] had a few problems, because he hadn't eaten enough. So, we decided to go at our own pace and come home in second position today." The final stage podium place was claimed by the Texpa Simplon team of Michael Stünzi and Marc Stutzmann.

Stünzi and Stutzmann had spent much of the day yo-yoing up to and then loosing contact with the leading quartet of riders. Having moved into third on the general classification with their second position on Stage 2, their third place on Stage 3 further secured that spot. Behind them the sub-plot for the day was the strong showing by Centurion Vaude.

The junior partner in the team, Vinzent Dorn, struggled with the altitude on the opening two stages but felt much better on Stage 3. "It was great riding today" Dorn grinned, after broadsiding to a skidding halt on the wet grass of the finish line. "I think I had some problems with the altitude on the last two days. But today everything went well and I was able to put down the numbers I know I can. I'm so happy that we were in fourth place today and hopefully we have a gap to the others [BiXS Pro Team and Devonbosch Stellenbosch], so we can move up in GC."

Dorn's good day, it transpired, did lead to a general classification improvement. He and Daniel Geismayr find themselves fifth, with two stages of the Swiss Epic remaining. They are 1 minute and 48.2 seconds behind the fourth placed BiXS Pro Team of Konny Looser and Oliver Zurbrügg; who finished fifth on Stage 3.

The now clearly designated Trek Selle San Marco support team of Samuele Porro and Damiano Ferraro slipping down to sixth. While Devonbosch Stellenbosch lost over an hour and dropped out of the top ten entirely. Those two team's misfortunes have opened up the men's general classification standings, allowing Texpa Simplon and Centurion Vaude in particular to profit.

Short but brutally tough, and exhilaratingly entertaining, Stage 4 is the penultimate stage of the 2019 Swiss Epic. It provides a 48-kilometre loop, with 2 150 meters of climbing, through some of Lenzerheide's most famous trails. There is not many kilometres within which to make up lots of time as a result. The racing is sure to be fast and furious none-the-less.  To follow the action, tune in at 08h00, local time, on Friday by visiting www.swiss-epic.com.

International Stars Set to Take on Swiss Epic
The elite women's field for the 2019 Swiss Epic is shaping up to feature a distinctively multinational feel. Swiss marathon