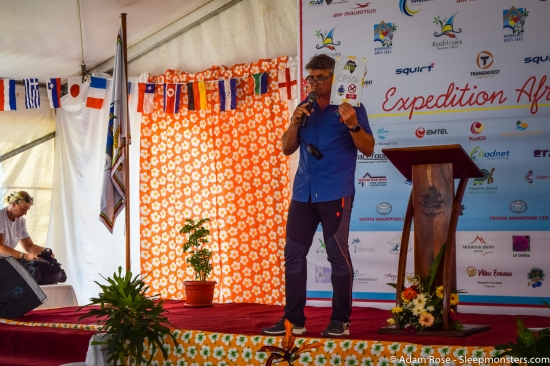 Stephan gave a customary no-nonsense briefing to answer all the questions, and such was the preparation, it finished pretty sharpish. Herewith the details:

TA’s 1, 2, 5, 6, 7, 9 & 10 will all have water bottles for the teams, 27 litres in total. Essentially the island TA’s won’t, which means teams better be prepared with their supplies, especially as some are not keen on doing water stages at night. Thirsty on a desert island isn’t an attractive scenario.

Roads are not closed during the event. Teams will be using many of the winding, narrow arteries that crisscross the island, and the locals drive pretty scarily in some cases.

Cell phones won’t be sealed, because Expedition Africa chooses to trust the teams. Stephan was explicit about that. If teams are going to cheat, they’re going to cheat. There won’t be any policing. In theory, they should only use the phones to call HQ with problems.

Coloured wrist bands will be used to distinguish stages, with each racer needing to punch the band to prove visiting a CP. It means three members can’t sit under a bush while the fourth does all the work. Every missing armband at a TA means a 60-minute penalty, to be served at the final TA.

Swim stages always involve wearing a wetsuit, lifejacket and shoes. If your foot touches the water, it must be in shoes. The exception is stage 2 snorkelling, since only one team member must swim down to do the punching. Wearing a lifejacket would make it impossible, and a wetsuit is optional as they will be swimming, not scrambling across the razor-sharp coral. The wetsuits are simply about preventing flesh wounds. Wearing gloves is even recommended for the island visits, as falling hand-first on to the coral will be nasty.

Wearing wetsuits will actually be a bonus when crossing some of the islands at high tide, as the vicious thorns and African cactus will shred bare lower limbs, requiring long detours.

On that snorkel stage, there will be three punches per CP to avoid queues, one metre apart, anchored to a concrete block.

Resupply bags have to remain in the boats while racing. They can be brought ashore for unloading in the TA, but each bag left in TA while a team is racing means another 60-minute penalty. Per bag.

Those penalties will be served at TA11, which is devoid of resources since that’s the case for all TAs. The timer will start as soon as they enter transition, and once complete, the team can do the final 3km SUP to the finish. That stage will still require shoes and a life jacket but no wetsuit.

Paddles should be tied to the boats, to prevent them blowing away in the ever-present wind. Will racers remember?

Teams should anchor their boats so as to facilitate subsequent use across tidal changes. There will an EA flag to help this, and Stephan deliberately avoided large bays as the tidal variation would be too great.

The zipline is early in the race, and has already been spotted as a potential chokepoint. The timing is 1 minute for the 600m zip, and 4 minutes turn-around. This efficiency should help, and teams will only need to bring a helmet, as harness and carabiners will be supplied. Stephan said that if teams get impatient waiting, “just eat a chocolate.”

Nonetheless, some teams will skip CPs en route to get there early. This isn’t going to help, since short course teams are required to step aside until all full-course teams have passed through. The same rule applies to the via ferrata and abseil late in the race. Common-sense will apply, so a short-course team won’t be waiting if no-one else is queueing.

On leg 27, between CPs 95 and 96, there have been building works at a hospital since the route planning. The road is now gated. Teams can simply push their bike through the pedestrian access and continue on their way. This is significant because teams might forget this detail in their fatigue, and look for time-consuming alternatives.

During biking legs, there will be plenty of jeep track travel. These generally have two concrete tyre strips. The caution here is that there is often a sizeable drop on the edges of the concrete, again a danger when tired riders shoot around corners on steep hills.

As far as the biking goes, I’d opt for a carbon hardtail for this race. There really isn’t a need for dual suspension since the stages are neither long nor technical, and often involve tarmac.

Rudders aren’t allowed on the boats at all. This is a major technical detail, as the locals use rudders, the winds are strong, and trying to tack without one is going to be a challenge. Their restriction is not  sadism, but the damage teams might cause to the boats in ignorance, especially over shallow reefs. These boats must be protected as they are the source of livelihood for many fishermen. The question was raised about using an oar, or a homemade rudder, or – “No rudders!” was Stephan’s emphatic response, “Use your sail or handkerchief or whatever instead.”

Finally, the only cut-off is at 6am on Friday morning at T10, with teams proceeding directly to the SUP to the finish.