The Prologue That Wasn't 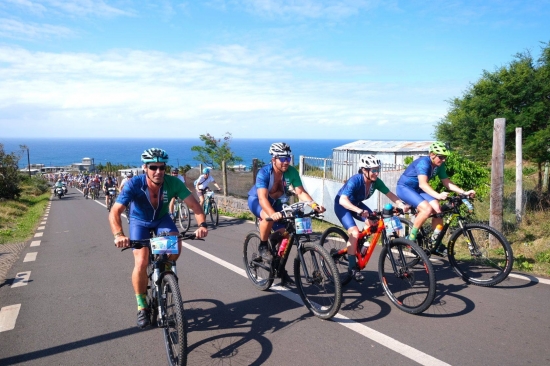 Q: How do you get 238 bikes across a hilly island without any effort, guaranteeing there won’t be any damage or logistical issues?

A: Describe it as a warm-up ride for the competitors.

The unprologue began as 12km to the required TA at Mourouk Beach. Led by a substantial police escort and flashing lights, the horde poured forth from the villa, keen as mustard, and didn’t take the direct route. Following on a scooter, I was a little puzzled at the deviation from Google’s recommendation, instead traversing the coastline for a few kilometres. Then a little climb. Then a flat bit. Then a longer climb. Then a rapid succession of climbs and pseudo plateaus. Increasing, fading, building, surprising. The wind strengthened, too, which was both a blessing and a curse in the heat. Teams pushed the pace although it wasn’t a race, trying to put the hammer down to intimidate the competition. Did it work? I have no idea. Russians Team Blizzard, who won at EA Namaqua, hardly seemed to be sweating, out for a pleasant cycle, while some of the Saffys were proper grunting and grinding up the climbs.

Others hid in the peloton, no-one went for an outright domination, and plenty felt the ride to be a proper wake-up call. Canny teams had already explored Rodrigues, either arriving weeks before (Swedes Greener Adventure Team, winners of 2017) or at least a few days, renting scooters and vehicles to make sense of the geography, so the non-prologue went as expected. Other teams only arrived last night, or simply hadn’t afforded the time and money to recce, so the harsh steepness left them wide-eyed.

True North Racing (21) felt it to be hard work, the first kilometres having lulled them into complacency. “The hills, they don’t stop, the climb goes and goes.” They felt it was really helpful, giving them an idea of what to expect, though to be frank, their team is still missing two bikes. Although all South African bikes were shipped two weeks ago, Johan Bornman and Marlize Moolman slipped up, and are still rideless. Emergency measures mean the bikes are being flown overnight from Mauritius, which will be useful for the riding on stage 4, expected to begin at 7pm on Sunday for the front teams.

As the teams crested the last hill, the view on to the south side of the island swam into view, and wow! Seriously wow. Breath taking. White fringed coral reefs extending far to the horizon, an ancient volcanic crater leaving behind superb turquoise lagoons swept with sandbars and deeper channels. Something straight out of a movie. Monsieur Viaene and I had to stop riding to drink it all in, and I took failed representations of reality.

True North Racing described it as “the view that took all the pain away”, an opinion shared by Team Lionheart, though they said, “the juice was worth the squeeze,” speaking in Americanese.  Lionheart’s strategy is to communicate, motivate and limit mistakes, which can’t be far wrong for such a novel event. Logistical challenges are a real concern, together with the constant exposure to saltwater at every transition.

The Gomtorskollies were less intimidated. “The ride was nothing! We do that every morning before breakfast!” You bet. They almost had a crash on the winding roads, which was a lesson well learnt, and too, the need to avoid being separated.

Daryl from Bloed and Omo G4K4 came up to me full of vim, “Wow, that was hard!” Their team struggled already, with a couple of lifts in the back of a pickup now on their race CV. He raised an important point about the severe crosswinds. On a fast descent, it could throw you right off course, as it nearly did to him. Translation: into volcanic rubble, spikey plants, thorns, nasty stuff.

A titbit picked up from Andrea Shirley (Island Bay Sorbet) was her plan to attach a small towel to her pack strap, “to wipe the sweat and suncream from her eyes” on the bike ascents. She wasn’t intimidated by the ride, having done the scooter scout, and felt this ride had been easier and quicker than expected.

On finishing the ride at TA1 to leave their bikes ready for tomorrow’s stage 4, teams milled around the hotel, a spectacular location on a broad beach, the turquoise stretching forever, palm trees lining the shore, kite boarders pulling off moves in perfect conditions. It was trippy.

The boats to be used in tomorrow’s start were waiting on the sand. Teams poured over them, some to rig their makeshift sails, to brand the sides with sponsor stickers, or just feel the weight knowing low tides might require some towing or heaving. Brightly coloured, loving maintained, fibreglass over a wooden infrastructure. Rumours had been of 600kg weight, but they shifted under a single person’s efforts, though that was completely unladen.

There was clearly some mulling going on. Martin Dreyer was a little freaked out, “amazed at how technical the sailing of these boats is.” It was much trickier than he anticipated. Bear in mind he has more experience in his little finger than almost anyone on this race, so if he’s worried, you might wonder what’s going to hit those who are optimistic.

The best sail design is a big matter of discussion. Some are trying to use sails from kiteboards and sailboards, circular affairs, airfoil kites, kayak sails, ground sheets, flysheets, even the small pop-up shelter favoured by families avoiding sun on the beach. Nothing can be screwed into the boat, or damage it in any way.

Atlantic rower Peter van Ketz and Josh Hayman of Nyamezela have engineered a particularly small solution, which Josh’s grandmother then stitched together. According to an anonymous source, if they do well, Granny’s gonna be a hero but if not, family dinners are going to be quite awkward.

In contrast, Team KeyHealth Nevarest’s (16) Jonathan Ham is a SA national sailing champion, has raced European Championships and World Championships, his whole family focus on sailing with a passion, and he’s gone for a design very closely modelled on that used by the locals. A large triangular sail, attached to a tall mast, it requires removing and reinserting the mast every time the boat tacks. The locals use it, it must work, but it sounds challenging.

So, where to put your money?  At 1pm Sunday, the teams will climb into the boats as part of the regatta, crewed by two experienced sailors, and head for the outer reefs. Once there, the teams will be thrown into the deep end for a 3km swim and snorkel back to the shore, finding 3 CPs en-route underwater. In windy conditions.

The sailors will turn around and continue their regatta racing, back to shore, leaving the boats ready for the returning teams, but sans rudder, proper sail and mast.

Once the teams hit land, they load their gear into the boat for it to become their floating transition, then head inland to complete multiple stages (trekking, biking, zipline). All spare food will need to travel on the boats. There won’t be any other form of resupply, other than teams foraging en route.

For stage 7, they will return to their boats, load everything onboard excluding bikes, then head out to sea for some island hopping. Tides will affect their passage enormously, as will the wind. The distance to the furthest islands takes over an hour by motorboat.

This will take them into the night, swimming between islands for checkpoints, stumbling over submerged coral, hacked by island shrubbery, until eventually back on the boats. Then off to land again. Bikes will be onboard at times. This formula will be repeated ad nauseam until the teams finish, resign or succumb.

The boats AKA floating transitions are unconventional for an unconventional sport, which is saying something, and the success of Expedition Africa Rodrigues will directly affect what other races consider in future, especially when planning events for a smaller area.

Teams are excited at what they see as an amazing concept, can’t wait for tomorrow, and neither can I. It’s going to be epic, in every sense of the word.