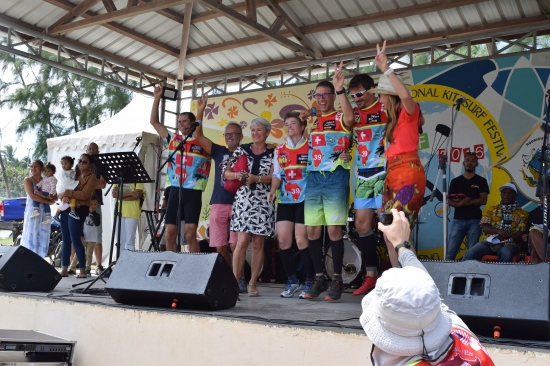 Riding down the long hill to the start, dark clouds were brewing to the south. Storms over Mourouk? That would be hectic. With a southerly wind, they scudded in the direction of the Mourouk Ebony Hotel, as teams assembled their bikes, grabbed water supplies, tried last minute to learn techniques to assist the sailors of their boats for the regatta, and prepped those infernal sails.

A light rain hit. Very light. No problem at all. Thankfully the strength of the wind meant rain couldn’t settle in, and it disappeared almost before it arrived.

Moving between the teams, it became apparent that the dominant theme was Hope. Not courage, or bravery, or strength, but Hope. We hope we can steer the boats. We hope the wind doesn’t send us to the Seychelles. We hope our boat isn’t the one to capsize, and hope we aren’t the team to lose the checkpoint passport. If the other teams do, we hope our laughter helps. ðŸ˜Š

Locals had come in large numbers, whether to watch the regatta or simply the curious race unfold. Families picnicked beneath the trees, kids played across the beach, teams posed for obligatory photos, and it was quite festive.

At 11am, all teams assembled before an outdoor stage, where Heidi welcomed the teams, and let them know it was necessary to wait for 1pm to start in order to take advantage of the tides. This also allowed a more important event to take place, a touching tribute to team member Julien Samson of Powerbar Swiss Explorers, who passed away last October during preparation for Expedition Africa Rodrigues.

Julien’s team members assembled on the stage with Julien’s parents. Francky David came forward to speak. He said Julien was already “directly jumping on the site, when do we start?!”

He then invited the crowd to stand, for a minute’s silence, but please could they all jump like Julien? It was amazing, the whole crowd grinning, jumping, celebrating pogo sticks.

There was also a memorium for Anne Marie Picard, wife of Manu who has erected all the rope sections of the course. Anne was instrumental in staging the event from day 1, but passed away 3 weeks ago in France. Her family said a few words, then invited everyone to accompany them in putting flowers into the sea. Heidi asked the crowd to hold hands, standing in silence for a moment, again prayed for the safety of all, then we proceeded to the shore.

Swiss Powerbar walked ahead, arms around shoulders, the parents close behind. With a large crowd watching, they went into the shallow water about 50m, stood together silently, before joyfully scattering the handfuls of petals and allowed the wreaths to float away. They embraced.

Ashore, more than a few people suddenly had something in the eyes, which had to be wiped away. The team returned to the sand. Francky spoke up as he reached the throng.

“The water is perfect.”

They were here to race and to celebrate.

----
The race is live. Watch the tracking on http://expafrica.live