Expedition Africa - How it Works! 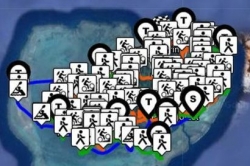 Expedition Africa Rodrigues is going to be a real one-off with teams using local sailing boats as a mobile transition and the 350km course set on an Indian Ocean island 18km long and 6.5km wide ... there are 109 checkpoints.

Here's how it is going to work over the coming 5 days.

For the race start today teams climbed onto the boats as part of the regatta, crewed by two experienced sailors, and headed for the outer reefs. Once there, they were thrown into the deep end for a 3km swim and snorkel back to the shore, finding 3 CPs en-route underwater. In windy conditions.

The sailors turned around and continued their regatta racing, back to shore, leaving the boats ready for the returning teams, but sans rudder, proper sail and mast. (Teams will install their own sailing rigs bought from home.)

Once the teams hit land, they loaded their gear into the boat for it to become their floating transition, then headed inland to complete multiple stages (trekking, biking, zipline). All spare food will need to travel on the boats. There won’t be any other form of resupply, other than teams foraging en route.

For stage 7, they will return to their boats, load everything onboard excluding bikes, then head out to sea for some island hopping. Tides will affect their passage enormously, as will the wind. The distance to the furthest islands takes over an hour by motorboat.

This will take them into the night, swimming between islands for checkpoints, stumbling over submerged coral, hacked by island shrubbery, until eventually back on the boats. Then off to land again. Bikes will be onboard at times. This formula will be repeated ad nauseam until the teams finish, resign or succumb.

The boats AKA floating transitions are unconventional for an unconventional sport, which is saying something, and the success of Expedition Africa Rodrigues will directly affect what other races consider in future, especially when planning events for a smaller area.

Teams are excited at what they see as an amazing concept, can’t wait for tomorrow, and neither can I. It’s going to be epic, in every sense of the word.

This is the dotwatching advice from the race.

This years race is very unique -see the attached image containing the suggested route and all checkpoints. You will agree that it would be impossible to follow. We are therefore only making the route visible in sections during the race.

Please note that even though the team positions auto-update, you will need to refresh your browser every now and again in order to view the route changes and checkpoints visible on the map.

As a general rule, the race is in a clockwise direction (transitions) but cycle and hiking legs could go in any direction. Some transitions are visited multiple times. The leaderboard (automated geofencing) will display the first recorded visit to each transition. The SPOT trackers will be operating on the edge of the Globalstar satellite network, so updates may be less frequent than usual (approx 20 minute intervals).

Expedition Africa 2019 Rodrigues will not only be an adventure for the competitors but also for you, our dot-watchers. Enjoy the journey!www.expafrica.live