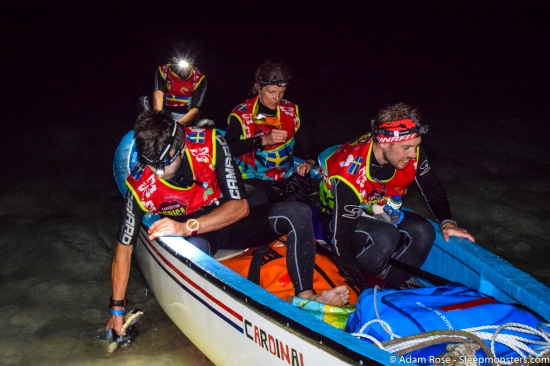 The first team to arrive at T4 on Pierrot Island were the Swedes, Greener Adventure Team, at 3:02am. Only 7 minutes slower than Stephan’s prediction – solid! Under paddle power, they came in strongly, paralleling the shoreline to round the point, on to the small beach where the light beacon had been erected. They were quite cheerful, and they hadn’t taken strain in getting here. (The stage) “was easier than expected”. On a high tide, they were able to land on the sand. Their sail was unused. “It was too much trouble in the dark” and they are excellent paddlers. They judged their pace at 10min/km, and had taken bearings, compensating with the required 18 degree declination.

The trekking had been slower than anticipated, especially the second trek, but the biking hadn’t been a surprise – no doubt due to their extensive scouting beforehand.

Jonas pointed out that KeyHealth Nevarest had incurred a penalty just behind them at T3, passing boats in the night. Nevarest had docked on the east side of Hermitage island, on a broad beach, rather than circling around to the TA on the west side. It was the logical approach for speed, Hermitage being quite narrow, but not the legal one.

Cecelia was going well, although the first day had been tough for her as usual, trying to keep up with her strong teammates. (Yes, they are built like machines, but athletic rather than bulked up). She expected to settle into the rhythm from day 2 – she “had survived so far”.

The team’s efficiency was marked. They rinsed their shoes almost in unison as they left the boat, strapped swimming floats to one thigh with a bungee, then swivelled it outside until needed on the swim. They had carbon hand paddles to aid speed. Each racer had 3 glowsticks on their pack backs, ready to switch to a new one easily, also enabling easy spotting when swimming on their stomachs. They downed Peronin, moved quickly, and left within 18 minutes after first anchoring the boat deeper in the water.

Keyhealth Nevarest arrived 8 minutes after, under glorious sail, steaming along the same tack to enter the beach. They had made good time from T3, easily 20 minutes up, also happy to talk but felt a little chilly from the leg thus far. That’s to be expected as they weren’t exercising as hard.

They were disappointed at their error at T3, but it hadn’t been intentional – they’d just beached at the first opportunity. Read the rulebook – they’ll serve a 60 minute delay at T11, critical in a fast race like this. They’d had a couple of issues finding CPs on both trekking and bike legs, but looked confident. Jonathan Ham was the principle navigator, and said he “was glad (they) found the islands, It would have been pretty easy to sail past” in the dark. As an expert sailor, it had been much harder to sail without a rudder, using paddles to steer, and they all paddled whenever heading directly into the wind.

Their transition wasn’t quite as smooth than GAT, needing more confirmations of tasks from each other, and didn’t have the details in their equipment that comes from years of racing. For example, they were using battery-powered glowsticks, which could leak, and needed to check the batteries manually. They also wore them on random locations, which was fine for running but less visible in the water. Both the following two teams did the same.

They also needed to put on their wetsuits, which took time, again mirrored by those two following, and none had swim-floats.

They also left the TA in 18 minutes, (3:55am) taking a different route along the shore. This wasn’t recommended due to the high tide, resulting in either wading through deep water, or coasteering along jagged rock edges.

At 4:05am, Merrell came in under paddle power. “It was the fun. The boat goes way better than we thought.” They chose to forgo flippers for the swim-run.

The previous trek and biking legs had been “short, interesting – you won’t get bored here, and you have to keep your lights on the whole time”

Tweet said the nav to the islands had been easy in the dark, thanks to the obvious lights from the marshals.

Five minutes later the Russians Blizzard arrived, electing to stay onboard as they prepped their gear. Natalia Zimina hadn’t enjoyed the stage, afraid of the ocean. They were markedly quiet in TA. Natalia was meticulous in her inspection of the ground where they changed into their wetsuits, not wanting to incur a one-hour penalty for accidentally leaving anything lying around. The no-litter policy is strict on the race.

Merrell left after 17 minutes, taking the shore route as, followed by the Russians at 22 minutes transitioning.

The beach deserted again, the tide started to ebb. Stephan had been emphatic about anchoring the boats appropriately, and none of the top 4 had taken his advice. Admittedly some of the anchors could hardly be described as such, so maybe some dragged, but within an hour or so, the boats all lay parallel to the grass edge, on sand. The Greener Adv Team vessel was sucked down hard, 2 of us couldn’t budge it, and the Russian’s had ridden up snug against it, trapping it from the sea.

What would the teams do on return? Would they wait for help? They couldn’t afford to, with such slender margins in the race. None of them had anchored deep. Would following teams have a real advantage, seeing the predicament, taking appropriate measures, and possibly leaving before the original front runners?

Stephan saw a photo of the snafu and issued an edict. “All teams must help each other to get unstuck, or can try to ‘convince’ locals to help”.

At 6:50am, GAT returned along a footpath, Cecelia leading the way. Their faces dropped when they saw their boat. “Holy crap!”

Then huge relief when 3 coastguard crew and the marshals pitched in, using 2 wooden poles as rollers. In 10 minutes they were gone.

KHN followed at 7:40am, and had a similar reaction, “What happened here?!” They’d found the swim-run quite tough, especially as not the greatest swimmers, having to fight the currents on the return swim. In 15 minutes, they too had departed.

8:25am the Russians arrived, looking bedraggled. Same reaction, same relief. Natalia had had a difficult swim, she twice “almost got swept into the ocean”. Fortunately, some of them were still able to laugh.

It was fascinating to watch these elite teams perform. Having witnessed GAT at their previous win, they were no surprise, so it became a matter of studying minute details, the gear, the communication, the focus. Any of these teams could win. It just takes one mistake, one missed CP in 109, one dropped plastic bag for things to swing quickly. Podium positions have often been separated by minutes, even seconds, after many days racing.

It was also satisfying to see some suffering. They weren’t all cool-headed, calm, unshakeable 100% of the time; instead, there have been moments of panic, fear, pain, and yet they never let it take control, to jeopardise the race. Blizzard had made huge strides after the snorkelling to get up into 4th place, but with many watery stages ahead, it would be very difficult to overtake the 3 teams ahead, who lap up the stuff.

Team Merrell has won Expedition Africa more than anyone else, are vastly experienced, excellent paddlers, and keen to return to the world champs if they win Rodrigues, to make up for tragic obstacles last year.

And then we have Greener Adventure Team. For Blizzard to beat them and reclaim their crown, surely it would be a matter of GAT making a mistake. We’ll see.