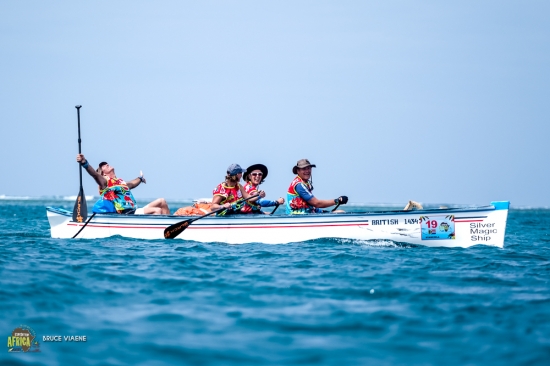 This race is a curious beast. With so many stages, and all so short, it has encouraged many competitors out of the jungle, with visions of finally getting that holy race completion, of crossing the line where lesser attempts have failed, of finally cracking it.

Is this delusional? Will the 350km length, compared to the regular 500km flavour, and the alleged focus on fun over competitiveness, reap rewards? Many experienced types have their doubts. In fact, the assumption might not be limited to the newbies. It could easily be the case that some podium pushers become unstuck, or get shown up by the seriousness of preparation by younger teams.

The shortness of the course, and maybe the location, has somehow led to an unusual number of families, couples and neighbours participating. Team Blistering Barnacles (3) features two couples, related by brother Mark and sister Wendy. Mark and his wife Tracey Robson are the nervous newcomers, while Jo and Wendy Fjellstad will be showing them the ropes.

Perpetual expedition racer Phil Scarf of EnduranceLife has joined forces with his wife Jackie, who has done three Itera’s herself, to bring their sons Joey (24) and Ben (28) into their first expedition race. Phil is fresh from the recent Itera Scotland of two weeks ago, where he led another three newbies to a final 4th place position against some very experienced teams.

Team Nyamezela again has two couples, the newbies being Sally and Josh Hayman (with Wartrail and Transkei Tuff on their CV), while Peter and Kim van Kets are the ones in control. Furthermore, Peter is a professional adventurer and public speaker, Atlantic solo rower and winner, another Atlantic crossing, South Pole racer, explorer - you get the idea. He must be one of the few, if not only, professional adventurers in the race. They are all viewing Expedition Africa Rodrigues as a “romantic getaway”, and as neighbours, “can’t afford for it not to work out.” They still want to love each other afterwards and complete the full course.

Crusader Logistics (23) is team with a real pedigree in the form of Martin and Jeannie Dreyer. He did the Bull of Africa, EcoChallenge and Primal Quest back in the day as part of Team Mazda, and this is his return to expedition racing. His wife Jeannie was on winning team Painted Wolf that triumphed in EA Knysna (2016), and she won the Munga 400km trail run in 2017 as first female. Stuart Roos and Nic Jordaan are their novice team mates, though they have good experience in mountain biking, including participating in the Freedom Challenge, an epic nonstop MTB race across South Africa.

Martin feels that if they “don’t have a beer every evening to close the day, it will be disappointing”. They recommend the Blue Marlin brand over the Phoenix alternative. They see micro navigation as being critical to success in the race, with navigators having to be in the map constantly, as bundu-bashing opportunities appear very limited.

In terms of paddling, they find it comforting to know they are surrounded by reef. Normally, races that feature ocean paddling have much bigger consequences, but as long as they don’t hear the breakers, they are golden.

Martin says South African teams should be less scared of the spiders, though when it comes to the biking, the question is “who’s gonna be Spiderman?”

Jeannie says she’ll wear a buff around her face if she’s in front, but she’s likely to go so fast out of fear, Martin wants her at the back. She’s “poep-scared” of spiders. Stuart has a potential glitch in the damage he did to his left calf muscle performing hectic dance moves two weeks ago. Nick meanwhile has a neck injury from whipping his head out of the water during his swimming training - he forgot about the snorkels.

Martin thinks teams will underestimate them. His prediction is that “like a python, they’ll squeeze their prey tighter with every breath”, until they conquer all. Watch out for them.

Elgin Rookies (43) are “going for a rum” said Ryan Larkman, husband of Tamaryn. People mistake their intent as going for a run, but alcohol figures higher on the list of priorities. Their experience extends to one 24hr race in Tulbagh in April, and the 30hr Vasbyt, both in 2019. They’re all neighbours, living in Grabow, with three literally separated by one house. Why did they enter? They claim wine made them do it, mixed with doses of champagne and bravery after a 12hr race in March. Boating will be their biggest challenge. They’re so not serious about actual racing, if the weather looks hostile, they’ll stop mid-race to have a game of frisbee, and don’t expect to do any paddling, relying on kiting to power their boat.

Team Riders of the Lost Ark hail from Israel, and are family. Mother Carin Goldblatt is accompanied by her three sons, Guy, Daniel and Jonathan.

Digging deeper, and for the sake of brevity, let’s just summarise our current findings:

That is freaky. Preposterous. And friggin’ awesome. Having waxed on about Expedition Africa and relationships, it’s pretty clear that this peer-reviewed science ratifies it as a core ingredient. It’s also encouraging that so many have gone to expedition racing so quickly, with barely a year’s experience. It can take years for people to summon the courage for an expedition.  Oh, and competitors  Lynette Hechter and Fritz Van Eeden of team Splash, Flash and Dash became engaged today, which is just icing on the cake.

In Afrikaans, we say that if you're going to get married, you should "eers 'n sakkie sout saam opeet", which means to first eat a small bag of salt together. Adventure racing is a LARGE sack of salt, in those terms, and is as perfect a test of future marriage relationships as you could hope for. Patience, encouragement, support, controlling one's temper, listening to others, not jumping to conclusions, not apportioning blame, focus on the main goals - the list is endless. For those so inclined, it fits the advice of 1 Corinthians 13:4-8 spot on. So you could say, scripture was pointing to adventure racing in a roundabout way. ;)

And what about the posterior cleavage, you ask? Well, in speaking to so many expedition “race virgins” (a team Island Bay Sorbet expression), there were a few who asked for tips to help them succeed. Obviously race-related information was prohibited, but there was no harm in suggesting that every time the teams leave the sea, it would be recommended that they water their nether regions. Anyone failing to heed such wisdom would be reduced to a painful shuffle in short order, one that would be readily identifiable by the cowboy gait at the finish line. Such chaffing is excruciating, compounded by the trickle of salty sweat that stings as it descends. And once it manifests, there’s no end to the sufferfests.

So study the video finishes, and shake your head sagely with deepest compassion. One only makes the mistake once. I know.