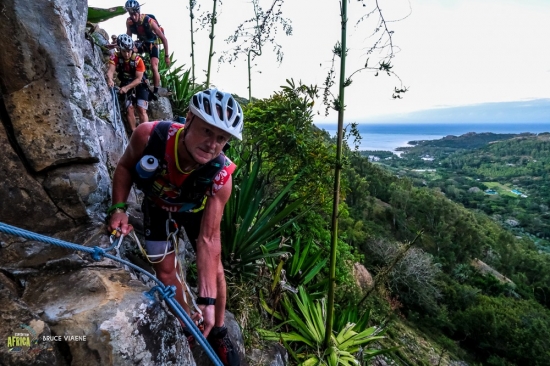 You know how rabbits prick up their ears, sniff the air, get all quivery when they sense something a-lurking? That’s how Day 3 ended. There’s excitement in the air, certainty is no longer certain, and the Russians are coming! Or maybe the Merrells. But not definitely the Swedes.

At dawn, we arrived at T6. Boats were scattered on the shore, teams off in pursuit of tortoises, caves and islands of Crab. Team Merrell were just setting out on the leg 17 paddle to T7. On their return from them caves, none of them could remember what discipline was next. Minds blank. Clean. Fortunately the glitch was dealt with, so paddling it was. Greener Adventure Team had left at 1am, KeyHealth Nevarest at 4:09, Blizzard at 4:24, and Merrell escaped the clutches of the transition at 5:08.

KHN’s boat had dragged anchor onshore thanks to the bare mast. The fishermen had warned this would happen, due to the incessant wind. At least that was the extent of their worries. Another team threw their anchor in correctly but forgot to ensure it was tied to the boat, which drifted off on the tide, and needed to be retrieved by the coastguard.

Jabberwock arrived at T6 ready for the paddle, and Craig Metherell was in a similar blur. He couldn’t remember “if it was long legs, short legs, left legs, right legs.” Tracey just wanted to get going. Team Domkrag were multiple stages behind, but when I asked which team Stella belonged to, she started to say Wally, her husband’s name. When they first checked into the TA, she asked whether it was T5? No, said Bruce, T6. “Ah, good”, was her reply.

I disturbed Bloed & Omo in the grounds of the Fisheries building, just behind the TA, and Daryl got up to say hello. He hadn’t been able to sleep properly thanks to the mice running around near his head, which he claimed were after his food. I wondered if the mice were real.

Heading out of the hamlet, I visited the shores opposite Crab Island, where teams had to swim a tasty 600m or so across the channel, grab 2 CPs, then return en route to the tortoise lair. Castlelite’s Craig Powell said he’d had dry shoes all of 5 minutes in the race. Apparently the relative healthiness of racers’ feet was due to the salinity. That’s what Plett AR’s Drew Scott claimed: saltwater doesn’t get absorbed the way fresh water does; rather, it dries things out. I have no idea so I’ll agree.

What I saw everywhere was the effect of that saltwater on chaffing, especially of the crotch area. In that vein, the Yeehaa! prize for obvious cowboy gait goes to XPD Holland (34), where the stride was wide, stroop waffles a birthday treat for team member Stijn Ribeek, and beers flowing. XPD Holland (54) joined in the cheers, then got back to groin damage control before the tortoise trek.

Sweaty Betty’s had made it to T6, where Michell Powell noted that the navigator can ask for anything, because they have such responsibility keeping their minds in the map. Barely minutes later, Nikki Smit walked up oblivious, asking, “Can you guys shake the sand from my shoes, please?”

Happy couple Lynette and Fritz were also freshly into transition. Lynette said her future husband “makes me work very hard for (the engagement ring)” by proposing during the race. The team had totally underestimated the toughness of the race, which is expected from newbies, but then truly appreciated the support and advice they were continually receiving from experienced teams. Hey, one tribe.

On the tired side, Fritz had spent 10 minutes this morning trying to find the CPs on the map in front of him. They were clearly printed in red. 😊

The bulk of my day was spent retracing loops between the caves, T6 and Crab Island, scootering down goat tracks, watching the endless to and fro of the same faces across different disciplines. Taking a breather was essential. One involved 4 locals calling me off my scooter to drink 33% Blue Diamond cane spirits and eat salted fish under an ancient tree. We barely spoke each other’s language, and google translate doesn’t like slurred pronunciation. No, I didn’t imbibe, but good times. I also saw two pigs being taken for a walk in the ocean. Not sleepmonsters.

Teams are starting to feel the strain. Fear of the sea isn’t helping. At the Crab island swim, we met many teams with one or two members needing serious convincing to enter the water, especially if they had done the swim-run from T4. We swam it to catch teams on the other side, and though the current was deceptively weak, it looked fast thanks to the wind chop. One person was quite teary after the return swim, saying her team “had saved her.”

As dusk was drawing in, word came that a drama was unfolding. It had seemed GAT had the race in the bag barring incident, and it came in form of a sandbar. Paddling from T7 out to Coco Island with a 3hr lead, they’d run foul of the tide, and could do nothing but wait. Looking on the bright side, they used the time effectively for sleeping and eating, and just as the tide rose sufficiently to resume paddling, Team Merrell appeared. Blizzard weren’t far behind.

T8 on Coco had them minutes apart. Into T9 at the Oasis Vacances hotel, all within 10 minutes, but crucially the Russians emerged first. The race to the via ferrata bottleneck was on!

I skidded into T9 shortly after they left, and hightailed it with other media crew for the cliffs overlooking Baie aux Huitres. A brand-new operation not yet open to the public, the teams would be the first to use it in anger.

GAT overtook Merrell and Blizzard, but just before the cliffs, made a crucial mistake, overshooting a path. Standing by the edge, the Russians came storming down the grassy track, looking strong. Merrell were just a minute behind them. Both teams scrambled for their harnesses and biners. Blizzard won, and left a minute or so before Merrell.

Greener Adventure Team appeared within seconds. Frustrated, they geared up. Jonas was annoyed, then took back control, “We’ll overtake them afterwards.” He seemed confident.

I followed them from below as the teams traversed the cliff face, clipping the cables in the dark. All had switched on their head torches. Merrell and Blizzard were close together, GAT lagging.

The via ferrata ended with a short zipline, but I didn’t hang around. The rain was setting in, and there was no point joining the teams in their misery.

A stiff trek in dense bush across multiple summits lay crouched. Shrouded in drizzle, hill tops barely visible, it looked nasty. Stephan chuckled as he said the CPs would be hard. The very first was a fork in a stream in a ravine, with only one fork shown on the map but three in reality. I shivered and ran back to my scooter. The race was heating up, but I was cold, and no rest awaited the weary.