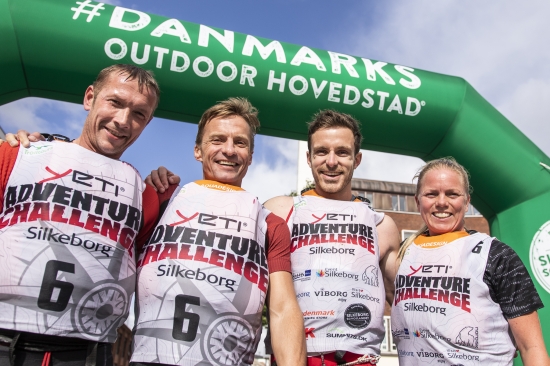 The prologue of the Yeti Adventure Challenge Silkeborg (YACS) delivered an action-packed hour of activities around the town center of Silkeborg. Teams’ timings decided their starting positions when the race started on the beach of Blokhus.

Before the prologue began in the main Silkeborg town square the race co-director and course designer, Simon Grimstrup, called each of the nine teams competing in the ‘Master’ race on stage. He introduced them to the large audience that had gathered and spoke a little about the highlights of the team. For example, team Masanga Racing is competing to raise funds for a hospital in Sierra Leone and two team members are Simon’s former students.

The team Roving Tukies is composed of four young New Zealand adventure racers who are currently travelling and racing in Europe. Team Salomon Adventure DK is missing a member as his wife is currently in labor and the team is racing with an all-male squad so they won’t be contenders for the podium.

Prior to the race start, Jacques Dehnbostel of the team said that with three guys racing they planned to get “trashed”, push each other hard, and mercilessly tease the first one who showed weakness. An experienced international racer in his twenties, with a shaved head, Jacques gives off a joyous wild child vibe that has yet to flail as we’ve come across the team on the course.

Team Kinsale from Ireland won their race entry in a lotto during the Basque Expedition race and said that they were looking forward to exploring Denmark. During the prologue, jogging from one activity to the next, they joked that they were just dot watchers that had fallen into this adventure.

SmARt endurance from Germany has a very experienced racer on their team; Lucas Moreno is currently working in Switzerland and he has raced with international teams around the world.

Racing Denmark Adventures also has a strong team who have experience on the international adventure racing stage.

The prologue activities included kayaking, a short swim in the river that goes through Silkeborg town center and rope works in the form of a climb up one of the walls of the municipal theatre.

The prologue done and dusted, teams quickly changed out of their wet gear in a large Nordisk tent set up for the race and boarded a bus to the start line.

It was approximately a two-hour drive to the start line and teams got their first looks at the race maps as they were distributed during the journey. The only information they’d had up to this point was the roadbook that was distributed during race registration.

The bus dropped the racers off on the beach outside of town of Blokus on the west coast. The wind was blowing fiercely as the racers sought a semblance of shelter outside a small building as they waited for the trackers to arrive and the race to begin.

When the trackers arrived, Simon Grimstrup lead the teams along the beach, drew a line in the sand and after a shouted countdown, the staggered race start began shortly after 20:00; an hour later than the initially announced starting time.

Daylight racing hours were in short commodity as the sun quickly set and bad weather set in.

Racers battled through fierce winds on the first biking stage.  Team Yeti was the first to arrive at TA1 at 00:05, with team Racing Denmark Adventures closely on their heels, arriving seven minutes later.

During the first night of racing, Mother Nature dished up quite a menu of bad weather with fierce winds, heavy rains and bone rattling thunder claps followed by blinding lightning. The weather conditions meant that the RD had to make some course adjustments that included cancelling the stand-up paddle that had been initially planned on the coast.

After the first night of racing the teams are now quite spread out over the course with the Danish teams racing strongly and the international teams currently a considerable distance behind as they are immersed in the wild west coast of Denmark. (There are so many surfing spots along the coast that the area is nicknamed "cold Hawaii" because apparently the waves are just as good not the temperatures, judging by the thickness of the surfers' wetsuits!)

The tracking has been working flawlessly but the tracking can’t show dot watchers how grim the weather has been. It’s a wild ride, welcome to Denmark!