Racing Denmark Adventures Upset The Reigning Champions For The Win 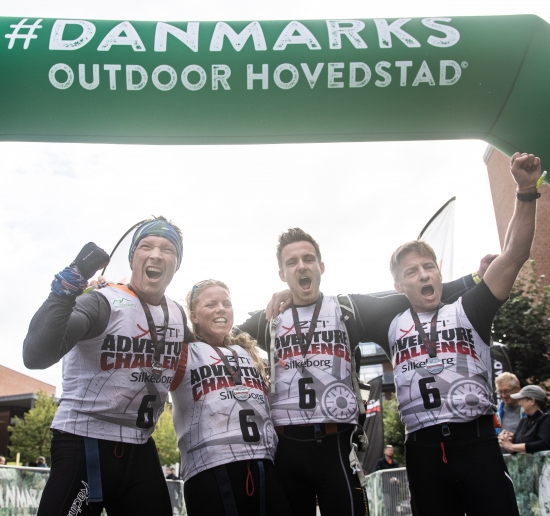 The 2019 edition of the Yeti Adventure Challenge Silkeborg (YACS) will likely go down in the annals of European adventure racing history as one of the toughest races due to the relentless weather conditions.

The organizers and volunteers calmly and competently met the challenges of frequent route changes, a cancelled section and several cancelled CPs and communicated those changes clearly to the teams on course as well as ensuring that their gear was in the proper location; no mean feat!

After all of the teams had been informed of the cancellation of section 8, (‘Sky Mountain’ in the road book), as well as the CP cancellations, the race director and crew headed to the finish line in Silkeborg.

The Yeti Adventure Challenge Silkeborg is comprised of three different distances: Master, Fighter and Challenger. SleepMonsters is here to cover the Master distance but the shorter distances also took place on Saturday around the town of Silkeborg, using the infrastructure set in place for the Master’s distance prologue.

Over 130 teams of three were competing in the Fighter and Challenger distances on Saturday and the finish line was shared with all three distances.

Returning to Silkeborg from the expedition length Master course and the wild west coast of Denmark was quite an experience. The city was oozing adventure athletes out of every pore as the Fighters and Challengers raced around collecting CPs, cheered on by what appeared to be the entire city.

The finish line was centrally located in a square between race sponsor’s office, the Yeti headquarters in Denmark, and the Radisson Blu hotel which is also a main partner of the event.

Music blared throughout the town, a stand served grilled sausages and cold beer on tap and two speakers roamed the city doing interviews and broadcasting live Facebook feeds while Anna Movin of the YACS organizing team directed her dedicated group of volunteers throughout the day and long into the night.

It was the coolest of parties and clearly illustrated why Silkeborg has come to be known as the ‘outdoor capital’ of Denmark. The Yeti organizing team and volunteers did a stellar job of organizing and executing all three distances.

The square began to buzz with an even higher level of excitement as the lead team on the Master course approached the finish line. The race winners, team Racing Denmark Adventures crossed the finish line late in the afternoon to a chorus of deafening cheers and applause.

As the victorious team they’d not only defeated the defending champions,Yeti, on their home turf, they’d also won their second Adventure Racing European Series (ARES) race this year, having also won The Beast in Ireland at the end of May.

Speaking to Camilla Gry Elmann at the finish line, her two-year old son with a glorious mop of blond hair wandered around the finish line banquet table as we chatted, sneaking snacks off the table under the watchful eye of his grandmother and father.

She spoke of their delight at clocking up this second win in the same racing season. She added that the team had learned at 19:00 the previous evening that team Yeti had withdrawn from the race and that this information was added motivation to keep pushing hard.

Camila added that she’d told her teammates that they would not relent on their hard push forward until they’d crossed the finish line as they were aware that team Masanaga was only a CP behind on the last mountain biking section; ‘Speeding Longer than Long’, 100kms. She said that she hates sprint finishes in expedition length races so she told her three teammates, “Come on guys, we’re going to do this right!”

Camila danced the Surf in her excitement at the podium so it was clear that she felt her team had 'done it right'.

Team Masanga Racing (Denmark) crossed the finish line in second place. They’d been racing to raise funds for a hospital in Sierra Leone and it was a special moment for the race director Simon Grimstrup as two of his former students were racing on the team. Three of the members of this squad were quite young and they had a slightly zombie like appearance as they floated around the finish line area, waiting for the prize giving ceremony.

Team Spirit AaA of Denmark came in third place. This race was the first time that Anna Kjaer Madsen had ever raced for so many hours non-stop. I was chatting at the finish line with her charming parents, explaining the origins of the name ‘SleepMonsters’. After the prize-giving ceremony her father began to explain sleepmonsters to his daughter and she enthusiastically interrupted him and launched into a detailed description of the extensive variety she’d seen during the race!

Seasoned adventure racer Klaus Jessen from the team also explained what had caused a moment of tracking panic during the last MTBing stage when the team started heading decidedly south and what appeared to be off course.

I’d been following the race with the independant referee, Simon Gregersen, from the Danish Adventure Racing Union (DARU). The RD had sent him to catch the three lead teams and inform them of the course changes so we’d patiently waited several hours at CP72 to give them this vital information.

After the first two lead teams had passed, been informed and signed the sheet of paper stating that they’d been given the information, we stared at the tracking on our phones with dismay as the third placed team headed way down south. Klaus explained that he and Anna had been having trouble sitting on their bike seats and that they’d been looking for a smooth road to alleviate pain; detour explained.

Team Kinsale (Ireland) crossed the finish line late at night in fifth place. They’d had to shunt sections and skip collecting some CPs but they were determined to finish the race. If they’d previously said at TA3 that they were “so over the rain”, at the finish line they said that they’d really enjoyed the second day of racing when the sun made a highly anticipated appearance.

Team Kinsale added that they’d done the last section 9, ‘Lakelands the final push’ in the dark and it had been a beautiful experience. The fog had settled over the water and it was a pea soup thick affair. They said that they’d needed to stay on compass at all times to collect the CPs as they were using a four person Canadian-style canoe and with four individuals rowing, it was very easy to get disoriented with zero visibility.

Team Kinsale also joked that Heather O’Brian would be started her own fashion house with a line of clothing created using black bin bags and that all styles had been tried and testing on this race!

Team SmARt endurance from Germany was the last team to cross the finish line in sixth place, this morning just one hour before the course closure. It was an impressive accomplishment for this team as team member Natasha Mina Muller had never previously raced an adventure race.

The weather conditions and the tricky navigation on this particular race make their accomplishment all the more laudable; or as a member of team Roving Tukies (NZ), described it, the “never ending misery.”

It has been a wild ride but everyone is in safely and the organizers and volunteers are taking a well-deserved rest after a Sunday morning cleanup. Of the nine teams that began the Master length YACS expedition length race, six crossed the finish line and three withdrew from the race.

All Yeti organizing eyes are now firmly focused on 2020 when the Yeti Adventure Challenge Silkeborg (YACS) will host the Adventure Racing European Series Championships. From all that I’ve observed during this 2019 edition, they are more than capable of smoothly and flawlessly delivering that challenge as well.