Raid Gaspesie 2019 - Days of Future Past 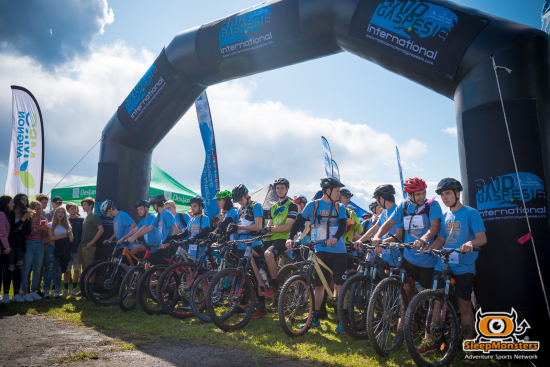 The 2019 Raid International Gaspesie has kicked off in fine style, as it always does, in Carleton-sur-Mer. The race registration and team presentation last night included the ever-present humour of the RiG, with fully laden support crews in the auditorium, neck brace and head bandaging for a grazed arm, and a magic descending caving ladder this year.

This, the 6th edition of the race, has been declared as the last, to much sadness from the crowd of both Canadian and international racers who've come to love the fast and furious stage race in a wild and beautiful part of the world. The race was originally supported and sponsored for three years, and has been extended three times to do 'just one more year', but with changes in regional government comes a change in priorities. All that said, Race Director Jean-Thomas Boily did hint at other things to come during his address at the race briefing, with the words "This is the last Raid Gaspesie, but not the last Adventure Race by Endurance Aventure..."

Anyway, both event team and racers are determined to make this last race a good one, and that begins with the Youth Prologue. 300 students from schools across the region are invited to come and race with the 'pros' for the opening stage of the Raid, with groups of students being allocated a full race team to pair with. The racing teams act as mentors for guidance and navigation around the Prologue course, with this year's 22km loop including two orienteering/rogaining sections, an open canoe stage, coasteering and some technical mountain biking. The young ladies paired with the Brou Aventuras team didn't seem to realise how much of a celebrity (locally and at home) they were riding with, despite wild cheers for the Brazilian team who've been here for all six editions of the race.

The course started with some stiff climbing, both on the bike and on foot. Rolling out from the start on bikes and climbing towards Mont St Joseph, the first transition onto a foot stage sent the racers up and even steeper climb, though mercifully short. Not everyone was enjoying the foot stage, and some found convenient excuses for a sit-down, mainly the 'someone else has the control card' excuse. They generally enjoyed the next section though, which plummeted back down the hill, repaying the air miles on the descent. Next came another short foot section, including one CP suspended atop a cargo net over a stream and culvert. Unexpectedly wet feet for some, even more unexpectedly wet other bits for those who lost their footing in the net. The race then swept onwards along the waterfront to the canoe stage, a short out-and-back around a bouy, though the increasing wind was hampering some teams best efforts. Next, a bit more water with the "you have to cross the road, but not cross over the road..." culvert walk, under the road with the bikes and even wetter feet, and then following side roads and ATV trails back up into the hills for a technical MTB section, some steep rooty descending back to the finish area.

The first teams began to hit the finish area, next to the Ecole Antoine-Bernard after a touch under two hours, with medals, food and official photos for all finishers. The young racers may not have known what Adventure Racing was before, but they've got a basic understanding now, and progression is always an option - as course planner Daniel Poirier put it, "we have teams here who raced the Youth Prologue at our first edition, now this year they are racing the 150km, the 300km course." That's a great legacy for the Raid to have build in this small area, and hopefully something comes along to fill the gap and allow this year's prologue participants somewhere to progress to for the future.

Known as 'Pyro'. An adventure racer & skilled paddler who says he's a 'picture taker and word herder'. He's reported for SleepMonsters for many years, including World Championships, the Alaska Expedition Race, and Raid Gaspesie in Canada. He'll get where he needs to be to get the story and some great photos and then he'll have a beer.

Raid Gaspesie 2019 - Thank You And Goodnight!
And so, the famous Raid International Gaspesie is complete. After six years, the organisation is moving on - hopefully to pastures new,

Raid International Gaspesie 2019 - And Now, The End Is Near ...
The final day of the final Raid Gaspesie ... sob.  As is normal for the RiG, the last day was a very early start, with the 300km

Raid Gaspesie 2019 - When The Rains Come
So, while Day One was warm, sunny and long, Day Two of the Raid InternationalGaspesie was cold, wet and short.  The weather at the

Raid Gaspesie 2019 - Down The Creek With A Paddle
Day one of the Raid International 2019 started cold and crisp, with racers and support crews huddled in down jackets as they went through

Spotlight on locals for the Raid international ...
Carleton-sur-Mer, September 9, 2019. – From September 12th to September 15th, the Société de