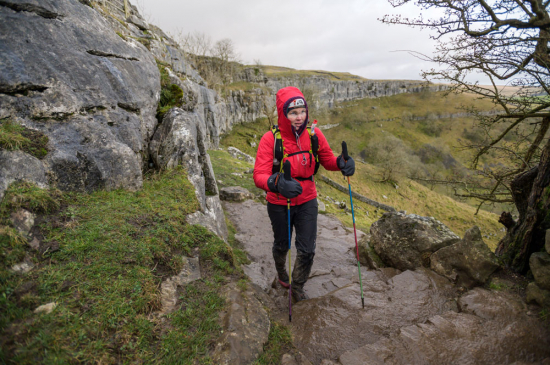 “I’m just going to run my own race and not worry about the others” said John Kelly (USA) just before the race.  It turns out ‘his own race’ lives up to the high expectations which surround this former winner of the extremely gruelling Barkley Marathons.  At the close of day one of the MONTANE Spine Race, John currently sits in the lead and has set a blistering pace – currently 40 minutes ahead of 2019 winner Jasmin Paris’ headline-grabbing, record breaking pace in last year’s event.

John sits just ahead of Eugenie Rosello Sole (ESP), a runner out for redemption after a heart-breaking DNF just 6km from the finish line last year.  Eugenie’s knowledge of this course could well count in his favour down the line as he has finished this race twice previously including a win in 2013.

Currently in 3rd is German runner Andre Hook, a relative newcomer compared to some of the runners he’s currently opening a lead on.  Behind him lie Spine legends such as Eoin Keith (IRL) who has two 2nd places and a win on this course to his name.

The overall winner of the Montane Spine Fusion, the summertime edition of the race, was Sabrina Verjee (GBR) who is currently first woman in the winter race.  Prior to the event Sabrina said, “It’s a really strong field this year so finishing is goal number one.  Beyond that, a sub 100hr time would be great.”  She is among a large group of runners who are currently on pace to do just that.

Sabrina currently has a commanding lead over Team GB 24hr runner, Debbie Martin Consani, though Debbie said from the start that this race "doesn’t really start until Tuesday or Wednesday".

When asked if he’d expected to do as well as he did, MONTANE Spine Challenger winner Doug Zinis (GBR) said, “No, I thought I’d be happy in the top ten.”  In fact he won the race with a lead of an hour over second placed David Hanna (GBR).

In 3rd was Chris Brookman (GBR) who crossed the line beside the first woman in the Challenger, Elaine Bisson (GBR).  Elaine ran an outstanding race having come in with a target of nothing more than "hopefully finishing" and "taking the race a mile at a time."

2nd woman over the line was the larger than life Sarah Witte.  When asked how she’d found #BritainsmostBrutal race she said, “Brutal doesn’t cut it. This race is something else.”  At the time of writing, 3rd woman Rebecca Lane is still on the course.

Parsons Gets Close To the MRT Challenge Record

“I don’t mind the dark and I don’t mind the wind and rain” said this year’s MRT Challenge winner Joe Parsons of Upper Wharfdale Fell Rescue Team, “so I cashed in on the bad conditions.”  His strong performance through the bad weather of the previous night saw him come within 6 minutes of breaking the MRT Challenge course record.

2nd placed Greg Crowley made Joe work for his medal, coming in only a few minutes behind in his 8th MONTANE Spine Race event.

“The Montane Spine Challenge has become a big date in the Mountain Rescue calendar.” said Julian Walden, Fundraising Officer for Mountain Rescue England and Wales. “We’ve had more than 30 team members taking part in the MRT Challenge and we’d like to say 'Thank you' to everyone involved in organising such an amazing event.”

Sabrina Verjee (GBR) Finishes As First Woman In The Montane ...
Sabrina Verjee has arrived in Kirk Yetholm and secured her place as 1st woman in the 2020 Montane Spine Race.  This follows her

The Montane Spine Challenger Kicks Off A Series Of ...
98 Competitors (78 men and 20 women) from 10 different nations are competing to cover 108 miles of the Pennine Way National Trail