SleepMonsters Editor Rob Howard spoke to Rob Preston in locked down Victoria, about his team’s race at Eco-Challenge Fiji. He was captain for Team Gippsland Adventure which comprised Rob and his wife Kathryn with Tim Boote and Kiwi racer Aaron Prince. Patrick Howlett was their team assistant.

“We’ve had quite a year for adventure racing here in Australia,” he said, “First it was bush fires, then Covid, and now a second round of cancellations. I’ve been out in the garage discharging and recharging my batteries because I’ve not used them since we were in Fiji!

“That’s almost a year ago now, but the time’s passed pretty quickly and it doesn’t seem like a year ago really.”

To start with I asked him about the difficulties of managing family life with two children and Mum and Dad both racing at Eco-Challenge.

“Well it’s difficult, but the kids are used to it!  They are often dragged on training outings and both sets of parents are really helpful.  My parents are keen followers of what we do and enjoy travelling. You’ll have met them at a few races.  So Kath’s parents had the kids first, then they flew to Sydney to my Mum and Dad and then they all came out to Fiji and enjoyed their time there. It went pretty smoothly. [Rob later added that when they do to training weekends, they only get to do half each!]

“We had a team change as Dave Schloss was entered in two teams. So we looked for another navigator and managed to persuade Aaron to join us as his team hadn’t taken up their place. We’d not raced together before, but go way back and his extra experience was invaluable. Otherwise we are close as Tim is only 2 hours away from us.

“There was a lot of communication with all the certification and getting all the gear there before the race, but once there it was what I expected, ten times bigger than any normal race with staff and cameras everywhere. On the financial side the race was much less of a risk for the commitment as they paid $50,000 per team to cover the expenses – though I guess there is no guarantee they will do that again. The $25,000 prize money helped too, but I thought it would have been more interesting to have a million dollars prize money for the winner, and not pay for the teams”

That prize money was for their 3rd place finish, which given the experience of the team was not a big surprise, however Preston said it was to the race crew.  “They didn’t necessarily know who anyone was, certainly not us and they were surprised we were doing so well.  We weren’t a featured team – the Australian team of Instagramers got a lot more attention than we did!  The media time wasn’t too bad as there were 66 teams and they had time-outs for any interviews at the 4 transitions. We’re not media hungry, but I hope they show us racing.

“We probably didn’t help much.  At one checkpoint Bear came running to meet us with his usual enthusiasm and Kathryn ran straight by him she was so intent on getting to the CP.  He seemed a bit taken aback.

“It was a good close race between a few teams but to take the story back to the beginning we had the worst start. Our boat was hit and punctured and we had to stop and repair it so we were last by about 45 minutes from the start! I was pretty stressed to be in that position after 6 months prep and as we were patching it up with tape before going on the ocean for 100km!”

“I know now that the top teams just paddled as there was little wind but all we could see were sails ahead so we did try that, even though it was quite an effort to put the sails up. That first stage with all the outrigger paddling and then a big SUP paddle was very upper body intensive and it was easy to underestimate it. Luckily our training paid off.

“With 8 disciplines we knew you’d have to be a good all-rounder. We had to travel all the way to Melbourne to practice on an outrigger canoe but I’m glad we did it. And we bought SUP’s to train in the winter, and bought a sailing boat too, but it was nothing like those in Fiji. Even rope ascending is rare these days, and that too takes a lot of upper body strength.”

“We were back in amongst the leaders after the first stage but then came the storm as we were going into the canyon. I hope they got some shots of us there because we were right on our limit, but we are comfortable in the water.  I think we were the last to get through, with the Estonian and French teams behind us.  I think those behind us were stopped and we didn’t find out until 6 hours later, but that split the field and we were in the front 7 teams which was good for us.

“The others who were stopped ahead of us were already in local houses near the riverside so it allowed us to catch up, but we had less sleep.  Then it was a restart in the morning for the bili bili stage on the river. It was a great experience that night on a villager’s floor and all along the course there was fantastic hospitality. I think they said we went through 160 villages. It was a disadvantage to the Fijian teams as they were mobbed with hospitality everywhere they went! It really slowed them down.

“There was a 60km trek later where we were allowed to use porters or ponies or mules, and I didn’t like the idea, but in the end it was one of the most fun stages. We mostly chatted about rugby and farm life with the porters. We were with the New Zealand teams so it was quite a big posse and we dropped the camera man who couldn’t keep up. 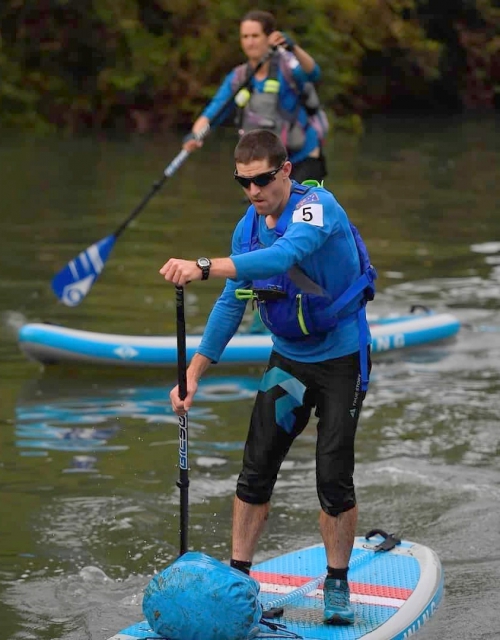 “We felt some of the racers who had been there before might have had a bit of an advantage as by all accounts much of the course was similar to 2002, nor was there much navigation which is one of our strengths. I also hadn’t expected them to have bili bili on the course as it was there last time, but it was a fun morning on the river with the helicopters buzzing us.

“We’d been really looking after ourselves taking a lot of sleep as we’d been told it was a 10 day course.  Mark Burnett said no one might finish it, but they really underestimated the teams as they didn’t know how far the sport has moved on in the last 17 years. So when we were given the maps for the 5th stage at the transition it was a shock to find it was only 24 hours to the finish. We’d been expecting another 3 days at least!” (There are no official results but the leaders finished in around 6 days.)

“Even so that last stage of outrigger sailing through the night was one of the toughest. Kath and Aaron were sick with infections and we wanted to get to the end before they got worse and I was steering and trying to stay awake. The team did some amazing nav, they paddled and I steered, and we made it. I think we were about 30 minutes behind the Canadians but sadly the family didn’t make it to see us on the finish line.

“Bear was enthusiastic greeting us on the finish line of course and asked Aaron if we’d expected to do so well. He just said ‘’yes’.”