A Thrilling Race To Beat The Time Cut-off 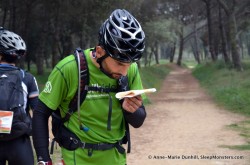 After the fun and games of the prologue, teams were able to relax in the municipal sports hall in Caldes de Malavella where the gear checks and registration had taken place. There were hot showers and several adventure racers took advantage of the amenities in anticipation of the efforts that lay ahead.

At 21:45 teams began biking up to the church square where the race would officially start. As it was a staggered start, the winners of the prologue, Euskat Raid Team, knew that when they began, they would have 18 hungry teams hot on their trail.

Bystanders from the town looked on as the church bells chimed; the race director gave the count down for the first team and the race was on. The last teams to start the race exited in a group at 23:00 and all faced a challenging night on the first mountain bike section.

Temperatures during the day had been in the upper 20’s but at night the temperatures dropped and a thick fog rolled in from the Mediterranean coast, complicating navigation. This has been an “old school” adventure race with no tracking or sport ident and no race bibs, just team numbers on squares of paper attached to the racers. Old school also added to the enjoyment of the photographers and journalists covering the race as they were unable to rely on technology to find teams, instead relying on good old fashioned mental timing calculations.

The first team to finish the first section and arrive in TA1 was Komando Fisiovilassar, getting in at 04:40, followed by Euskat Raid Team at 05:00 and Euskal Raid at 05:30. The transition area was in the municipal sports hall of Sant Gregori. The following sections would take place in a clover-leaf format with all teams coming back to the sports hall to transition to the next section.

The facilities were again top notch and teams could shelter, charge batteries, boil water, take showers and sleep in a warm covered area and several commented favorably afterwards about this aspect of the race organization.

Teams trickled throughout the morning and it was clear that the first section had been challenging. Marcos Muino Garcia (Tracktherace) said, “The night was difficult, the CPs were hard to find and there were too many choices of possible trails to take, but other than that, otherwise it was ok!”

Upon finishing the first 85km mountain biking section, teams headed out to a 6km orienteering section (this section was a fixed course that was part of the Sant Gregori sporting facilities). It was a bit unnerving that two rifle carrying hunters and their dog were on this section at the same time and the media jumped out of their skin when a shot rang out nearby; the racers seemed to be oblivious.

Happy to report that all racers safely completed the section and transitioned on foot to a 19km kayak section. The first three teams to arrive at the start of the kayak section were Euskat, Euskal and Blackhill-Opava.net, arriving seconds apart. The first team entered the water at 08:05. The fog hadn’t lifted yet and the muted autumn colors lent an otherworldly atmosphere to the slow moving river.

Slow moving was to become the catch word for this section. Prior to the race, the organizers had filled out the proper paper work to have the electricity company release water from a dam further upstream but this did not happen, much to the frustration of the RD.

The lack of water made the section agonizingly slow going. A member of the team Absolu Raid Vachettes jokingly asked SleepMonsters afterwards, “ Were you able to get any pictures of teams sitting in the kayaks or were they all of teams standing up in the water?” This threw the race timings off as teams took much longer to complete the section but the RD was very proactive and cancelled two CPs (49 and 50) which would have taken at least two hours to collect, in a later section.

The sports hall in Sant Gregori continued to be a hive of activity as teams came in and out to complete sections 4 (trek and orienteering) and 5 (mountain biking). After the fifth section teams were given the rest of the maps for sections 6-10.

There was a 19:00 time cut off for teams aiming for the full course and there was a wonderful moment of high drama as the two Basque teams, Euskal and Euskat, rushed to be out of the sports hall by the deadline. In the adrenaline of the moment, the RD exclaimed, ‘This is why I love adventure racing!”

Euskal, laden down with food, collected the maps and collapsed in a collective heap right outside of the sports hall. One of their members looked particularly dazed as he muttered over and over, “What a section.”

Only three teams made the 19:00 cut off; Black Hill-Opava.net, Euskal and Euskat and then the racing truly began as teams further back had to begin to make strategic decisions concerning which CPs to collect and which sections to skip.