Champions And Contenders For The World Title 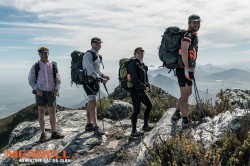 The team list for ARWC 2018-Reunion has 64 names on it. Some are there for the experience, some have won a place as a World Series race winner this year or as European Champions, others are contenders for a top 20, top 10, top 5 or podium place.

They’ll have their own team targets and some may even tell me what these are when I speak to them before the race.  Others will prefer to keep their own counsel.  Any of those with the skill, experience and endurance to finish top 10 will either be thinking about the possibility of winning or trying to put that idea out of their minds!

At most world champs there are a few who realistically stand a chance of claiming the title ... but this time around there are more than a few.  It could be a Dotwatchers’ dream as it promises to be an intense and highly competitive race.

But ... a new team taking the title will have to dislodge Avaya (NZ), who have won the last 4 world titles in a row racing as Team Seagate.  They are rarely beaten in international racing, and have put a very big gap between themselves and any chasers at recent World Champs.  (I was going to say ‘shown a clean pair of heels’ ... but that’s not very apt for AR.)  They have won 5 of the last 6 word titles and even in the year out (2013 in Ecuador) Stu Lynch was on the winning team.

They are favourites no doubt of that, but the contenders will wonder if, or when, they will falter, make a big mistake, suffer an injury, or simply slow down a bit!

For this race long standing team captain Nathan Fa’avae comes out of retirement to race with the team once again.

“We are really looking forward to Reunion,” he said, “as it looks like such a dynamic and vibrant place to explore and visit. The name itself has some meaning to us as I haven’t raced with the guys since Australia 2016 - so that will be fun.

“Overall I’d say our build up has gone very well so we’re expecting to be racing at our optimum, which we felt was very important as it feels to us like this will be the most competitive ARWC for some years.”

He is back racing with Stuart Lynch and Chris Forne again, but injury has forced a fairly late change with Jo Williams breaking her ankle while skiing at the end of September.  She is replaced by Fleur Pawsey, who hasn’t raced with the team before but knows them well and has raced with Lynch before.  One of the great strengths of Avaya is that they can call on such high class replacements from within the Kiwi racing circuit should they need to.

She is one of New Zealand’s top female multisport racers and raced ARWC in Spain, captained a team in Abu Dhabi, and has raced XPD and in China several times. However, she’s not raced internationally since 2010 and came into the race with only 6 weeks notice.

The obvious place to look for likely challengers is among the World Series winners this year and the top ARWS ranked teams.

The new #2 world ranked team are Estonian ACE Adventure who won a place taking the European Championship title at Raid Aran earlier this year. They have been highly placed at the World Champs in the past and been one of the teams to compete most regularly in recent years.  They bring the same team which won Raid Aran to Reunion. (Silver  and Rain Eensaar, Timmo Tammemäe & Reeda Tuula.)

Silver Eensaar summed up their preparation and chances with these comments.

“Reeda is a new addition to team this year and has not done any world championship races, but has been a fantastic companion and competitor in the two successful races we have had this year – Raid Aran & Nordic Islands AR. These races went very smooth for us without any serious issues or mistakes, so maybe it’s a quality sign and shows the experience we have now.

“As we are from a flat country (highest point 318m, highest single slope 65m) we can’t expect easy going at the race although the stats of the course are pretty similar to Raid Aran in Pyrenees. Uphill biking will be our biggest challenge compared to the strong teams that live in mountainous countries.

“We are all healthy and have had good training. As always we hope to take advantage of our navigating skills and the fact that we have 3 rogaining world champions on the team so we can pass the navigation on when too tired.”

There are 5 World Series winners in the line up from this year; Team Columbia (ESP), Swedish Armed Forces Adventure, ri-Adventure Antelopes (AUS), Blizzard (Russia), and Movistar Terra Aventura (ECU).  Of these SAFAT, Columbia and Movistar are all top 10 ranked teams and have the most ARWS experience behind them.

That’s 8 potential challengers for the title, but there are more.  In the strong Swedish entry are Haglofs Silva, who have more experience than almost any other team and are world ranked #3 (alongside Estonian ACE Adventure).  They have also beaten Seagate in an ARWS race (Raid Gallaecia).

There is big entry from South Africa too (the closest country to Reunion with an established AR calendar) and the 3 most successful and experienced teams are Merrell Adventure Addicts, Cyanosis and Sanlam Painted Wolf.  The latter were in the mix in the final stages at ARWC 2016, Cyanosis have won a World Series race in the past and Merrell have been led the way in South African racing for many years.

We are a long way into this article ... and I’ve not mentioned the French teams yet, who are technically on ‘home ground’ and are competing at a Raid in France after all.

There is a strong entry as you might expect, lead by 400Team Naturex who are world ranked #6.  Also in the top 20 rankings are Agde Raid Adventure (11th) and FMR (12th+).  Both Naturex and FMR have won ARWS races, and then there are Lozere Team2Raid, who were racing for a podium spot at ARWC Wyoming last and had to withdraw at the last TA.

Team captain Nicolas Rambier says; “The team is nearly the same as in ARWC last year in Wyoming, Fanny Frechinet, Maxime Brajon and Nicolas Rambier, except our orienteer Benjamin Monier can’t come, so it's Rudy Gouy on the map instead. He is the former Quechua team captain, and was World Champion in 2005.

“Everyone in the team has good technical skills in mountain biking, ropes, whitewater, which will be a real asset on Reunion Island. We were a bit disappointed about last year after retiring 3 hours from finish the line so this year we expect to take our revenge and enjoy this wonderful island.”

Who else? Uruguay Natural US are the current #1 ranked team in South America,and there is one other kiwi team racing. Team Yealands have won Godzone, and that is not easy to do!  And flying the flag of Hong Kong are The North Face Adventure Team. They have been dominant in Asian multisport for many years and for this race have the considerable ARWS experience of Brazilian racers Guilherme Pahl and Camila Nicolau to call on.

So, pick you favourites and watch the dots move in the days ahead, its going to be a great race!