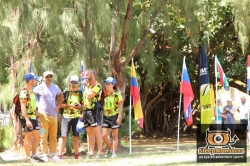 The atmosphere at the race HQ for ARWC2018 is relaxed compared to most previous World Champs, but it would be hard to be anything else in this climate and setting.  The race is based at the ‘Village de Corail’ in the resort of Saint Gilles and it’s a beach side holiday resort with plenty of space, a pool and simple chalet accommodation for the teams. Everything is contained within the compact grounds which are landscaped with palms and jacarandas in bloom

Each team has two adjoining air conditioned chalets with a kitchen which doubles as a veranda, so they can lay out all their gear and cook food from the supermarket just around the corner.  There is plenty of room for them to spread out and prepare for the race, so it’s an ideal set up.

The race has built a village within a village for the welcome area which teams have been passing though these past couple of days for registration and administration. There is a gear shop here and teams have been posing against photographic back-drops of the island set up in the corner.

Just behind it is the equipment area for bike preparation and in the corner of this here is the shipping container which Raid in France sent out months ago with all the race equipment. (This will become a secure lock up for the bags teams leave once the race starts.)

Teams are busy prepping bikes and rafts, shopping and packing, and the heat and humidity are high (around 28C) so there is good reason not to rush around pre-race.

They are doing ropes checks as well, and this has been set up in a huge tree alongside the race village. It looks like a mangrove and the racers are climbing around in a mass of aerial roots and branches, just a few feet off the ground.

There are lots of staff on hand to assist (the race has over 100 volunteers) and plenty of time to get everything done.  The schedule is for the race briefing to take place at 16.30, followed by the opening ceremony at 18.00. Then tomorrow the teams will board buses for the start town of Hell-Bourg where there is an afternoon prologue and they stay overnight, before race start at 06.00 on the 8th.