An International Podium For Raid Gallaecia 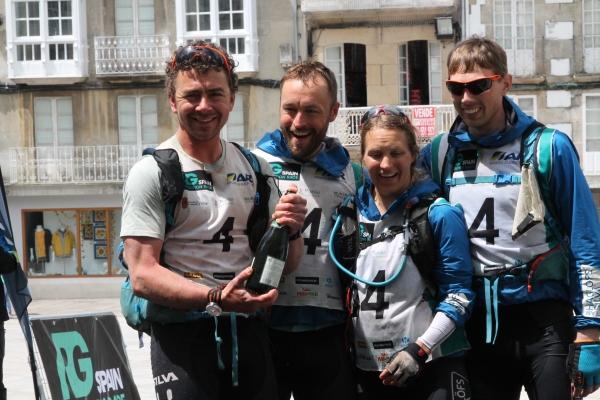 It has been a 3 way battle between teams from Denmark, Sweden and France for the past 3 and a half days at Raid Gallaecia, and after an epic battle it was Team Yeti of Denmark who came out the winners.

That left the final two podium places to be decided this afternoon and Team ARSweden held onto their second place.  They had lead for much of the time but and took a gamble on the third night of the race.

“We decided not to sleep and push on, and it was a risk which failed,” said team captain Bjorn Rydvall. “We have done it before at races on the third night, and we’d had 2 hours sleep on the second night, but it didn’t work this time.  During the first half of last night our pace was good, but then we really slowed down and Yeti passed us. It was a tough finish for us.”

“We made some silly mistakes on the navigation during the race and will have to look at why that is. Maybe as the navigation was so intense we relaxed when it looked a bit easier.  We underperformed by our standards, but Yeti really deserved their win for such a great race. They were the strongest team.

“I do think it was one of the best courses I’ve done anywhere in the world,” he added. “You could see how much work had been put into planning and mapping the route for us.”

He was stood with the team and Josefina Vikberg was rubbing a swollen stomach.  “She had some infection for the past few days,” Rydvall said, “she has been really tough.”

Mattias Nystrom was changing as quickly as he could on the finish line as he was shaking from the cold after the final kayak.  “It was really rough out there when the wind got up,” he said, “and I was at the front and became very cold.”

Erik Rahimi, who was new on the team said, “It was a privilege to race with these guys and I really enjoyed it.”  He held his own and said he had no problems with racing through the third night, and was even carrying the heaviest pack for the team. “I am the moose” he said, which is obviously Swedish for ‘packhorse’.

400 Team Naturex had looked at one point like they might close the gap on AR Sweden but fell back again on the final stage. They came into the town square at a slow walk and were quite dispirited at the finish as they had hoped for a better result.  The most animated was Audrey Ehanno when she saw the pizza! Her eyes opened wide and she gave the marshal who had just put it down a huge hug!

Once they have rested up and recovered from what has been a really tough race they can perhaps reflect on a good result against other world class teams.

Team Yeti of Denmark Win Raid Gallaecia
Raid Gallaecia takes place every two years, but it is definitely worth waiting for and this year the victors were the first ever Danish

Raid Gallaecia Comes To A Close
Raid Gallaecia came to a close with simple closing ceremony in the town hall of Viveiro today for the teams, organisers, sponsors and town

Getting to Viveiro and The Finish Line
After the excitement of the winners arrival yesterday teams continue to make their way into the finish at Plaza Mayor in Viveiro, some

Blisters at Burela
There as a rush of teams at Transition 5 at Burela this morning, with some arriving for, and others leaving on, the trek and

A Close Contest Into the Third Night of the Race
On the third afternoon of Raid Gallaecia the race at the front intensified.  The lead changing for a while and the top three teams are

Trekking on the Cantabrian Coast
The weather on day 3 Raid Gallaecia continues to be as good as it can get for this region in May. It’s a day of clear blue skies, 20C

Down the EO River to the Coast
The first paddling stage of Raid Gallaecia followed the Eo River, taking teams out into the Ria de Ribaldo estuary and to the coastal town

A Long Ride to Pontenova
The first night of Raid Gallaecia 2019 was a tough one for the teams as they followed the 133km cycle route to transition 3 at Pontenova,

Turbines and Transitions
Day one of Raid Gallaecia began with a short mountain biking stage, but it was long enough to introduce teams to nature of the race here in

Raid Gallaecia Sets Off in the Sunshine
Raid Gallaecia 2019 got underway at 10.00 on a beautiful sunny morning at the Area Recreativa de A Veiga in the village of Muras today. The

Exploring The Mountains and Coastline of Galicia
Raid Galaecia will explore the coasts and mountains of the region which gives the race its name, and in which the organizers take such

The Teams at Raid Gallaecia
Teams are now arriving at the coastal town of Viveiro in Northern Spain for the 4th edition of Raid Gallaecia, which is round 4 of this